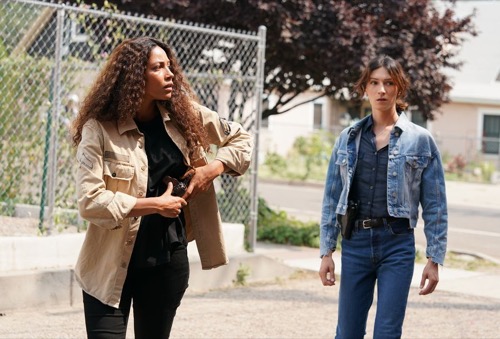 Tonight on ABC their new thriller by David E. Kelley, Big Sky airs with an all-new Thursday, September 30, 2021 episode and we have your Big Sky recap below.  On tonight’s Big Sky season 2 episode 1 ‘Wakey, Wakey,’ as per the ABC synopsis, “After Ronald’s escape, Cassie distracts herself with work at Dewell & Hoyt while Jenny, recovering from her near-death experience, decides to take Sheriff Tubb up on his offer for her to rejoin the force.

Yet, even as these two seem to move in different directions, it won’t be long before a mysterious accident leads them to cross paths. Elsewhere, Ronald is wrapped up in something he can’t get out of but who did the wrapping?”

Tonight’s episode begins with Jenny being wheeled into the hospital after being shot. Cassie is in a cruiser following Ronald but flashbacks of what he has done to her come back to haunt her. She reaches the city limits and stops.

Six weeks later; Jenny is home, she takes off her wedding ring and puts it on a shelf. She takes off some bandages that have blood on them from the wounds on her stomach.

We see a drug deal go down and one man gets shot dead.

Jenny decides to take Sherrif Tubb on his offer, she says she misses the badge. Tubb tells her that he would like to have someone like her on the team. He takes out a badge and asks her if she is in.

Cassie and Jerrie are in the office when Jenny walks in, she says she is just dropping by to see how things are going. Cassie tells her that she looks great. Then she tells her that Ronald is alive, she feels it. Jenny tells her they should meet up for a drink and talk later. Mark walks in and tells Cassie that he got a dog. He has a USB and says there is something on it that he might want to see. It’s a video of State Trooper Dewey, who leaves with Scarlett in a van. Cassie says maybe Dooley is in on the whole thing. They two get in Mark’s car and drive to Dewey’s house and Cassie and Mark approach him. Dewey tells Cassie to be careful, Ronald is gone, Scarlett is gone – they are watching everything.

Jenny is in the bar, Cassie shows up and says she went to speak to Dewey. Jenny tells her that she is leaving, not fully out, she won’t cash out, it is everything that has happened in the last year. Jenny reveals that she wants to wear the badge again and she wanted to make sure that she is ok with that. She goes on to say that she wants to get stuff done and the badge will do that. They toast to still being partners. Cassie leaves.

Cassie gets home and has Max at home babysitting, she offers to take her home. In the truck, they talk about Max’s family, she says her mom has a new boyfriend named T-Lock and he is a jobless loser. Max arrives home, T-Loc asks her how much she made. She gives him the money, takes some, and gives her a bit. He tells her they are building a future together and everyone has to pay their way. Max gets a text from Harper and sneaks out.

Travis shows up at Jenny’s house, they bumped into each other at the bar. He tells her that he is up to another drink if she invites him in. Travis is working undercover, he tells her that he is sorry about Cody, he cannot imagine how she felt. She tells him that she takes it day by day. He asks about her son, she tells him that he just left for college. He says he settled down for a bit, came back from a long assignment and she was gone. Jenny is feeling pain, she tells him that she was shot a few weeks ago. He asks her where she got shot, she says right below her chest, guess she was lucky. He kisses her and she straddles him and they continue kissing.

Maxi is in the woods with Harper and other friends, they are making tattoos in the dark. Harper tells Max that her stepmom sucks, Max says they are two peas in a pod. When the drug deal went down the guy who got shot looked dead, but apparently he wasn’t. He was put in a plastic bag and thrown on the back seat of a truck. The truck goes driving down the road and the supposed dead guy gets up and attacks the guy who shot him that is driving the truck. The truck crashes close to where the kids are. Once the truck stops the kids run to see if they can help if someone is hurt and the driver is on the ground, he tells them to take the bags or “they” will kill them. The kids grab the bags and run. Then we see a man walk down to the accident scene, he is whistling “Farmer In The Dell,” and he shoots the driver who was still alive, then leaves.

Max arrives home and sees T-Lock arguing with her mother. She goes into the garage and hides the bags under the floorboards of their shed.

The next day, Max and her friends meet, she says she counted the money, there is five hundred thousand dollars. Hunter says the money can change their lives. Max tells them they are too deep into this to call the cops, they should just sit tight. They hear a noise, someone was watching them.

Jenny arrives in the sheriff’s office, she tells him that she is not wearing an ugly uniform. Tubbs gives her a case, he has her go out to the crash site.

We see a man who lives on a farm who is a dead ringer for Rick Legarski and he is holding Ronald captive. He has him in a locked room with a metal collar attached to his neck with a chain.