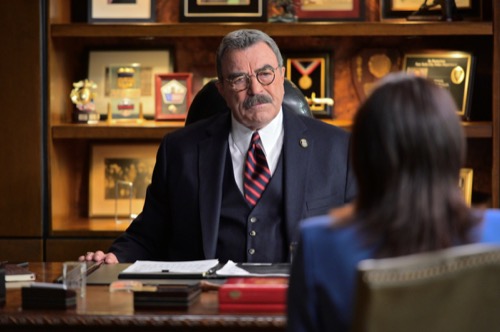 Tonight on CBS their hit drama starring Tom Selleck Blue Bloods airs an all-new Friday, May 14, 2021, episode and we have your Blue Bloods recap below. On tonight’s Blue Bloods Season 11 Episode 16 Finale “Justifies the Means,” as per the CBS synopsis, “After Danny discovers his nephew has been working undercover within a gunrunning organization for the ATF and his cover may be blown, the Reagan family bands together to prevent him from being killed in the line of duty like his father..”

On tonight’s Blue Bloods episode begins at the Reagan house, the family gathers together. Sean asks if anyone is wishing that he never found Joe in the first place. Danny says that two heads are better than one, there are six here and some of them didn’t make the cut, four of them were cut out. Jamie tells Danny that he is out of line. Danny says they sent Joe out there without all the brains or backup that he has at his disposal with this family.

Frank gets a call, he has confirmed that the body in the car wasn’t Joe – everybody is relieved. Frank says at least there is reason to think they might hear from him. Henry says he is ordering pizza, he can’t take another funeral. He can’t bury another one of them, whatever it takes from each of them, bring him back alive.

Jamie and Danny are out on the street looking around where the car was found, he finds a cell phone. Jamie gets a text, he says that every time Joe uses is credit card he gets the text, he knows where he just used it. They head out to find him.

Frank is with Webber, he tells her that Joe Hill is his grandson.

Danny and Jamie are at the gas station, they ask the manager if they can look at the video footage. They play it and Joe gives them a message that he is ok, he is still driving the vehicle with the tracker on it.

Erin has an idea, what if she gets a warrant to search Max’s apartment. Danny asks her if she has any reason to think his girlfriend is connected to his criminal activities because if she doesn’t they don’t have probable cause and she has a right to her privacy.

Joe and Ty are in a motel room when Evans rushes the door with a gun aimed at them, he says he is a friend of Kenny and he had a hunch, he thinks they are both cops and tells them to throw down their guns. All of a sudden, Joe has a backup gun, he pulls it out and shoots Evans in the leg, twice and he says cops have backup guns. Ty is shocked, he turns to Joe and says you’re a cop, Joe says yes, and I just saved your life.

Sid and Abigail go in to see Frank and she tells him that he has to eat. He says he appreciates it but he has no appetite, it is just one of those times, nothing to do but wait and he is kind of superstitious about it.

Erin tells Anthony that if the judge declines the request for the warrant they are in trouble.

Ty is in the car with Joe, he is furious that joe is a cop. He pulls over and takes a walk. Joe gets out and says he can work with him, or he can spend the rest of his life living his life like Evans. Joe shoots the ground repeatedly, he wants information from Ty.

Jamie and Danny track another gas station, joe held up a map to the surveillance camera. Kenny Cook and his men arrive there, Danny puts something in their tanks, and their engines cease.

Webber agrees to work with Frank and his department, he tells her that he is communicating through the surveillance. Danny and Jamie call Frank.

Anthony and Erin are outside Max’s apartment, Anthony says he is going in without a warrant, she just needs to watch his girlfriend as she leaves the apartment.

Henry and Frank are eating leftover pizza, Henry tells him the secret is putting the slice in a pan with a bit of oil. Erin arrives, she tells them they searched Max’s apartment. Frank tells her to please say she got a warrant, she says she got a warrant, from the ghost of their brother Joe.

Danny tells Jamie that maybe Joe has the same blind spot as their brother had, thinks he can see the line between fearless and reckless. They arrive at another gas station, they both go in this time to look at the security footage, and there near them, is Joe who says he is sorry about all the hide and seek. Joe says he knows they are there to take him in, but he needs about twelve more hours. He is only asking them for the same thing they would ask for. Joe says he is driving a black Camero with Connecticut plates, if he loses them he will wait at the next mile marker – he tells them if they need gas, to fill up now.

In Frank’s office, Webber says there is a sentencing hearing that afternoon for a guy facing forty years for a drug trafficking charge, but she can’t connect them to anyone in the Moonshine crew. She has agents concentrating in the area. Webber gets a call, she says her team is flying to Portsmith and her director has asked if Frank wants to join them, he declines the offer.

Ty arrives at Abraham Hills Farm, they find a pickup full of guns, Ty says they were going to take down a federal courthouse. They all grab guns when they see other picks arrive, it is Kenny’s men – shots are fired. Joe runs to the other side, they cover him and he is ok. The shots are coming from all sides. There is one guy on the roof, Danny gets him. Kenny pulls up. Ty is shot and so is Joe. They hear sirens, Kenny leaves. Ty is dead, he got two shots to the chest. Joe seems ok.

At the Reagan house, Frank tells Joe to look under his plate, there is the charm of St. Jude that belonged to his father. Joe says he is sorry that he didn’t show up that one time, he was way out of his wheelhouse and, he doesn’t know. Danny says he now appears to be sociable after running from a bunch of thugs. Henry asks Joe if he is the new black sheep of the family. Frank says they are all black sheep and Henry says he is the distinguished silver sheep. Frank says Joe is special, he is truly his father’s son. There is no better thing.