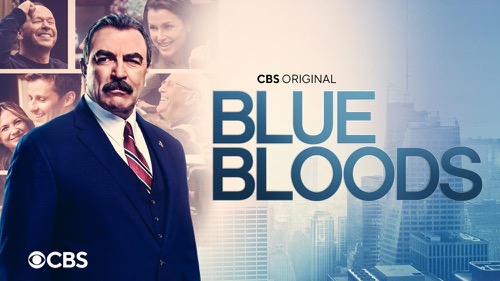 Tonight on CBS their hit drama starring Tom Selleck Blue Bloods airs an all-new Friday, October 1, 2021, episode and we have your Blue Bloods recap below. On tonight’s Blue Bloods Season 12 Episode 1 Premiere “Hate Is Hate,” as per the CBS synopsis, “Danny consults a psychic to solve the murder of a young boy; Frank is at odds with the mayor over how best to protect the city from an uptick in crime following a high-profile shooting; Erin investigates a decades-old case.”

The episode begins with two boys in a school bus, they are talking about basketball when a guy in an SUV has road rage, pulls alongside the bus and pulls out a gun from the glove compartment, shoots towards the bus, and shoots the two kids.

Danny and Baez respond to multiple shots fired, one hit a kid in a stroller, Michael Carter, who is five years old. Michael’s father is there, he tells Danny if he knew who shot his son he would be dead right now. A five-year-old kid is shot in front of a courtyard in Harlem and nobody saw anything, Danny is disgusted. Elsewhere a guy goes into a deli and hasn’t enough to pay for the cigarettes that he wants, the clerk tells him to come back when he can pay for them and he gets angry starts banging the protective plexiglass, and throws things off the shelves. A lady runs out of the deli and calls two cops that are outside, Eddie and Witten. They try to apprehend the guy and cuff him but another guy comes outside and starts also being violent. Eddie takes control just as Jamie arrives on the scene, he tells Witten to put her gun away, she had it out.

Erin goes to speak to Kimberly and tells her she knows that the story was true that she witnessed a homicide as a teenager and she always regretted not coming forward. Erin tells her that there is no statute of limitation on murder, they can still get this guy.

Frank is with Elijah Chesnick’s mother in the hospital, he is one of the boys who was shot in the bus. Elijah Hoffman was killed, he was fifteen years old. The city is offering a ten thousand dollar reward for any information that leads to an arrest.

Frank tells the mayor that there is a reason why crime is on the rise.

The deli owners don’t want to lodge a complaint, Eddie is surprised and asked them if they want justice, the owner says he wants to be left alone.

Danny consults a psychic regarding the shooting of the five-year-old boy, he gives her a sock that he picked up which belonged to the boy. She tells Danny that it is the boy’s father, he is the key to the case, he is the reason for the shooting. She is getting rage, jealousy, that is all she has.

At the station, Witten finds out that she is being investigated for having her weapon out, someone in the crowd outside the deli made a complaint. Jamie goes to see captain Espinoza and he tells her that Witten did nothing wrong, she was assaulted. Espinoza says there is a video of citizens unarmed and a cop pulling a gun on them.

Danny and Baez question Michael Carter’s father, ask if he is affiliated with a gang, he says no and is annoyed that he is being questioned because his son is on a ventilator. He tells Danny there was this one guy that got annoyed that he had his music loud but told him to bugger off. Michael Carter doesn’t make it, his parents are devasted and Danny and Baez are looking on.

Eddie goes to see Witten at her apartment, she wanted to make sure that she was ok. She finds herself maxing out on junk food and vodka.

They found the guy who shot at the bus, Kenny Kilmer, he has been arrested before but gets off every time and he has been in and out of mental hospitals his whole life, his social media is full of rants about everyone. And, the mayor has scheduled a press conference in the morning to announce the shooters’ arrest.

Erin and Anthony meet with Latisha Harris, she is representing her mother. Anthony says they are taking a look at the murder of Reggie Lewis. Erin says they have an eyewitness. Latisha tells them that unless they are charging her mother, they are leaving. Anthony got the mother’s prints from a glass, he is going to run them to see if they match the prints on the gun.

Danny’s psychic visits him at the station and asks him how things are going. He tells her it is not the father who did it and she says she guarantees that it is, he is not looking in the right place. He says he is tired and frustrated.

At Sunday dinner, they talk about the school bus shooter. Erin asks Frank why he wasn’t at the press conference that the mayor held, Frank tells her she has to ask the mayor. Henry says it means the mayor is mad at him. Eddie asks if anyone ever felt like leaving the job like it is too much. Eddie says she thinks Witten may leave, she feels like nobody is on her side.

Erin and Anthony go back to see Kimberly and tell her that Sandra Harris gave them their alibi and the prints matched the ones on the gun, and they know she was best friends with Latisha, Sandra’s daughter. She watched her best friend’s mother kill her boyfriend and she didn’t come forward. Kimberly said she didn’t want Latisha to end up in the system. Nobody came forward because Reggie was abusive. She planned it, she did it, Kimberly watched it and did nothing, but she doesn’t regret it. She was protecting herself, her family, and her friend. Erin says she doesn’t know what to do with this. Kimberly tells her to arrest Sandra Harris.

Danny and Baez go to see Jason, Michael Carter’s biological father, he was the one that shot his own son by accident, he wasn’t aiming at him. They arrest him.

Danny goes to see his psychic and tells her that she was right regarding Michael Carter’s killer.

Jamie goes back to the deli, he is there to replace the plexiglass and he tells the owners he will have cops drop by a few times every day to check on them.

Anthony and Erin are out for a drink, she tells him that she regrets opening this case.

Danny goes out with his psychic friend to a karaoke bar. Danny volunteers to go up, he tells her he is going to have some fun. Danny does “Start Me Up,” by the Rolling Stones.