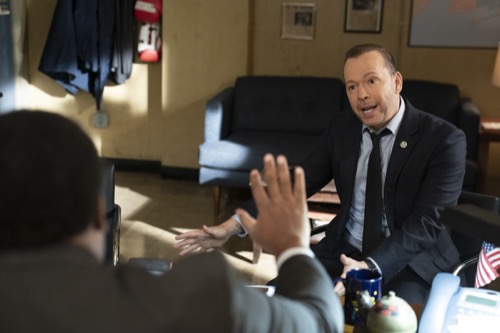 Tonight on CBS their hit drama starring Tom Selleck Blue Bloods airs an all-new Friday, February 5, 2021, episode and we have your Blue Bloods recap below. On tonight’s Blue Bloods Season 11 Episode 6 “The New Normal,” as per the CBS synopsis,“The Reagans confront hard choices on the job when Frank deals with a police captain who’s losing his grip over his precinct, and Danny faces backlash from the Baez and Internal Affairs over a tough call he made in the field.

Also, Jamie and Eddie are shown the ropes of field crisis management when a social worker is assigned to them for a ride-a-long, and Erin weighs the consequences of a dangerous criminal’s release under new bail laws.”

Frank is in his office with Abigail, Garrett and Sidney who give him an update on the city, all positive. Frank says crime is up in the Bronx. Frank wants to see Captain Keith Butler asap. Anthony tells Erin that William Maloney is in the schedule today and judge Enid Kramer might release him.

Jamie gives Witten and Jenko an assignment, violence interrupters. City councilor is doing a pilot program, taking these people on a ride along. Lawyer and social worker, Claire Gilmore shows up to ride with them.

Danny and Maria are on patrol, they get a call that an officer needs assistance and respond. Officer Wendell is standing with a man, Warren Pratt, who he was having a conflict with. Warren pushed Wendell who fell to the ground. Warren picked up Wendell’s fun, by the barrel, when Danny got out of his car, aimed his gun at him and ordered him to put down the gun.

Captain Keith Butler arrives to meet with Frank, Abigail is there and she is taping the conversation. Butler says his numbers are down, gang activity has been on the rise for the last seven months. Frank says the numbers says his officers are looking the other way. And, he lost two of his veteran officers in the last six months and that has caused problems as well. Frank tells him to fix it, re-establish discipline and effectiveness immediately.

Erin is in court, it is William Maloney’s time in court and his lawyer suggests that he be released on his own reconisance. Erin says the people appose ROR and request that the judge set bail, because of the defendants lengthy criminal record. The judge denies Erin’s request because of some new law, she says if she sets a bail of twenty thousand and a person who could afford it can get released can be set free, and the person that can’t afford goes to jail, and that is not fair. Erin plans to do anything she can to have him stay in jail.

Witten and Jenko are in the car on patrol with Claire Gilmore, they get a domestic dispute call that they have to answer. They arrive at an apartment, Donald Turner is a young man who is listening to music very loud, his mother, Susan asked him to turn it down and he wouldn’t. He has a mood disorder and sometimes his meds don’t work. Witten tells him to turn it down, doesn’t work. Claire tries, she tells Donald it is a great song, but he should try the headphones. He does and the sound is gone.

Lt. Mike Gee Calls Danny to his office, he asks him about what happened. Danny says he didn’t shoot the guy, he did it by the book. Officer Witten has made a complaint against Danny, Mike tells him to tell it to internal affairs. Then, Danny meets with IA. He says he didn’t shoot him because Pratt was holding the gun in a non-threatening matter. Danny says the bottom line is that if he shot Pratt it would have been an execution, and he is done. Danny walks out on them.

Witten and Jenko are having lunch with Claire and she tells them that mental illness is a medical illness and sometimes, a gun and a badge can make for a bad situation.

Erin and Anthony meet with William Maloney and his lawyer, Erin says she wants a guarantee that he won’t seek revenge against his girlfriend. When his girlfriend, Christina Rizzo, was giving her statement to the police, William said, “you’re dead, I will cut your lying throat you dirty little bitch.” William tells Erin that he is not going to hand her what she wants to keep him in Jail.

Frank stops by to see Sidney, he gives him report on Captain Keith Butler’s territory, there is a problem there.

Mike tells Danny that there was a homicide around the corner where Witten stopped Pratt, and the gun that was used matches the description of the gun Pratt stole.

Kimberly tells Erin that it was a failed stunt what she tried to do with William Maloney. His attorney filed a complaint against Erin saying that she tried to entrap her client. Erin says it is a joke. Kimberly asks her what it is about this case that is bothering her so much. Erin says it is the other people that he has hurt, Kimberly reminds her that they can only go after him for the present crime.

At dinner, the family is enjoying Henry’s pot roast, he says he put whiskey in it. Sean says he doesn’t know if he wants to go to college, Danny doesn’t want to hear it. Sean says just because you don’t go to college doesn’t make you a loser. Henry says he didn’t go because his parents couldn’t afford it. Frank gives Sean some advice, “you are not obligated to complete the work, but neither are you free to abandon it.”

Danny sits down with Henry for a drink and tells him what happened with Pratt. Danny says the Pratt may have killed someone after he let him go. Henry says they don’t shoot suspects because of what they might do. Henry tells Danny that if Pratt shot someone after, that is on him, not on Danny.

Captain Keith Butler returns to speak to Frank, he says he met with his command staff who came up with a game plan. Frank says they must have been glad to see him. Frank knows he hasn’t been spending time in the Bronx because he got another offer, New Castle chief of police.

Danny has been cleared by internal affairs, and there is a tip on the homicide.

William confronts his girlfriend, Christina Rizzo, she says she is sorry she called the police but she thought he was going to kill her. He lunges towards her and says he didn’t get the chance and that is why he is there. All of a sudden, Erin and Anthony are there, along with some other officers. Erin tells him that he will probably get ten years for the weapon, she wishes him the best.

Back at the Turner’s house, Donald is very upset and he hit his mother. Claire is there, she asks if she can try to talk him down. But in a sudden movement, he grabs Claire and puts a weapon to her throat. Jamie is there, he tries to calm Donald down, then Jenko distracts him and Jamie takes him down. Claire is shaken, Jenko tells her she did good and checks on her.

Kimberly tells Erin that she heard about William Maloney, she told her to walk away. She says she is sorry if Kimberly feels like she was crossing the line. Kimberly tells her that they are not bounty hunters, they are attorneys.

Danny tells Eddie that it looks like city council is going to pull the program because Claire almost got called. Eddie says having someone like that on a call can save lives.

Danny and Maria bring in Ruben Ramsey, roughly the same weight and height as Warren Pratt. Mike says Pratt turned himself in, and he wants to speak to Danny. In the questioning room, Pratt tells him that he takes care of his parents, they are all he has. When the officer tried to arrest him, he lost it. He says he didn’t get killed because of Danny and he will answer for what he did. Danny says he will take his statement. Pratt says he just wants a fair shot and he knows that he will get that with him.

Frank calls Sidney into his office, he asks him what he thinks about Butler. Sidney says that he deserves punishment, but not to be blown out of the water. Frank says for people who are thinking of deserting, he is the head on the pike.