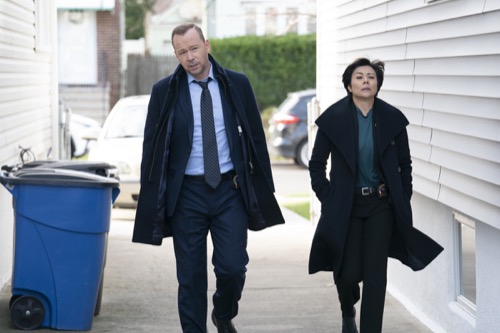 Tonight on CBS their hit drama starring Tom Selleck Blue Bloods airs an all-new Friday, February 12, 2021, episode and we have your Blue Bloods recap below. On tonight’s Blue Bloods Season 11 Episode 7 “In Too Deep,” as per the CBS synopsis,“After Danny witnesses a drive-by shooting, he butts heads with the detective assigned to the case.

Also, a childhood friend of Jamie’s is convinced that she has single-handedly solved a cold case murder, and Frank struggles to trust an ex-detective when he brings forth information about a suspected crime ring.”

Sid and Garrett are in the office with Frank when Abigail walks in, she asks him if he really wants to do this, former detective McKenzie is there. Garret tells Frank that in the public eye, McKenzie is a racist cop. Frank welcomes McKenzie in and tells him that Sid and Garret are staying. McKenzie says here is what Frank knows, there have been numerous robberies lately and they target jewelry and watch boutiques adjacent to protest routes. He has a theory he can back up. He took over his dad’s pawn shop, a man had been coming in the past couple of months he has expensive watches, he gained his confidence. He comes in with the goods the day after the protests, like clockwork. This guy and his crew work these stores like farmhands. Frank asks him why he came to him and not his old precinct. Frank tells McKenzie he is acting as he owes him something, McKenzie says Frank is acting like he doesn’t.

Jamie has a visitor at the station, it is Alison Gable who he hasn’t seen in years. She says six women were beaten and mutilated over six years and not a single arrest. No longer a cold case, she claims to have solved it.

Danny is putting the garbage out, when a red Lamborghini pulls up in front of his neighbor Sal’s house and shoots him right in front of Danny, then speeds off. Sal’s son comes out, Danny ells him to call 911 immediately and hurry up. Sal is taken away by ambulance, his son Scott sits on the steps. Danny asks what does he think happened, Scott asks him why he didn’t shoot at the car, Danny says he didn’t have his gun with him, he was putting out the trash in his pajamas. Danny tells him it happened so fast, but he promises Scott he will get who did this to his father.

Alison tells Jamie that she has a podcast, ten thousand followers, Murder in Manhattan, and she has been obsessed with these six women. She found the murderer, his name is Boris. Jamie wants to know what he can do for her. She says she wants Erin, she is the DA and when she sees her proof she is going to want it.

Boss tells Frank that he can’s work the case, Frank is upset. The lead detective is Judy Farrow.

Sid tells Frank that he has the evidence that McKenzie gave him, Garrett walks in and says the guy throws shade at the department every chance he gets. Frank says he is keeping an open mind, he had a part in his exit. Sid and Garrett get into an argument over it.

Judy questions Danny and he is annoyed. He tells her they are wasting valuable resources, he should be working the case.

Jamie gets Alison her meeting with Erin, she says she will take the file under advisement. Erin explains that they get a lot of evidence from people, they have to do their own investigation of the evidence. Anthony tells Danny that he should help him to go over everything, it will go faster, Anthony cringes but Erin loves the idea.

Danny goes to see Sal in the hospital, Scott is there and he is bitter that Danny is not working the case. Danny asks him if he has any beefs with anyone at his hardware store, just then Judy walks in and Danny says he is vising his neighbor, but Scott says he keeps drilling his father like he did something wrong.

Anthony and Jamie visit Boris, he has been in a wheelchair for eight years and says he is being harassed by Alison who says he committed those murders.

Danny is frustrated, he tells Maria, she tells him that you catch more bees with honey.

Jamie arrives home and Alison is there, he asks her how she knew where he lives. He holds her sweater and walks her to the door, he tells her it is date night. She leaves, and Eddie says he never mentioned her, he says now you know why – because he is over the top.

Danny apologizes to Judy, she says she is waiting for the other shoe to drop. She tells him the reason they couldn’t find the owner of the car, it was rented.

Frank visits McKenzie’s pawn shop, Frank says his reaction tells that he is telling the truth. The leads that he gave Garrett did not pan out. Then Frank says maybe they are part of the setup, McKenzie’s set up. McKenzie says he got information on an organized crime ring and he blames him. McKenzie tells Frank to get out of his shop, Frank said he is not his enemy, he never was.

Danny and Judy go to see Joel’s wife, Dawn, who is the person who the lease of Lamborghini was in. He was set to fly home and he didn’t get off the plane. Danny asks her how her husband went from a Volvo to a Lambo in no time at all. She says anything he did was not his fault. She says she thinks she needs a lawyer. She tells Danny that she shot Sal. She didn’t pull the trigger, but it is all her fault. She says her husband is wonderful, but she had a fling with Sal. She told her husband about it because she had a guilty conscious and he went and shot Sal.

Jamie goes to see Anthony and tells him that she thinks Alison’s whole thing is more about him than the murder case. Anthony shows Danny footage of Boris, where is in a wheelchair, and when he is walking; he is an insurance scammer and made women think he wasn’t a threat when he was in the wheelchair.

Garrett asks Frank what McKenzie is to him, Frank says he wouldn’t let him prove he was innocent. Sid walks in, they found enough evidence, Ron Watley was in that shop and he runs an auto shop in Hell’s Kitchen. Frank tells Sid to send a team after him and send one after McKenzie as well, for criminal possession and selling stolen property and make sure he is in the same cell as Watley.

Jamie goes to see Boris again, when Jamie shows his badge, Boris jumps out of the chair and at Jamie. Anthony is there, but they lose him. Alison calls Jamie, Boris calls her and he says he wants to do an interview.

Joel comes home, Danny and Judy are there. Scott runs across the street with a baseball bat, Judy takes him down and they arrest Joel.

Alison is in a cafe, Boris comes in with a knife but Jamie and Anthony are there. Later, Erin thanks Alison and tells her that Boris will be convicted of murder. She asks when she can interview him for her podcast, Erin says never.

Frank has a visit from McKenzie, he tells him that it is easier if the Watley’s in the world think that he is one of them. Frank tells him that he is giving him the benefit of the doubt, he hopes that he will give him the same. Frank pulls McKenzie’s badge out of his pocket, he thanks him and tells him he is glad to be back. Frank says that makes two of them.