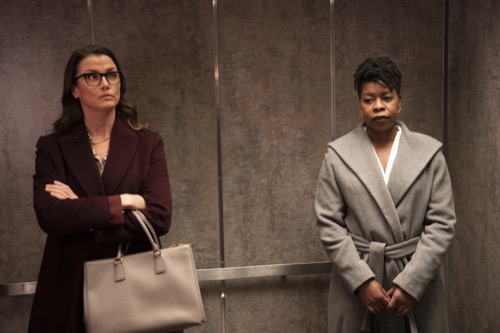 Tonight on CBS their hit drama starring Tom Selleck Blue Bloods airs an all-new Friday, March 5, 2021, episode and we have your Blue Bloods recap below. On tonight’s Blue Bloods Season 11 Episode 8 “More Than Meets the Eye,” as per the CBS synopsis, “Erin tries not to feel overpowered as her new boss shadows her at work just as she’s trying to get a nervous eye-witness to reveal the identity of who shot her boyfriend.

Also, the serial killer who previously held Danny and Baez hostage resurfaces, and when Jaime arrests an intrusive reporter who appears at a series of store lootings, it leads to a standoff between Frank and the Attorney General over the press’ First Amendment rights.”

In tonight’s episode of Blue Bloods Danny and Baez are on the scene of a crime, the body is found down by the water. A young girl, her name is Keisha, and a guy named Tori, are walking down a laneway when an SUV pulls up and shoots the guy five times in the back.

Meanwhile, Jamie and Eddie are on a case, they arrest a guy who has stolen from a store. A woman is taping it with her cell phone and says she is a reporter, she keeps getting in the way. Jamie arrests her for obstruction of justice.

Keisha is in an interview room with Erin, she asks her for her jacket that is full of blood. Keisha says Tori gave it to her. Erin explains that they need it for evidence. Keisha identifies the shooter as Malik, but Erin is overpowered by her new boss D.A. Kimberly Crawford, when she shadows her, or leads and scares off Keisha.

Robert Lewis is in Frank’s office regarding the fact that Jamie arrested a reporter. Robert says one million views and counting. Frank says she is a self-appointed reporter with a YouTube channel. Frank says he is not reversing this, she got in the way. He says she is claiming that she is being discriminated against. Frank tells him to take the door, he asks Frank how blind can he be.

Frank drops by to see Erin and tells her they need to talk. Erin introduces him to Kimberly, her new boss. He tells Erin that he has a case, a serial killer struck again, he suggested a joint investigation with Detective Raines in Nassau county. It would make it go a lot faster if she would sign an ADA.

Garrett reads some news to Frank, effective immediately the issuance of press passes will no longer be the responsibility of the NYPD, going forward all press passes will be issued by the mayor’s office. Franks asks to get the mayor on the phone, but he won’t take his calls. His assistant suggested that if Frank has questions, he should contact the attorney general.

Frank and Baez are working with Raines who gets into an argument with Baez because he makes a sarcastic comment about she and Frank were locked in the basement.

Jamie finds out that the D.A.’s office declined to prosecute the reporter, they had to return her phone and cut her loose. He calls Erin, but she can’t talk because she is with Kimberly. Kimberly tells Erin that if her bother has questions about it, he can call her.

Frank and Baez are at the morgue, there is a semen sample. She ran his DNA through the national database, he has killed at least ten women. The victims are teenagers, runaways.

Danny tells Baez that she is making this case personal and she is entering dangerous territory, he tells her not to get too emotional. She tells him that his victims answer his messages on social media regarding modeling gigs. He figures it will be less scrutiny, no family searching for them because they are runaways. They set him up, he thinks he is talking to a nineteen year old and he wants to meet, at a bar.

Anthony buys Erin donuts, Kimberly walks in and asks if there are any new leads. Kimberly tells Erin to issue a grand jury subpoena to Keisha and get her back in that office, it is the only shot they will have at her changing her mind.

Jamie responds to a shooting at a store, the owner is on the floor and he is shot. The reporter is there again with her cell phone and shouts at Jamie to help the guy. He asks her twice if she knows who shot him but she doesn’t answer.

Danny, Baez, and Raines are in a van hiding out, waiting for the guy to arrive at the bar. A pizza delivery guy knocks on the van, he says the man with a hat on told him to deliver it and there is a note attached to the pizza, it reads “you won’t catch me, enjoy your night.”

Keisha is back in the station with Erin, they come out of the elevator, and Tori’s mother is there, they almost bumped into each other, she tells Tori to tell them who killed Tori, Kimberly is with her. Later, Erin tells Kimberly that she knows she orchestrated the whole thing. Kimberly says so what and she doesn’t look at things from the Regan perspective.

Frank goes to see Robert, he tells him that he has his hands in everything, he got the charges dropped against the reporter. Robert says he went to see him first and he showed him the door. Frank tells him that his reporter was on the scene of yet another looting, the store owner was shot in the chest. Robert says if she didn’t shoot him, she has every right to be there. Frank tells him to remind himself whose side he is on.

At Sunday dinner, they talk about the reporter and Kimberly. Jamie tells her that he called her for help and she blew him off. Everyone is left frustrated and Henry says they should just go back to hating lawyers like they used to. Later, Frank and Erin sit down for a talk, she tells him that Frank and Jamie are a little too comfortable coming to her when they have problems. Frank asks her how she feels about being overlooked. She says she doesn’t know. Frank says maybe Kimberly thinks she has to prove herself to her. Erin says that sounds like a funhouse mirror without any fun.

Jamie just woke up, Eddie shows him a video of when the store owner was shot, she blurred all the faces. It is a crime and the reporter is the only witness.

Baez is on the road, she stops by a house, it is a location that pinged on some of the victim’s phones before they disappeared. She calls Danny, he tells her that he is coming to her right now and she should not do anything.

Keisha is in the station, Kimberly tells her that when she was fifteen she saw her best friend get killed, she did nothing because she was afraid. That decision was a death sentence for her, she has lived with that all her life, the shooter got away with it and she became a D.A. to make amends. Keisha starts crying, she says Malik did it.

Baez is still there, she runs the plates from the car in the driveway. She looks around a little more and sees blood in the snow, she pulls out her gun and calls for backup. She moves towards the house and there is more blood. She goes near the garage, the door is open, she goes inside and she is grabbed. The buy tries to put a plastic bag around her head and suffocate her. Baez fights, she hears Danny calling for her. Danny handcuffs the guy, he tells Baez to shoot. When she doesn’t he tells her she is weak like all the other women.

Robert drops by to see Frank, he tells Frank when are they going to move on. Frank says that he has the reporter’s phone records, he was her first call after her release. Frank tells him that he has his number now too. Robert says she is a friend. Frank has got him, Robert calls him down and dirty. Frank says he didn’t pick the fight. Robert tells him that he will talk to the mayor about the press passes.

Erin drops by to see Frank, Danny and Jamie are there, they all smile and makeup.