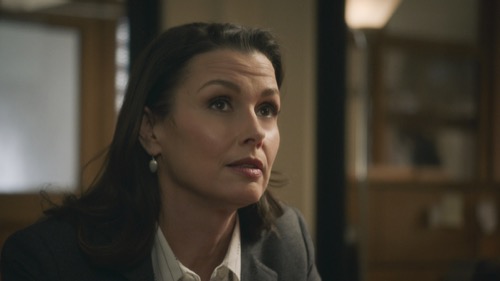 Tonight on CBS their hit drama starring Tom Selleck Blue Bloods airs an all-new Friday, April 9, 2021, episode and we have your Blue Bloods recap below. On tonight’s Blue Bloods Season 11 Episode 11 “Guardian Angels,” as per the CBS synopsis, “Frank takes matters into his own hands to save Gormley’s career when complaints against him become public knowledge; Danny and Baez learn to be allies when the transgender community comes under attack.”

In tonight’s episode of Blue Bloods, the episode begins with Danny and Baez arriving at a crime scene, 22-year old DOA, female, black and identified as Kayla Martin – she lived in 4A and her superintendent found her this morning, she was dropped in a garbage container. One of the neighbors said she recently transitioned, male to female, she was transgender.

Anthony shows Erin a video of a robbery at a shoe store, the perpetrator was taking a beating by Evan Brooks, a member of the urban defender safety patrol. Witnesses say the perp took the first punch, he is in the hospital with a broken face and internal bleeding. Erin doesn’t like it, the urban defenders are not cops. Erin says she will meet with Brooks and then decide if she will charge him.

Witten and Janko are on the scene with two other officers, some young men drinking and harassing pedestrians. One of the men hit the male officer square in the face, Witten and Janko take him down, his name is Tommy Simms. While that is happening, another female officer takes one of the perps by the throat and Janko tells her to let go, then she sees two guys on the street filming everything with their cell phones.

Sid is with Garrett, he is upset, they talk about some reports that have errors, Garrett tells him that he is sorry. Sid says the reports probably have some truth, but they are not accurate. Garrett tells him to tell Frank. They go see Frank and Garrett says the Daily News did a deep dive into every single NYPD disciplinary record made public. It was allowed and there is no going back. Their reporting focuses on excessive force by one cop with over twenty-five years of service, Sid. Online today, in print tomorrow and they wouldn’t share. Frank tells Sid that he has his back.

Danny and Baez go to see a girl at a coffee shop and tell her that her friend Keila was found outside of her building and she was her last contact. She says it is all her fault, she dragged Keila out to a bar last night they were hosting a trans night. She didn’t want to go, she was in the process of her transition and she just wanted her to have fun. She met a guy, athletic, six feet tall, and maybe in her thirties; she encouraged her. The guy wasn’t trans. She gives them the name of the bar.

Janko tells Jamie about the guy hitting the cop, he tells her the judge released him.

Erin meets with Brooks, she tells him that he put a man in the hospital. Brooks says it was a scary situation, he put himself in harm’s way to keep people safe. Brooks is a black belt. He tells her that he gets that she is doing her job, but that guy attacked him and he was just trying to save people.

Witten and Janko return to speak to Tommy Simms, he calls them “the two little piggies.” Another cop car pulls up, it is Jamie and he tells Tommy to leave. Janko tells Jamie that they got a call that he was at it again. Jamie tells them that they don’t do revenge, get back to work.

Danny and Baez go to the bar, they speak to a guy there who flirts with Danny. They tell him that they have reason to believe that someone was murdered with someone who they left with last night from this bar. He tells them that a million faces past this place and they don’t have any cameras. Danny leaves his business card and asks him to call if he remembers anything. Danny asks Baez if something is bothering her about this case, she says she doesn’t judge anyone, but she doesn’t get this whole transgender thing. Danny tells her that she doesn’t need to get it, they just need to solve this murder.

Frank goes to see the mayor, he says it’s been a while, he missed his little chats. Frank says Sid stays, the mayor says he goes. Frank says the accusations are decades old. Frank tells him to look at the context of each complaint. The mayor tells him to let him go and move on. He is good at policing, but he doesn’t play well with others, and sometimes the latter ways the former, and that point is right around the corner. The mayor asks if he is clear, Frank says he is, but he doesn’t know about him.

At the precinct, Ashley, Kayla’s friend, shows up to ask Danny if there are any updates on the case. She tells him that most cops don’t care when a trans is killed and this is a hate crime.

Mr. Ward drops by to talk to Erin about Brooks, he is part of the same group. Erin tells him that he is concerned that Brooks took this too far.

Ashley goes over some footage with Baez to see if she recognized anyone who left the bar. Danny walks in and tells them that there was a trans woman killed a few weeks ago named Marie, Ashley knew her. Ashley says she doesn’t think that she was officially transitioned on paper, so her death may be under her “dead name.” Ashley says it was Mark Adams. Baez checks the system and they have hit, detective Pete Castellano handled the case, Mark was strangled.

The governor is in the office, he is a fan of Brooks and he is there to have his say. Erin wants Brooks charged, the governor says that Brooks is a hero. Erin’s boss, Crawford, is there, she says it is a complicated case, she will study the file before she makes her decision. Erin goes back to see Anthony, she is not happy about the whole thing. Anthony tells Erin that he made some calls, Brooks is not just into karate, he has done some MMA fighting as well, some real bloody stuff. Anthony tells her she was right, Brooks is a time bomb.

Danny goes to see Castellano and asks him where he is on the case. He and Danny get into an argument, Danny tells him that while he was doing squat, another person was killed. Castellano gives the case file to Danny and tells him to enjoy it.

Sid goes to see Frank, he says the phone won’t stop ringing, people sound like he died. He tried to explain to Sheila, but people on the outside don’t get it. Frank tells him that the problem here is not him. Sid says the fact here is that he has to go, that is what the mayor wants. Frank says he runs the department.

Janko and Witten are off duty and leaving the precinct, they first pump each other go to get into their cars. As Janko is getting into her car, Tommy is there and he punches her in the face, he tells her that her partner is next. Witten hears the commotion and runs back to Janko to help her.

Danny goes to Ashley and tells her that the murders have the same MO, they think it was the same guy. Danny says they are going to put an undercover cop in the bar, Ashley volunteers to do it, she tells him that they will spot his guy within minutes. Danny gives in but tells her that it has to be his way.

At dinner, the family gets into an argument about what happened to Eddie, everyone apologizes to her for bringing it up. Gramps tells her to put a cold raw steak on it. Sean compares her to a girl in Kill Bill and tells her that she still looks hot and Danny cringes that he said his aunt was hot.

Sid and Garrett go see the mayor, Frank is not there. Sid tells him that he is going to go quietly, but when he gets the ax, it is going to cause a crisis in the morale amongst the cops, he needs to pick up this on his end, inspire the men and women to keep going, something good has to come out of this.

Erin meets with the governor, he is eating lunch at a restaurant. She tells him that Brooks should be charged in the first degree. The governor says the kid is a thug and deserves it for stealing. He says he got a call from Chris Ward, an old friend, that told him she disrespected the Urban Defenders.

Jamie and Janko go together to see Tommy, the information that he gave them so he could walk, it all checked out. Those dealers they do business with, they took them down last night thanks to him, they are out of business. He says they are even and thank him for his cooperation. Tommy’s three friends who are with him freak out and call him a rat.

Ashley is in the bar, Baez and Danny are listening and watching in. Ashley sees the guy, she smiles at him to get his attention. They go out back and the guy attacks her immediately, he says she is going to die like the others. Baez and Danny get there just in time to get him off of her and arrest him.

Crawford says she got a call from the governor he wants them to charge Brooks. Erin admits that she met with the governor, she got him to change his mind.

Frank holds a press conference and basically says that that the complaints against Sid are absurd, he shouldn’t go anywhere. And, if the people want him gone, he will hold the door for him, and follow him out.