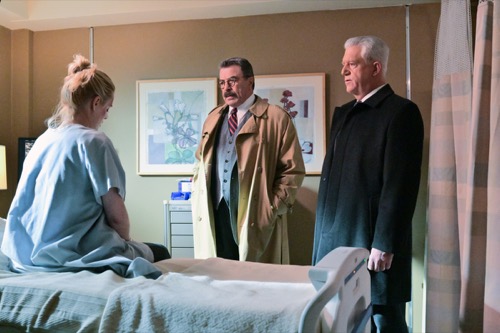 Tonight on CBS their hit drama starring Tom Selleck Blue Bloods airs an all-new Friday, April 16, 2021, episode and we have your Blue Bloods recap below. On tonight’s Blue Bloods Season 11 Episode 12 “Happy Endings,” as per the CBS synopsis, “Business becomes personal for Frank and his 1 Police Plaza team when Baker is assaulted on the street, as well as for Erin, when she asks her ex-husband, Jack Boyle (Peter Hermann), to represent a defendant she’s prosecuting.

Also, Eddie wonders if she’s being too stubborn after she publicly undermines one of Jamie’s decisions at work, and Danny and Baez investigate the attempted murder of a couple with huge secrets.”

The episode begins with Janko pulling a car over for going through a red light and when she asks the driver for his license and registration, she notices a gun on the backseat. She calls it and tells the two in the front of the car to put their hands on the dashboard. Witten tells them to get out of the car with their hands up. Both guys say the gun doesn’t belong to them. Jamie arrives on the scene, anti-crime is there and he gives the case to them. Janko is not happy, she says it is her caller.

Jamie tells her it is now their caller, let this one go. Meanwhile, the man pulled over has his mother speaking to Erin, and she begs her to help, her son doesn’t own a gun. The young men are Charles Hayes and Andrew Miles, they are in court. Eric tells the judge that the two were in possession of a loaded weapon. Andrew wants to make a statement, that the gun belongs to Charles. Charles starts shouting that it isn’t true and he has to be pulled out of the courtroom. Andrew is released, Charles will only be released on a bond of seven hundred fifty thousand dollars.

Danny and Baez arrive on the scene, one man and one female with gunshot wounds. The man is calling for Charlotte, they try to ask him questions. They are both in bad shape and they can’t get information from either of them.

Erin asks Boyle if he will take Andrew’s case so he doesn’t get railroaded. He asks her what he gets for taking this case, maybe something interesting. If he gets Andrew off, she goes away with him for a romantic weekend. She says ok, and if she wins, he has to come to a family dinner. He tells her that he wants to share love and she wants to inflict pain, but she is on.

Abigail is going home with groceries when she is attacked. Frank and Garrett visit her in the hospital. She says her hands were full of groceries, the guy blindsided her. She tells Frank that she will be in tomorrow and she doesn’t want to be treated with kid gloves, it would be worse than a broken nose.

Erin and Anthony are sitting across from Andrew and his lawyer and ask him how he knows the fun belongs to Charles. He says he doesn’t know. Anthony says he finds it fascinating that he didn’t see his friend bring a loaded gun into his car. Anthony tells Erin, ballistics came back on the gun, it is a match to two attempted murders yesterday.

Danny tells Baez they found the gun in the shooting. Baez says she called the hospital to see if they could go see the shooting victims and there is a US Marshall posted outside Romano’s room. Danny says it could only mean one thing, witness protection. Abigail says she should have been able to stop that guy in his tracks, it is time she moved on and she reminds Frank that he told her he would never stand in her way if she did.

The next morning, Frank arrives at the office and Abigail is there, she says she doesn’t want any special treatment. Frank tells her to stay. Frank tells her that special victims are handling the case, they believe he has attacked five other women.

Abigail is outside her apartment, when she sees Garrett, he tells her that she can’t work her own case.

Anthony is with Erin, he says he can’t believe that she got Boyle to represent Charles. He says he doesn’t like him, she says she doesn’t want to know, she has heard it all from her family before.

Danny and Baez go to see the victim of the shooting, Romano, he admits that he violated the conditions of witness protection by being there. Danny shows him a photo of Andrew and Charles, he doesn’t recognize them and he tells Danny he is done answering questions.

Erin and Anthony are speaking to Charles, with Boyle there. Charles says the gun is not his. Boyle goes outside with Erin and she tells him the gun was involved in an attempted murder.

Baez finds something, Romano’s ex-wife puts on social media that he is breaking witness protection and is back in New York, she will give his address to anyone who wants to settle a score.

Erin meets with Eddie at a bar, she asks her about her guy when pulling over Andrew and Charles. She says Andrew was mouthing off, Charles was really shocked when she pulled that gun off the back seat. Eddie asks Erin if she and Jack are a thing now, she says no. They were a great couple, she thought they were rock solid, and it wasn’t one thing that led to divorce, it was a million things. They took each other for granted, and the love left.

Garrett and Sid meet with Frank who is upset that Garrett was helping Abigail work the case last night. Garrett says protocol be damned, he is interested in being a good friend and colleague and friend to Abigail. All she is trying to do is validate herself as a detective.

Danny and Baez stop by to see Romano’s ex-wife, she says she is not involved, but she is not shedding any tears either. Baez shows her photos of Andrew and Charles, she doesn’t recognize them. Danny tells her that they are going to subpoena her DM, she tells them that one person DM her, Hayes something.

Erin, Danny, Anthony, and Boyle are in Erin’s office, Boyle says it was Andrew who did the DM to Romano’s ex-wife. Danny says he said, he said is growing.

Frank tells Abigail that they have a hit on the guy who attacked her, they would like her to identify him. Abigail looks at a lineup of six men, she says number 4. She picks the right one. Sid tells her the boss put the whole team on this, like a man on a mission. Garrett tells Abigail she could do the arrest, it is the boss’ idea.

Jamie is home, Eddie made dinner for them and got all dressed up. He says he feels like the bachelor on The Bachelor. He asks her if he missed something, maybe an anniversary. She says she is sorry for getting upset that he gave her case away. He hugs her and says thank you.

Boyle stops by to see Erin in her office, it is late and she is still working. She tells him that something doesn’t add up with this gun possession. She tells him that it turns out Charles is innocent, he tells her that is strange because Charles asked him to speak to Erin about a plea deal.

Baez does some digging, the guy that Romano walked in the day, Vito Magione, is Andrew’s father.

Andrew is in interrogation with his lawyer, Baez, and Danny, they tell him that they know what he did and why he did it. Andrew confesses, he says he shot his dad right in front of him. His dad was his world, and he watched him die in the street. Andrew says he wished he didn’t miss it.

Boyle goes to see Erin, he says he won the bet. She asks him where they are going for their romantic weekend. He says he is not holding her to it, he has never bribed a woman to spend time with him. She says she never broke a promise, he says in that case, he will pick her up tomorrow and have her back for family dinner.

Frank arrives in his office, Abigail is there and greets him. She tells him that it is now five women that have positively identified the man, it’s a strong case. He asks her if she will fill in until he finds someone, she says as long as it takes. He tells her that it may take years, she says she can handle it but she will probably need time off for the trial. He tells her that he has her covered.

At the family dinner, Erin walks in with Jack. Sean tells Jack they were told to be on their best behavior and Frank tells him that it goes for him too. Jack brings pecan pie and wine, Danny tells him he sees that he is still sucking up. Frank finds out that Erin and Jack took a trip to Pennsylvania for the weekend. Frank tells Jack that he can say grace.