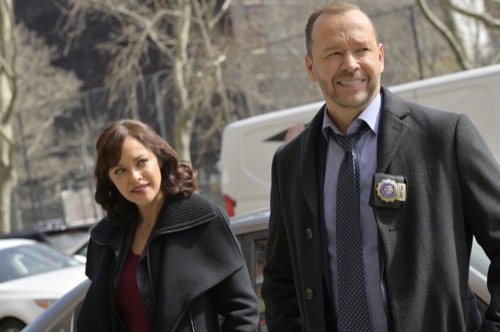 Tonight on CBS their hit drama starring Tom Selleck Blue Bloods airs an all-new Friday, April 30, 2021, episode and we have your Blue Bloods recap below. On tonight’s Blue Bloods Season 11 Episode 13 “Fallen Heroes,” as per the CBS synopsis, “Jamie faces official reprimand from Frank when he refuses to explain why he contests the arrest report of a fellow officer assaulted in the field, a rising rookie with allies in City Hall.

Also, Danny and Baez clash when their lead suspect for the murder of a legendary comedy club owner is one of Danny’s favorite standup comedians, and Eddie balks after she agrees to an undercover assignment for Anthony then learns his informant is Don Voorhees (James Le Gros), a former corrupt parole officer she and Jamie arrested.”

In tonight’s episode of Blue Bloods, Jamie is in the squad car with a rookie Hektor Vallee when they stop for coffee and Jamie tells him it is his turn to go to the train station café. Inside, the rookie is attached by a woman who is just passing through the café, he calls Jamie for help and when he gets in the rookie has her apprehended, her name is Jill and Jamie knows her, he says he got this.

Danny and Baez are on the scene of a crime, Elaine “Doc” Pressley was murdered, looks like blunt force trauma to the head and she has been dead for hours. They speak to Teddy Lavigne he found her. He tells them that she was like a mom to her, she had enemies, but she fought a lot with her son, Ira Pressley.

Frank is in his office with Sid, Abigail, and Garrett. Sid tells him that last night an ADA drew up a complaint on a homeless woman for assaulting a rookie cop named Hektor, Franks says he interned in that office. He is bruised and shook up. His partner who disagreed with the situation, who was Jamie Reagan.

Danny and Baez are with Ira Pressley who says he was scouting for club space and that is what took him 24 hours to get there. He says his mother fought with everyone. There was no money stolen from the till, so they think she knew the person that killed her. Ira asks if they spoke to Emmett Fells. These days Emmett is a drunk, the bouncer said he showed up drunk the other night and heckled people, he also went nuts and jumped the comic on the stage.

Anthony is with Eddie, a scumbag parole officer, Hobbs, is forcing some of his parolees into a sexual relationship in return for leniency. A former PO himself has come forward, Don Voorhees, Eddie knows him. Don says the guy is slime, he has a couple of favorite bars. Eddie reminds Don that he was fired, then she tells Anthony that she won’t work with this clown and she walks out. Anthony follows Eddie and tells her they have to look into this, people are getting hurt.

Jamie meets with Frank and Sid regarding the train station arrest with Hektor Valle, he claims he was assaulted. Jamie says he didn’t witness anything. Frank asks if he doubts his word. Jamie says he is a good kid. Frank says that Hektor said he knew the homeless by her first name, Jamie says he does, he has seen her on the street before. Jamie won’t budge on this one, Frank tells him to return to his command.

Jamie goes back and finds the homeless woman, he tells her that he is taking her to rehab. She tells him to leave her alone, she didn’t ask him to help her in the first place. She says she keeps getting kicked out, he tells her because she keeps using. She thanks him for what he did the other day, she says she was a good person once, she is not anymore and she can’
any more and she can’t do this, she lost this fight and nobody can help her, leave her be.

Baez and Danny are talking about the case, they are visiting Emmett, they say they are trying to gather some information about the night Doc was killed. He can’t believe she is dead, he tells them to get out of his face, they don’t have a warrant and he wants his lawyer.

Danny and Baez are back at the station, she tells him that he needs to work his magic so they can nail Emmett Fells. Baez is not sure he did it, her landlord didn’t like her, her employees, and the comics didn’t like her. Baez tells him to knock himself out.

Sid tells Frank that the homeless woman is named Jill and she was a model citizen until she fell off the grid. Abigail says they have Hektor’s bodycam footage, Jill did attack him. Valle is hurt by Jamie’s response, Abigail tells Frank he should speak to him again. Garrett tells Frank that he should call Erin, this started at complaint review.

Danny goes back to the comedy club and speaks to Ricki Blanton who Emmett Fells threw off the stage the other night. She says until the other night, he always treated her right. She says when he grabbed her, she was doing a skit on how stupid kids are. Doc threw him out, he said he was going to make her pay. Ricki went to a party after the show. Baez shows up, she asks Danny who is his new suspect. He says after speaking to Ricki it is still Emmett, but he wants to speak to the landlords first.

Eddie goes to see Voorhees and calls him a liar, he says he needs a job and needs a recommendation from someone solid because of his record. He is trying to be a good person for the first time in his life, if they land Hobbs she has to say that he changed and is someone she trusts.

Valle approaches Jamie, the two get into an argument, Executive Officer Lars Hall is there and he tells Jamie that he is suspended by direct order from the PC, he needs to give up his gun and shield.

At Sunday dinner, Frank and Jamie are clearly not fine, Danny says you could have fooled him, Eddie agrees. Eddie says they try to be honest at the table, but they don’t need to be honest about everything. Sean says he bombed a test instead of acing it. Danny says he goes off on Erin sometimes because he likes it. Eddie says the meatloaf doesn’t always agree with her. Jamie says he thought trust was a two-way street around there, Frank says he took the words right out of his mouth.

Emmett is in an interrogation room with his lawyer, Baez, and Danny, all Emmett keeps saying is no comment. Emmett says he attacked Ricki and he went back and killed Doc, some of it’s a blur, all he ever does lately is let people down. Baez tells him that he is under arrest.

Henry shows up at Jamie’s house, he tells him that he is making a mistake – it’s not about the homeless woman, it is about shutting out his family. Jamie tells him to go, another day. Jamie closes the door on him.

Frank goes to see Jill at the train station, she recognizes him as Jamie’s dad. He says one of her booking photos showed a tattoo, he is a Marine too. Jamie recognized her name since they met, and been looking out for her ever since. He tells her that she is a hero, he sees the hero that kept his son Danny alive and so does Jamie.

Baez still doesn’t think Emmett killed Doc, she thinks because he blacked out he is taking responsibility for the killing.

Hobbs shows up at a bar where Voorhees said he would be, Eddie is going undercover. She sits with Hobbs and says her boyfriend is in prison and she would do anything to help make his life easier. He grabs her cell phone and puts it in a glass of beer. Hobbs caught on, he asks who she is and grabs her arm. Just then, Anthony comes out with his gun aimed at Hobbs, he takes him away. Voorhees also ran in to help Eddie, she tells him that she will vouch for him.

Ricki confessed to Doc’s murder after they told her they checked her social media accounts and looked at the geotags on the photos she took with fans which proved she was at the comedy club after the show, which proves she was there when Doc was murdered. Emmett is set free, Danny says he will walk him out.

Frank is in his office, Abigail walks in and tells him that Jamie is there. Frank tells him that he will volunteer at the east side community center for a couple of weeks, grab a couple of guys at the precinct and have them pitch in. Jamie says he will start with Hektor, see if he can mend that fence along the way.

Frank says Hektor requested a transfer out and he granted it. Frank tells him that with every win comes a loss. Jamie says it could have been worse between them. Frank says he didn’t know that he was keeping his promise to a hero. And he expects that they both would have done the same thing.

Jamie is volunteering when Jill walks in, she says she told his dad she would do him a favor, meet him there. Danny walks in and calls Jill and the old devil dog, they hug each other. He tells her that it has been too long, the hug lasts a minute and he tells her that she still looks good. She asks him if he wants to get a coffee, he says after he walks her down to rehab and gets her squared away. She saved his life, and now he is going to help her save her life. Jamie watches and he salutes Jill.