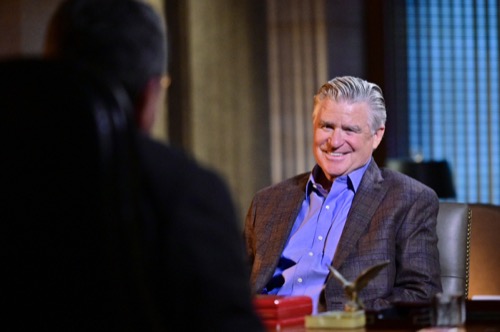 Tonight on CBS their hit drama starring Tom Selleck Blue Bloods airs an all-new Friday, October 15, 2021, episode and we have your Blue Bloods recap below. On tonight’s Blue Bloods Season 12 Episode 3 “Protective Instincts,” as per the CBS synopsis, “Frank must decide between remaining police commissioner and pursuing a new professional chapter when his old friend Lenny Ross (Treat Williams) presents him with an exciting job offer.

Also, Sean puts Jamie and Eddie in a tough position when he tries his hand at the family business behind his father Danny’s back, and Danny and Baez investigate the murder of a restaurant delivery man.”

Tonight Blue Bloods’ episode begins with Danny and Maria are on a case, a man named Ziad, took three shots to the chest and was dead before he hit the ground and fell off his bike. Apparently he got into it with someone around the block in an SUV. The victims wife and son show up at the scene, she tracked his phone because he didn’t come home.

Sean has to do a report for school, he asks Jamie if he can do a ride a long with two female cops. Jamie says let him speak to his captain.

Frank is at lunch with Lenny, he tells him that he doesn’t take bribes so if this is going there he wants nothing to do with it. He says Steve is paying for dinner, the NFL wants Frank to be the Senior Vice President of security. Frank is speechless. He asks if he would have to move. Lenny says he would work out of their headquarters in the city, he gave his life to service, and the only person he owns anything to is himself.

Danny and Maria are looking at the red light cam, it shows that the SVU followed the victim from the restaurant where he came off, they think it is a contract killing.

Danny and Maria head over to the restaurant, Punjabi Kitchen to speak to the owner about Ziad because he worked there. The owner says he was like brothers with Ziad. Danny asks about the owner’s SUV outside, it was the same color as the one who was involved in Ziad’s death. Danny wants to see the security cameras and search the vehicle.

Sean is in the cruiser with the woman, Eddie and Rachel. They got a call for domestic disturbance, Sean is excited, finally real action. Sean stays in the car and he hears on the radio about a suspect in a blue hoodie and a white ball cap and he thinks the guy just past him. Sean gets out of the car and follows the guy, but loses him when he trips over a scooter that someone left on the ground. Sean gets up and the guy he was following knocks him out by hitting him square in the jaw.

At the station, Danny asks Eddie what happened, his son is in the hospital. Apparently Sean was lying about having Danny’s permission to go in the ride a long. Eddie says the important thing is that Sean is ok. Danny is furious, Sean has a black eye and a concussion and he says they could have been having this conversation in the morgue instead of the hospital.

Frank goes to speak to Henry about the job offer, he tells him that as long as he is PC it will almost be impossible for Erin to win her bid for the DA. He asks Frank if he spoke to Erin to see what she thinks, he says no. Henry tells him to own it then.

The owner of the restaurant, Mohammad’s SUV came back clean and the security footage shows he was in the restaurant at the time of the shooting. Danny thought Mohammad was their guy because there are lots of texts between Mohammad and Ziad’s wife. Maria says they should visit Ziad’s wife, she showed up at the crime scene pretty quick.

Sean is at the station, he approaches Jamie and apologies. Sean says he did everything that anyone in the family would have done. Sean admits there was no school project, he just wanted to see what they do every day and had he told his dad, he would have said no.

Danny and Maria go to see Ziad’s wife, they start asking questions and she asks for a lawyer.

At Sunday dinner, Henry asks everyone what is going on, nobody is talking nor eating. Danny says Eddie put Sean at risk, she didn’t have his permission for him to go on a ride a long. Frank says Sean is eighteen and doesn’t need permission. Sean says it is his fault, not anyone else’s fault and he doesn’t want them at fault. Henry smiles and says that the apple doesn’t fall from the tree.

Outside the house, Erin says she loves and respects Danny. He says there are a lot of reasons why he does the things he does, Erin says leave out of the family.

At the station, Ziad’s wife, Mia, is being questioned by Danny and Maria. Danny says she knew that her husband was having an affair. She says the culture was suffocating them, she could deal with it and her husband. She tells her lawyer that she wants to confess, she killed her husband.

Frank stops by to see Erin, He tells her that he is ghosts of election future. As PC, he would be the invisible running mate on her ticket. He tells her that he has been offered a pretty good job for the NFL. She says some of her fondest memories is watching the game with him. She tells him not to put this on her, if she runs she will do it with her eyes wide opening including her families’ reputation in the city.

Mia wants to put her confession in writing. Danny shows Mia a plastic replica of the gun that shot Ziad, she confirms that yes that is the type of gun she used. Danny asks her to show them how she fired it. She picks it up and shows him. Danny tells her there is a problem, he doesn’t think she ever held a fun a day in her life, including the day of her husband’s murder.

Lenny goes back to see Frank who says he has never been to a Superbowl game. Lenny says the seven figure salary would be nice, never having to worry about money again. He asks Lenny want kind of fee he is getting for this. Frank turns down the job.

Danny knocks on Sean’s door, he asks him to go out for a couple steaks and a couple of beers.