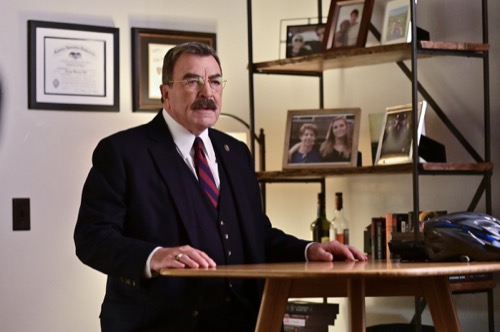 Tonight on CBS their hit drama starring Tom Selleck Blue Bloods airs an all-new Friday, November 12, 2021, episode and we have your Blue Bloods recap below. On tonight’s Blue Bloods Season 12 Episode 6 “Be Smart or Be Dead,” as per the CBS synopsis, “Frank causes family tension when he assigns Jamie to guard Danny after a hit is put on him; Frank tries to stop his grandson from seeking revenge after he’s attacked; Eddie gets a hostile new partner.”

In tonight’s Blue Bloods episode the show begins with Danny at the cemetery, he tells Linda that he misses her so much. Little does Danny know, there is a woman with a gun pointed right at him.

There is a press conference going on and a woman is dissing Erin regarding a case when she and Anthony walk by. The press sees her, and she says no comment.

Janko and another officer respond to a burglary. When they arrive, they find the owner and the burglar handcuffed to a pipe. The owner says that a good Samaritan had a gun and the handcuffs and talked the burglar into giving up. Janko wanted to know who the good Samaritan was, and the guy won’t give up the guy’s name.

Frank and Sid are walking down the hall talking about Joe getting his arm broken and a couple of ribs, Frank tells him to get a team on it and check surveillance cameras in the area. Frank pulls the curtain over and there sitting in the bed is Joe who tells him that he didn’t see the guy who did it to him. Joe says he doesn’t want the family to know and he doesn’t want it in the press.

Jamie goes to see Danny and shows him a photo of a woman who has pulled over hours ago with a gun and a silencer in her glove compartment. She was going to use it to kill a cop, Danny is the cop she was supposed to kill, she was the one at the cemetery.

Danny wants to go speak to the woman and Jamie says he is going to follow him on this one, Sid’s orders.

Sid and Abigail tell Frank that they have ID’d Joe’s attacker near a laundromat with facial recognition. The perp is Javier Estevez, 25 years old from East New York with a rap sheet like a roll of toilet paper. The arresting officer was Joe back in 2017 and he testified against him, Estevez was sentenced to four years and now he is looking for revenge.

Janko is trying to find out who owns the handcuffs from the robbery and from the serial she finds out that it was from a batch that was sold to the NYPD. So, the good Samaritan is probably an off-duty cop.

In court, Erin asks Anthony who is on the stand if there were any fingerprints on the gun, he says yes, two of them and they were a match to the defendant Sandra Harris. The defendant’s lawyer, Latisha Harris, is her daughter and she asks Anthony if the fingerprints prove that her mother killed Reggie Lewis, he says no. Anthony says he thinks Sandra did it because they found a witness who saw the whole thing.

Danny questions Alaina regarding her allegedly going to shoot him, she says shooting him in the back where is the honor in that. She says she is pregnant, there is one thing about having this type of life alone, but she didn’t want to have it for her child. She did the right thing so she can walk a straight line. It was her freedom for Danny’s life. Danny tells her that if she doesn’t help take down the guy who wanted him dead, her baby will only see the inside of a correctional facility.

Frank goes to see Joe; he looks around and sees the family photos of him and his mom. Frank tells him that the perp is someone he arrested and testified against. Joe says he will deal with this himself. Frank wants him to do this by the book, come in and identify the guy and get him to put back in. Frank tells him maybe he has to ask himself what kind of cop he wants to be. Joe says he is proactive, and he is not like him and his dad.

Danny is at home and Jamie is there camping out, he is not leaving him. Danny is annoyed that he is there and that there are two parked cars outside.

Janko goes to see Henry, she says she is returning the handcuffs, she believes they are his. She asks him why he is running around with a gun and cuffs. She asks him to promise her not to do that again. He says he has been arresting people before she was born and he is not going to have her telling her what to do, and he doesn’t want her to tell the rest of the family because it will embarrass Frank.

In court, Latisha says that Erin is trying the case only because she wasn’t Kimberly Crawford’s job and when she asks Anthony if Erin has expressed interest in the job, he says yes.

Joe goes to see Frank in his office, Frank says they are going to get the guy who hurt him with or without his consent. He will have to try to pick the guy out of a lineup and if he refuses, he will be suspended.

In court, Kimberly says that Latisha was facing Reggie Lewis when she shot him. When he hit the ground, she put the gun back in her purse, turned around, and left. Kimberly identifies Sandra Harris as the person who murdered Reggie Lewis. Latisha asks Kimberly why she finally came forward; she says because she regretted it. Latisha asks Kimberly if she ever thought Erin reopened the case because she wanted to discredit her job, she says yes.

Alaina has a wire on her, she is going undercover to get Munoz to say he ordered the hit on Danny, and then she gets her freedom for real. Alaina is given a staged photo of Danny looking shot dead so she can prove that she carried it out.

At Sunday dinner, they talk about sitting on the sidelines and Frank says it is not in the family’s DNA.

Alaina is entering a building to meet with Munoz, the team has their eyes on her, they are just outside waiting in a van in case she needs help. Inside, she pulls out her phone and shows Munoz the photo, she says she did what he wanted, she killed Danny Regan. She asks him if they are all squared up, Munoz says this will be splashed all over the news, if it is, they are square, if not, then she will be the one dead. Alaina gives the secret word that she needs to get out of there, Jamie and Danny got in with a crew of NYPD. There is a trap door that leads to a staircase, Munoz has escaped, and he has taken Alaina with him.

Danny and Jamie are able to track Alaina’s location from her cell phone. When they get there, them knocking on the door startles Munoz and Alaina hits him. When Danny comes through the door Alaina has a knife to Munoz throat and threatens to kill him, she says this way her baby will never have to meet its father. Baez asks if Munoz raped her, Alaina starts crying. Danny tells her to do him a favor and put the knife down, she does. Alaina tells Danny that if she has a son, she hopes he turns out just like him.

Joe is looking at the guys in the lineup, he is able to identify the guy. Anthony tells Joe that he is a lucky guy to count the Regan’s as his family.

Frank drops by to see Joe and tells him to thank you for identifying the guy. Joe tells him if the invitation is still there to join the family dinner, he would like to come. Frank tells him to bring the desert.

In court, the jury has reached a verdict, Sandra Harris is not guilty in the murder of Reggie Lewis, she is free to go. Kimberly tells Erin that she is sorry she lost.

Jamie has a home video to show everyone, it is a surveillance of the good Samaritan, Henry. Everyone smiles and loves seeing what Henry did, he tells Frank not to lecture him, he would do it again. Frank says be smart or be dead, that’s his pop. Frank tells Henry that he is irreplaceable.