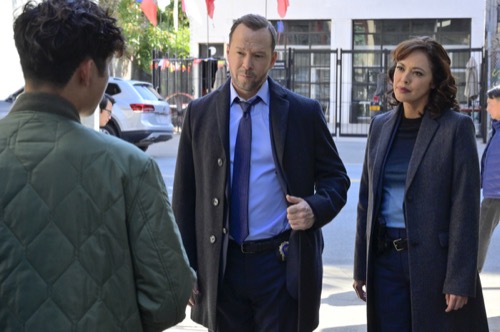 Tonight on CBS their hit drama starring Tom Selleck Blue Bloods airs an all-new Friday, November 19, 2021, episode and we have your Blue Bloods recap below. On tonight’s Blue Bloods Season 12 Episode 7 “USA Today,” as per the CBS synopsis, “Danny and Baez’s attempts to find who assaulted a shop owner are hindered by the community’s refusal to cooperate; Erin’s suspicions about her boss rise; Gormley, Garrett and Baker are threatened by a new staff member.”

Tonight Blue Blood’s episode begins with the owner of Bao’s Banh Mi sandwich shop arriving in the morning and finding that it has been ransacked. He is on his knees cleaning things up when someone comes from behind and hits him on the head with a bottle.

Erin is given a small case that is under her office’s pay grade and she is not happy about. She shows the file to Anthony and he can’t believe it, it small potatoes drug possession case. She asks him to look into it, he tells her she was given the case and she tells him it is his fault.

Danny and Baez are on the scene of the sandwich shop, the owner is alive after the blow to the head. Mr. Bao says he came in alone and didn’t see who hit him. He was tired last night and never made the bank to make the night deposit, he lost a lot of money; twenty thousand dollars. Danny and Baez leave the shop and try to ask people questions in the neighborhood and everyone says they don’t speak English.

A young guy see Danny and Baez and tells them that people won’t talk to them because they are afraid of pay back, retaliation. If you don’t pay for protection, you will need protection and Bao didn’t want to pay for protection, he is old school and stuborn. Born in USA is the name of the gang and it is run by a man named Sonny.

An office named Reddick wants to work for Frank and she is sitting at a boardroom table with him and his team, he asks her why there. Frank tells her the people on the 14th floor were invited there because of what they did out there. She is asking for the opportunity to prove what she can do with them as partners and the commissioner as CO. She says she has no agenda other than to be useful. Frank tells her that he doesn’t think she would be a good fit up there, but he would be happy to place her anywhere else. She thanks him for the consideration and honestly. Frank is surprised that she didn’t crumble. He then tells her that her new command will be PCO.

Erin goes to see Jamie and Eddie, she thinks somebody told Crawford that she was going to run against her and that is why she is giving her fluff cases.

Danny gets Sonny, brings him into the station and Danny asks him if he thinks he is the only creep that makes business owners to pay him to protect him from beating them. Sonny says he didn’t not rob Bao because he makes the best food – he is off limits.

The team is in Frank’s office, Reddick joins them now that she is part of the team. Garrett and Sidney are not happy about the addition.

Danny and Baez are chatting outside and having a sandwhich when a man is thrown out of a van with a hood over his head, it is the man who owns Bao’s building, a gift from Sonny, he is sending a message to Danny that this is the man responsible for hitting Bao and ransacking the place, this is why there was no forced entry, he has a key to the place. His lawyer walks in and tells Danny he has an alibi for the time of the robbery.

In Frank’s office, Reddick and Sid come head to head on a case. In the end, Frank tells Reddick she did good work, he somewhat sides with her, he tells Sid this case made him remember why they are all up there. Frank then gives Reddick papers, it is an open transfer, she can choose the bureau.

Erin goes to Danny’s office, she asks him about the case she is working on. He says he will look into it. Danny and Baez return to Bao’s shop, Bao and his wife start arguing and little do they know, Danny is recording everything. Outside the shop Danny passes it through a translation app and Bao’s wife is telling him to tell Danny who did it, he knows who did it.

Danny puts two and two together, he figures out that the kid on the street that gave him the information is Bao’s son and he has gambling debts. He robbed his own father to pay them off.

Danny goes to see Sonny, and he tells him that he doesn’t have to build his business in the street, he could work with him.

Erin asks Anthony what is wrong with her, she is always assuming the worst. The DA put her on the case because she is the best and she thought she did it to put her in her place. She says Crawford knows she doesn’t like her yet she regards her highly and respects her.

At Sunday dinner, Erin says she is not running for the DA job, it is not right for her right now. Frank says some time a no is what you need before you jump in with two feet.