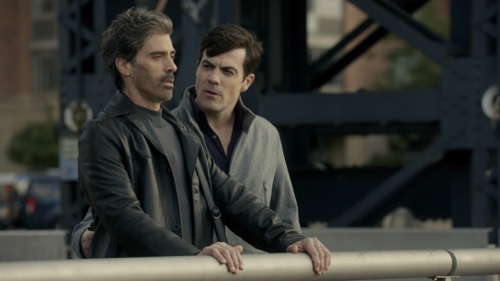 Tonight on CBS their hit drama starring Tom Selleck Blue Bloods airs an all-new Friday, December 3, 2021, episode and we have your Blue Bloods recap below. On tonight’s Blue Bloods Season 12 Episode 8 “Reality Check,” as per the CBS synopsis, “Danny partners with Anthony to solve a double homicide when Anthony’s shady cousin, Joey (Anthony DeSando), proves to have gang ties to the crime.

Also, the boundary between Eddie and Jamie’s work and personal relationship is strained when Eddie and her new partner, Badillo (Ian Quinlan), ask Jamie to reassign them to different partners, and Erin questions the sacrifices she’s made for her career when she allows her law school friend to dig into her personal life to prepare for a potential run for district attorney.”

The city of New York was held together by politics. Everyone knew this and Erin was thinking of stepping into the fray. She was considering running for District Attorney. She talked to her old friend Lisa whose run many a successful campaign and she even helped elect the new mayor. Lisa knows what she’s doing. She also knows Erin. They met in law school and have been friends ever since. Lisa therefore ran some soft polling on the possibility of Erin becoming the next DA. She later met up with Erin and she said what she’s heard has been good so far. Erin is a known figure. She’s a Reagan. Her father is the Police Commissioner. He also just went on the record disavowing a group of former cops advocating for extremism in handling protestors and now that group is coming after him along with several cop groups that call him a “traitor”.

Frank was learning to handle that with his team. He was warned not to make a comment and he did so anyways because he hated people using his image and videos of him taken out of context to fit their own agent. But Frank was facing pushback. He needed to fight back against it and his team was figuring out his correct response while Erin was considering her political run. Erin and her friend Lisa talked about any skeletons in the closet. Erin didn’t have any and she didn’t have any because she didn’t have a life. Erin is a beautiful woman. She lives alone. She doesn’t date. She was a blank canvas and that could be a problem. No one was going to believe that Erin doesn’t date. They were going to suspect she was hiding something.

The most time she spent with a man has either been family or Anthony. Anthony is one of her best friends. He’s also a co-worker and nothing romantically has ever happened between them. Anthony also couldn’t be her sounding board on her possible run because he had teamed up with another Reagan to help his stupid cousin Joey. Joey was supposed to be laundering money for the Double Treys and he lost their investment with a risky move into cryptocurrency. The ruthless gang was going to want him dead for losing their money. Joey turned to Anthony for help and Anthony roped in Danny. The two men were going to help bring down the assassin before Anthony’s cousin could be killed.
There was just one problem with saving Joey’s life. It was Joey himself. Joey was a sleezebag. He had apparently stole from their dead grandmother right after she passed and Anthony found out about it while Joey was wearing a wire to get a name from one of his friends. Anthony didn’t know about Erin’s situation until he returned to the office and she pulled him for help. Erin found out something about herself. She found out that she doesn’t have a life outside of work. Erin has been catching up with old friends and they’ve all told her the same thing. She let their friendships fall by the wayside to focus on her career. Its what caused the end of her marriage. Her own daughter even noticed it and told her about it.

Erin then asked Anthony. She asked him if they didn’t work together would they see each other after work or hang out? Anthony said “probably not”. Anthony mentioned Danny that Erin was considering running for DA and Danny later brought it up at family dinner. They asked Erin about it. She downplayed it and they noticed she hasn’t been herself. She hasn’t been herself since she found out she doesn’t have a life. Erin put everything into work and what does she have to show for it? Erin lost great friends. She lost her marriage. She also noticed that she wasn’t the only one in the family that keeps to themselves and so she brought that up at dinner. Henry was dating someone new. The family teased him about it and they even joked his new girlfriend might come around.

Erin didn’t think that would happen. The only people at the dinner table was family or married in. Erin’s friend Lisa also called her in for another meeting. She found out that Erin was in a tailspin and so she returned her retainer because she didn’t think Erin was ready. Erin even felt like she was no longer ready. Erin was feeling down on herself when Anthony stopped by to cheer her up. Anthony and Danny arrested the men who were trying to kill his cousin. The cousin gets to start over. Anthony was now free of any family responsibility and he could be the friend that Erin needed him to be. The two went out. They went to a karaoke bar and had fun. Frank in the meantime had gotten the Patrons Of Police to stop using his imagery to fit their agenda.

All he had to do was threaten to release information about the former detective running the group. Frank handled things his way and Erin handled things entirely different.

But Jamie finally filled in Eddie about her partner. Her new partner Badillo didn’t want a new partner because his past partner had been killed right in front him and he hasn’t been the same since. And so Eddie decided to talk about his previous partner with him and it helped create an understanding.