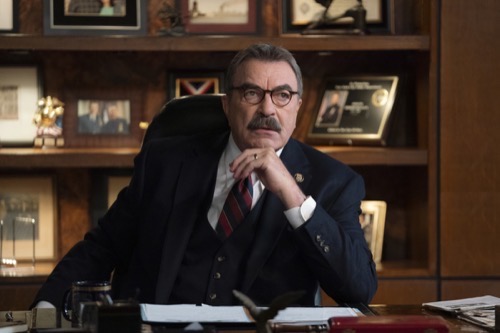 Tonight on CBS their hit drama starring Tom Selleck Blue Bloods airs an all-new Friday, January 8, 2021, episode and we have your Blue Bloods recap below. On tonight’s Blue Bloods Season 11 Episode 4 “Redemption,” as per the CBS synopsis,“Erin is conflicted by the weight of her authority in the sentencing of a man who is guilty of vehicular homicide; Danny and Baez pursue a rideshare rapist; Jamie and Eddie team up to aid a fellow officer when his partner is shot on the job.”

Erin is in court, she says Richard Farmer had dinner and drinks at a local restaurant, then got behind a wheel of a car, then struck and killed Veronica Brooks. His blood alcohol was above the legal limit and she is asking for justice. Meanwhile, Danny is speaking to Kirsten, she says a couple of friends and she went dancing. When she was ready to leave she texted for a car, she went outside to the car, got inside.

She noticed she was in a neighborhood she didn’t recognize, and then she was in the backseat with her and his face was covered with a mask. He tried to pull off her dress, that is when she opened the car door and ran. She found two officers and reported it to them. At the same time, Janko and her partner respond to a 10-13, an officer being shot.

Frank holds a press conference, he awards detective Allison Mulaney, who is in a wheelchair after being wounded in the line of duty, with the Police Combat Cross. He says the city is deeply grateful for her service and wishes her all the best in her retirement, the NYPD is there for her. She says for as long as she remembers she wanted to be a cop, and she wants to continue doing her job.

Veronica Brooks’ mother visits Erin in her office, she wants Mr. Farmer sentenced to fit the crime. He killed her little girl and tells Erin that she knows she will do the right thing.

Baez contacts the rideshare company, when they arrived Kirsten wasn’t there, someone else tagged in and took that pickup. Danny gets a call, video surveillance shows that a black car picked up Kirsten, the owner is Denis Strand and Danny goes to pick him up, tells Baez to go get Kirsten and see if she picked him out of a line-up.

Frank goes to see Allison in the gym, he tells her that she took him by surprise at the press conference. He says they have never had a detective work an active crime scene from a wheelchair. She reminds him that they did have a mayor who ran a city in a wheelchair. She is asking for a chance to prove that she can do it. Frank gets up and leaves.

Danny has found Denis Strand, he asks him where he was last night; he says delivering prescriptions. Danny says his car was spotted in a certain part of a city near a nightclub where a lady was picked up and the guy tried to rape her. Denis says he knows nothing about that. Danny asks him to go to the station to stand in a lineup, he says yes.

Anthony is on the scene of a school playground when Erin joins him. A man is there a he is threatening the children. Erin has a surprise, Richard Farmer is there as well, he lives in the neighborhood and that is why Anthony called her. Other police are there, Farmer jumps the man and gets stabbed in the scuffle, but police are able to grab the attacker’s knife. Farmer asks if the kids are ok, Erin says yes, because of him. Anthony tells him that he did good.

Jamie and Eddie are called to the scene where a man has been killed, a single gun shot to the back of the head, and he was carrying Gordon’s gun, he was the officer that was shot. All of a sudden, Gordon’s partner, Flores shows up and when Jamie and Eddie ask him why he is there, he says he wanted to make sure the guy who shot Gordon got what was coming to him.

Frank is in his office with Abigail, Garrett and Sid. Abigail is for it, so is Garrett. But Sid and Frank are against it. Frank says he thinks she is after one thing, keep her job, which is honorable yet impossible. Garrett says it is a classic underdog story.

Erin and Anthony are talking, he thinks Farmer jumped the guy to look good. Erin got letters from the parents children begging her for lienency. The question is, should a man be judges for his best day, or his worst. Anthony says he shouldn’t get a pass for his bad day.

Kirsten is with Baez and Danny, the men are in the lineup. Kirsten can’t be sure, she gets really stressed out about it and Baez tells her it is ok. Danny tells Baez to get a warrant to search the guy’s car, maybe find DNA to link him to Kirsten and it will buy him time to speak to the scumbag.

Jamie is worried that Flores is the one who shot the guy, Eddie says the guy had It coming.

Danny is with Denis Strand, he tells him that he is smart enough to know that he wouldn’t be questioning him if he was picked out of that lineup. And he is willing to bet that they came up empty when they checked his car. Danny says he is a freak, and he is used to dealing with freaks like him. Danny leaves the room, Baez got a call from the DA office, they have to either charge Strand or cut him loose. Danny asks for another hour, he is frustrated, he certain that Strand did it.

Jamie finds out that Flores is suspended and will probably be charged with murder.

At the hospital, Jamie finds Flores with Gordon, he is in a coma and he won’t wake up. Flores takes the blame, Jamie tells him that it is not his fault. Then Jamie asks him to look him in the eye and tell him he killed that man, Flores says he has to get back to his partner.

Frank is with Allison, he says he is on her side. He got a call from chief Ellison, a spot just opened in his command. There is room for advancement and her work will impact every detective in this department. She thanks him, and passes on the offer. She is a squad detective, and wants to continue being one. He tells her that it is the only opportunity that he has for her. She has spoken to a lawyer, he tells her that is her right, but he has a responsibility to keep everyone safe. He says he is not the enemy but he has a job to do.

Danny put a GPS on Strand’s car, nobody is going to know about it, they are going to catch him red handed with a decoy, a female officer. She asks if he has anyone in mind, he smiles.

Erin is in church, Frank joins her in the pew. He tells her that Richard Farmer is a tough call. She asks how someone can be a killer and a hero at the same time. Frank tells her that God doesn’t expect her to be perfect. He tells her to speak to the people whose lives she is going to change.

Time for the family dinner, Lisa broke up with Sean, she accused him of flirting with another girl. The whole family starts talking about it. They all start teasing each other about past relationships.

Baez is undercover, Strand is pulling up to pick her up. It is a different man in the drivers seat, his name is Leo and Strand lets him use his car sometimes. Baez calls Danny and tells him they have a problem. They bring Leo into the station and head back out to find Strand.

Strand is at it again, he has a woman in his car and he has her mouth covered with duct tape. Danny and Baez find him and break it up before he hurts the girl. Danny handcuffs him and calls him a scumbag.

Erin calls in Veronica Brooks’ mother to speak to her about Farmer. Erin asks her for guidance. She says when she found out what Farmer did, she thought about those parents and how grateful they must be that their children are alive, but her child is not, and he has to pay for that. Erin asks how much does he have to pay for that, and she is leaving the decision up to her.

Jamie and Eddie visit Flores at the hospital, Gordon has regained consciousness. Jamie tells Flores that he wasn’t there when Gordon was shot. He says they were on patrol, he wanted a pack of gum, that is when he heard the shot. He should have been with him. Jamie says he didn’t do anything wrong, and he didn’t kill the guy who shot Gordon, because he is a good cop. Flores thanks him.

Abigail comes into Frank’s office, there is a problem.

Erin sits down with Farmer, and tells him that a lesser sentence may be appropriate. Farmer says no, there is no excuse for what he did. One stupid decision and he ruined that girl’s life and her families; he is suggesting that she go for the maximum sentence. Mrs. Brooks walks in, she says the only thing that has got her through is, is his rotting in jail. Her daughter believed in finding the good in people, in second chances. Farmer thanks her. Erin says maybe they can all put their heads together and find a recommendation that they can all live with.

Frank shows up at the hospital to see Allison, he says she went undercover and her squad knew nothing about it. She admits it, she says she found out that the scumbag that put her in that chair got sent upstate. She found him, he made her as soon as he saw her, shot and knicked her in the wrist. She knee capped him with the baton and hit him in the mouth on the way down.

She sasy she is not looking for pity or a handout of a desk job. She wants to stay where she is not wanted, she is not going to sue the department. She has applications out, he asks her how he can help, he has this great detective but she is in a wheelchair. He asks what if she had to have a third detective with her in the field, had to make weekly reports about her progress. He tells her that she is going to be the first, make it work. Then he tells her nice work.