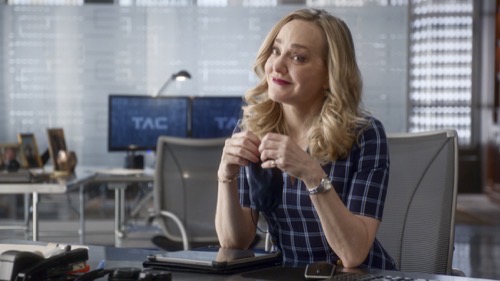 Tonight on CBS their drama Bull inspired by Dr. Phil McGraw airs with an all-new January 25, 2021, episode and we have your Bull recap below.  On tonight’s Bull season 5 episode 7 called, “The Head Of The Goat,” as per the CBS synopsis, “Bull and Benny mount a difficult federal trial defense for a young mother accused of aiding and abetting her extremist husband in an act of domestic terrorism. When the controversial case makes news, Benny’s commitment to TAC complicates his burgeoning political career.”

A car bomb tore through a family car. ATF Special Agent Jackson Miller was killed. He died alongside his two sons and the Federal Bureau of Investigations were in charge of investigating the murders. Someone set up the car bomb. The make and model led the FBI back to Adam Doherty. Doherty had a family of his own and that family was taken into custody as well. His son Max was separated from his wife.

His wife Alicia was forced to answer questions about Adam and she was never told her husband was dead. She therefore lied about her husband to the FBI because she had been scared of Adam’s reaction to her words. Adam was abusive towards his family and they lived in fear of him. Alicia was so scared of how he’d react that she got herself in trouble with the FBI. And now they were trying her for being a part of the plot to murder Miller.

Alicia was in so much trouble she reached out to Bull’s team. She wanted their help in defending herself and she hopes they’ll reunite her with her son. Max was placed in foster care. He was going to spend the rest of his life with strangers if Alicia wasn’t freed. She needed all the help she could get and both Bull and Benny agreed to be there for her. Benny even agreed to take on this case in spite of how it looks.

He was running for District Attorney and his campaign team didn’t believe he should take the case. They said he wouldn’t receive from the Prosecutor’s Office for helping a terrorist. This is what Alicia is being accused of. The AUSA was trying her for terrorism and nothing Alicia said or did in the past few weeks made her look good.

Benny told his campaign that he was choosing to believe innocent until proven guilty. He wasn’t sure if Alicia committed an act of terrorism and he was defending her because everyone in such a position deserves fair representation. Benny told his campaign to make peace with that. He continued to be Alicia’s lawyer and he tried to defend in spite of overwhelming evidence. She did lie to the FBI.

She claimed her husband didn’t have any hardcore beliefs and he was a conspiracy theorist. There were a bunch of evidence proving that Adam was a crazy person who thought an act against Miller was him standing up for what’s a right. Adam even died believing he was in the right and so everything Alicia said about him had been a lie.

He wasn’t a good man. He was event a decent one. Adam Doherty was a monster and the jury believed Alicia was a monster too. The AUSA showed a video of the couple with their son doing surveillance of Miller’s home. The family had to travel two hours to get to that park. It just didn’t make sense that Alicia didn’t know something was happening when her husband dragged her to such a place and so that raised questions.

Miller’s widow going on the stand also made Alicia look bad. The widow lost her whole family and she was a sympathetic figure. She told the court how her husband planned on taking their kids on a boys’ trip to give her a break. She even felt relieved when they left and boy is beating herself up now that they’re dead.

The AUSA made a strong case. Benny had a hard time making Alicia look good and his own sister doubted he could win. Isabel was a part of Benny’s campaign. She was acting a financial adviser and she told Bull when it was just the two of them that Benny was never going to be the District Attorney. She thought her brother would drop out after this case was resolved.

Isabel told Bull because she figured he would be happy and he wouldn’t necessarily be happy if Benny was forced to drop out of the race. Bull and Benny are friends. Bull wants Benny to be happy and he also doesn’t want to lose this case. He, Benny and Chunk wanted to put Alicia on the stand. They tested her out and she admitted to them that some part of her did think Adam might be involved with the bombing.

Alicia also said she wasn’t sure. She told them that everything happened so fast and so her legal team didn’t think it was wise to put her on the stand, but they did question how the FBI knew so fast that Adam was responsible. Benny didn’t put Alicia on the stand. He instead asked that a FBI Agent come in for questioning and he asked this agent about the Righteous Crusaders.

The Righteous Crusaders were a terrorist group who believed America should return to the days of militias. Adam was a part of this group. He was therefore monitored by the FBI who followed him and his family waiting for Adam to break the law. And so Adam murdering the Millers was on the FBI, they also must have evidence that Alicia had nothing to do with the bombing.

None of the surveillance carried out on Alicia could prove she had anything to do with the bombing. She never went to the storage locker where the bombs were made and she picked up the pieces when she was doing the shopping for the household. She had nothing to do with the bombs. She wasn’t a zealot like her husband and Benny got the FBI Agent to say all of that in open court. And that’s why the jury found Alicia not guilty.

Seated in the courtroom was a journalist that Isabel invited and his paper was now going to endorse Benny for District Attorney.