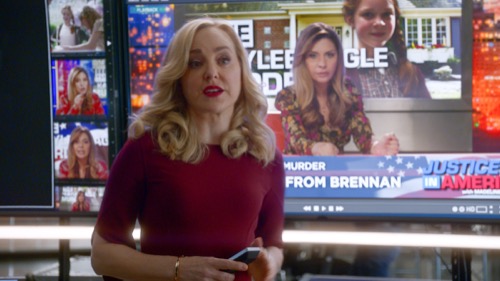 Tonight on CBS their drama Bull inspired by Dr. Phil McGraw airs with an all-new February 22, 2021, episode and we have your Bull recap below.  On tonight’s Bull season 5 episode 9 called, “The Bad Client,” as per the CBS synopsis, “Bull uses the First Amendment’s freedom of speech to defend a controversial news commentator blamed for a man’s suicide after she accused him on-air of murder.”

In tonight’s Bull episode Madeline McBride was a tough client. Bull and his team have represented people they thought were tough and still, none of those people held a candle to Madeline. Madeline was a television personality. She has a legal tv show in which she discusses the latest case in the news and so she talked about Kaylee Nagle. Kaylee Nagle was a preteen girl found raped and murdered in her home.

Madeline believes it was Kaylee’s stepfather Jeremy Brennan who was responsible for the girl’s death. Brennan was home alone with Kaylee because her mother was at work and he claims that he left the house to take a bike ride. He said by the time he returned he found Kaylee dead in the kitchen. There was also DNA under Kaylee’s fingernails and that DNA didn’t match Brennan. Only Madeline never mentioned it on her tv show.

It went against her theory. Madeline let everyone and their mother know that she suspected Brennan of murdering his stepdaughter. She even told her viewers to harass this man. They targeted them online and they accused him of being a pedophile who murdered his stepdaughter. Madeline managed to whip up her base in such a frenzy that Brennan couldn’t go outside. Brennan and his wife sued Madeline.

They sued her for targeted harassment and Benny acting as Madeline’s lawyer claimed that everything she said on her show was protected by freedom of speech. Benny didn’t mind supporting the first amendment. His problem with Madeline was that she genuinely believes she has a connection to Kaylee’s spirit and that she was getting justice for her.

Things were made worse when Brennan later committed suicide. He killed himself after watching Madeline’s show and, in that episode, Madeline continued to harass him. She told his viewers that he was a despicable man. She claimed that Brennan should be in jail and that’s the last thing he heard before he went into his garage and turned on his car. Brennan is dead and the case against Madeline was made that much stronger.

It didn’t help that Madeline was so unlikable. People watch her show to hate-watch and two out of three tend to believe she was a hateful character. This didn’t mean anything good when it came to jury selection. Bull said they had to treat Madeline as if she was the hunchback of Notre Dame. She was hard to look at, but they eventually had to prove she has a heart and so the problem the team had was that they weren’t sure she does have a heart.

Madeline was a cold person. She sat in the courtroom everyday hearing testimony about how she harassed Brennan into killing himself and none of it fazed her. She didn’t care that Brennan was dead. She still believes he killed his stepdaughter and so even hearing from his widow didn’t upset her. Madeline just thought the widow was looking for someone to blame because she brought a monster into her house.

Madeline was a dislikable person because she didn’t care about what she caused. She just lived for the drama of it all. Madeline continued to vilify Brennan despite his death and so Bull and his team had a tough time hiding her personality from the jury. And to that end, Benny did his amazing stuff like always.

Benny asked the psychiatrist on the stand if Madeline ever forced Brennan to go on social media. Did she force him to watch her show? Did she make Brennan do anything he did? The answer was “no” and so she couldn’t be held responsible for what he did on his own. Brennan was an adult man. While it was easy to blame his suicide on Madeline, she hadn’t forced him to go into the garage.

Madeline just accused him of being a murderer and her fans or Brennan did the rest. She also wasn’t always like this. Madeline went on the stand and she talked about how she lost her son in a crowd one day. Her son had been three at the time. He disappeared while she was doing her Christmas shopping and Madeline tried to find him. She used every means possible.

Madeline went to the media. She made sure that his face was on the news every day every hour and she didn’t stop even after they found her son’s body. She continued to turn to the media to find her son’s killer. She made a name for herself in hunting killers. She said on the stand that she has to speak for the dead because no one else will and that’s what she was trying to do for Kaylee.

It wasn’t long after her testimony that Madeline found out her network was dropping her. The network decided to drop her after a man was arrested for Kaylee’s murder. It turns out her stepfather really didn’t kill her and that Madeline had gotten wrong. The real killer was found after his girlfriend tipped off the police. The girlfriend was a fan of Madeline’s and she collected his DNA because of what she saw on Madeline’s show.

Madeline’s show, therefore, led to the police finding the real killer. Bull and his team brought that up in court and so it helped Madeline’s case. She had been wrong about Brennan. Only her show didn’t stop the girlfriend from picking up the phone and calling the police. Benny made a strong case in defending Madeline and unfortunately, it wasn’t enough this time. The jury found her liable and she now has to pay Kaylee’s mother (a woman who lost her whole family) two and a half million.

Not that Madeline minded losing the case. She said the trial had been great publicity and it will help her cut a new television deal.

Dani hadn’t helped much with this case because her father died and she hasn’t seen or heard from him in years, but it turns out he was living down the street from her and he was keeping watch over her because he didn’t know how to tell her that leaving her was the worst decision he ever made.