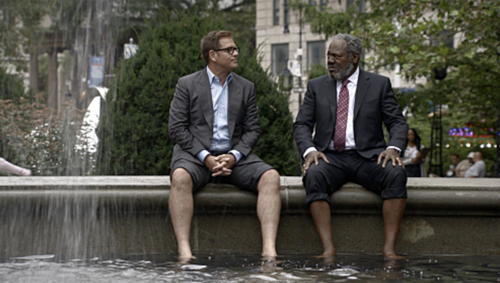 Tonight on CBS their drama Bull inspired by Dr. Phil McGraw airs with an all-new November 4, 2021, episode and we have your Bull recap below. On tonight’s Bull season 6 episode 5 called, “King Bull,” as per the CBS synopsis, “The team asks Bull to step aside when they fear his recent issues could negatively affect their defense of a business mogul accused of being mentally unfit to lead his company.”

In tonight’s Bull episode, Bull is under arrest. He was arrested for jury tampering. It was a federal crime and the feds were the ones to arrest Bull. He was in court next to Lee Donaldson. Donaldson was the CEO of the 20 Minute Oil & Lube Company. He began the company. He created the tagline “we’ll keep you fluid”. He was under arrest because after dancing naked in a fountain he went on to steal a mail trunk and that was a federal crime.

But both were released. They were out on bail and them being up on the docket right after each other meant their lawyers talked. Their lawyers knew each other. Chunk knew Donaldson’s daughter from his early days in the profession and so he agreed when she asked him to take her father’s case.

Donaldson’s daughter was a new lawyer. She couldn’t defend his wrongful termination suit against her elder sisters in the company and so she asked Chunk to do it. She was even willing to hire TAC. She just wasn’t willing to hire Bull. Bull’s current legal trouble has people doubting him and they’ll doubt any case he’s on and that meant no one wanted him on their case. Not even their other clients.

Chunk told Bull to take a step back. Marissa and Taylor agreed. Bull said he would take a sabbatical and then he dropped the hammer on Chunk. Bull told Chunk that he doesn’t want him as his lawyer. He said that it was too tied to the case he was being accused of favoring and so he wanted an outside lawyer.

g and so while they believe him when he said he was innocent – they both wanted their new case with Donaldson to go well. They didn’t want to fail without Bull. They wanted to show they could still be successful and that’s why Marissa followed Chunk to court. She was in his ear in person instead of through an earpiece. They picked the perfect jury together. They also thought they had everything handled and the one outlier was Donaldson.

No one could handle Donaldson. Donaldson snapped at the doctor who checked for mental ability and he later said that he did it because the doctor asked him if he was a bad father. Donaldson didn’t have a lot of time when he was building his company. He left the older two daughters more to his wife and he was different with this third daughter.

He took personal time for his youngest child. Kiera has always believed her sisters resented her for that fact and that’s why they were trying to take out on their dad. But the doctor implying he wasn’t a good father was a trigger. Donaldson hated that implication and he was a hothead. He said, “you can take a kid out of the Bronx but you can’t take the Bronx out of the kid”.

Donaldson was a troublesome client. He didn’t tell his lawyer or even his daughter that his two million dollars for the research and development department were in fact spent on a shaman. The shaman was for himself. Donaldson was afraid of looking weird if he kept out and hired the man himself. He, therefore, had a friend at the company do it under the guise of it being a work thing. Only it came out in court. It made some of the jurors question him. Chunk and Marissa were often on the back foot because of their client and they didn’t know how to turn it around. They needed Bull. They didn’t want to come out and say they needed Bull, but they needed him and no one would say it.

Taylor found evidence of one sister lying to the other. She found out that Gemma ousted her father because she was having an affair with the CEO of a rival company and that same company tried to buy Donaldson’s company a few months ago. Donaldson turned out the offer and so Gemma was trying to oust her father so that she could sell the company. She just didn’t tell her sister Ruby. Ruby helped Gemma oust their father because she thought they would run the company together and now she knows differently. She confronted her sister in open court. Her sister tried to lie and Ruby noticed she was doing her tell and so she knew her sister was lying. The two women turned on in each other in open court and Donaldson shouted that he didn’t want this. He didn’t want his family turning on each other.

Donaldson stormed out of court. Chunk made his excuses to the judge and the judge allowed for a continuance if and only if Donaldson came back to court. But he stormed off. No one knew where he went and so it’s a good thing Bull called to check on the case. He found out what was happening. He went to see Donaldson. He knew where to find him because they talked when they were detained together. Bull reached out to Donaldson. He counseled him. He convinced Donaldson to return to court and he gave Chunk one question to ask Donaldson on the stand. Chunk later asked. Chunk asked Donaldson which daughter he loved the most and Donaldson said freely he loves all three of them the same.

Donaldson has purposely been devaluing the company. He did so because the buyout offer from the other company had already started to make the sisters fight and argue and Donaldson didn’t want that. He was trying to go bankrupt because only then would the sisters realize they love each other more than the company. Donaldson later agreed to step down as long as all three sisters agreed to run the company together. They also couldn’t sell before ten years and that won’t be a problem. Hearing their father say how much he loved them and all the things he was willing to do to prove it – the sisters let out of their petty grievances and vowed to try again with each other.

Bull came through for the team. He helped win the case and he found a lawyer. He did as his wife suggested and he hired a lawyer that beat him in court.