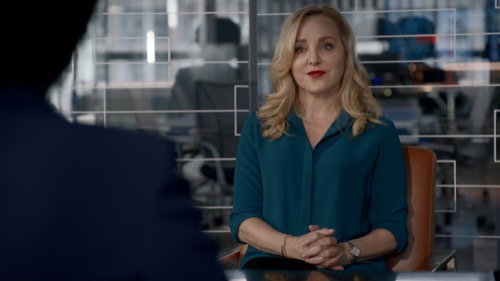 Tonight on CBS their drama Bull inspired by Dr. Phil McGraw airs with an all-new November 11, 2021, episode and we have your Bull recap below. On tonight’s Bull season 6 episode 6 called, “Better Angels,” as per the CBS synopsis, “Bull has just two days to prepare a defense for a midwife accused of practicing without a license; the team tries to convince the private religious community of women their client helps to serve as character witnesses..”

This particular order doesn’t go to the hospital or see traditional doctors. They would have no one if Maggie didn’t help them with childbirth and so why didn’t she get licensed in New York? She would need a Masters’ degree. She would have to go to school three hours away and spend thirty thousand dollars that she doesn’t have in order to become licensed in the state. And so she needed someone to take her case pro bono and she wanted that to be Bull.

Maggie’s case was moved to Manhattan. The district attorney thought she would get too lenient of a jury upstate and so they moved her case to a jury pool she has no history with. Maggie has been told by lawyers that she should take a plea deal. She doesn’t want one and believes she could fight the charges. There was just one problem with Maggie and that’s her temper.

She couldn’t even handle Chunk in front of a mock jury and she took calls from clients. She violated the state of her parole by doing so. Something that was known to Chunk and so he thought they should take a plea. They got the case at the last minute. They only had three days to prepare for it and Chunk didn’t want a loss. He couldn’t handle the embarrassment.

If Bull gets sent away, it was everyone else who suffered. They would all be out on the streets and Chunk didn’t want the last two lines on his resume to be a case affected by a bribery charge or one he lost. But Bull ignored him. Bull has been doing that a lot lately because he hasn’t been the same since his daughter was kidnapped and he’s snapped or gotten upset or blown up at everyone. Chunk eventually barked back.

He tried to get a plea agreement with the District Attorney of Maggie’s county and Bull sunk it and so Chunk barked back. He yelled at Bull. He told him that he took this case because he wants to interfere in his own case so badly that the loss of control has made him overreact.

Bull’s new lawyer was questioning his team during the weekend. Olivia got them to admit that Taylor had doubts about Bull and she told Taylor. Taylor then turned on Marissa. The two were fighting so badly that it scared off the Mennonites they were supposed to talk to. They couldn’t find anyone to come down to the city to testify for Maggie. The tension was too much for everyone and Olivia’s interrogation wasn’t helping anyone.

She stirred up a lot of things. Chunk only barked back because Olivia made him realize that his career as a lawyer could be at risk if he didn’t think of a Plan B and Marissa was even thinking of leaving. She received a job offer. She didn’t turn it down right away because she told them that she would think about it.

Marissa and Taylor later talked. They admitted they both believe Bull was innocent of the bribery charge. They just didn’t know why he went to the juror’s house that night and so that’s where the doubts come in. Taylor hadn’t wanted to share that with anyone else. She shared it with Marissa because they’re best friends and so both of them admitted they still didn’t know why Bull did what he did.

He said he wanted to spy on the juror to get a feel of him. This was typically Danny’s job and she wasn’t there to do it because she was out of town taking care of a sick parent and so Bull did it himself. He didn’t tell anyone he was going to do it. He just did it and his reasons seemed chaotic. He could have brought down the whole team with his actions and he didn’t even realize it until Olivia pointed it out.

Olivia was a great lawyer. But she was toxic to work environments. She even made Bull doubt himself and Bull got his affairs in order for his wife in case he went to prison. Bull’s team managed to find one pregnant woman willing to testify in Maggie’s defense. Only the woman couldn’t discuss intimate matters in front of men because she was widowed and lived with her father who was old school.

Bull heard this and he arranged for the district attorney to hear the woman’s testimony. It detailed Maggie traveling through a blizzard to get to a pregnant woman who went into labor five weeks early and whose was breech as well as had a cord around his neck. Maggie managed to save the child’s life. It was a great midwife, but she’s delivered her last baby and the district attorney was sure about that.

She was willing to give Maggie probation as long as she doesn’t deliver any more children without a license. Maggie agreed to it after Bull pointed out that she could help the community get other midwives to that area and so Maggie was going to retire. Bull’s people also chose not to quit.

They all believe he was innocent of the bribery charge and that meant whoever did arrange it had gone a long way to ruining Bull. Someone must really hate him if they tried to ruin his good name, his company, and even send him to prison. And so Olivia was going to try this case in order to get justice.