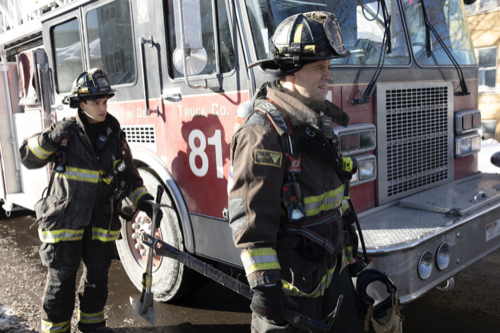 In tonight’s Chicago Fire episode, Herrmann is going on vacation; Grainger is taking over for him and Casey is not happy when he sees Brett flirting with him. The alarm goes off, the squad answers a call for a house fire. Grainger starts taking orders, Casey tells him to pull back, he gives the orders. Inside the house, the fire is raging, the squad starts checking the rooms when they see a woman in the kitchen, and she catches fire.

She is alive, but she is severely burned. In one of the bedrooms, is a young man, Severide tells him that he is going to get him out of there, his name is Dylan. Severide opens the window, he tells Dylan he lived there as a kid and there is a drainpipe, just put his foot on it and climb down to the bottom. Dylan gets out and to safety. It is Severide’s turn next, he is also safe on the ground.

The woman is outside on a stretcher, Dylan sees her and starts to freak out. Brett says they are taking her to the hospital and tells Dylan that he can go with them.

Back at the station, Casey tells chief Boden that the woman was trying to get to the fridge, possibly for drugs.

Cruz tells Mouch that should offer a few more menu items with the slamigan and whoever helps him with a new idea, will share the profits with them.

Grainger apologizes to Casey who tells him not to worry about it, he won’t be there for long.

Severide is talking to Kidd about the fire and that being his childhood home. Chief Boden walks up with detective Corwin from narcotics, he wants to take a look at that fridge in the house that went on fire. Severide heads out with him. When they arrive the place is boarded up, but Severide pries open the front door to get in. Severide and Corwin are in the kitchen and open the kitchen door, there is a stash inside.

They hear a noise, Corwin says it is probably a dealer and pulls out his gun. A man comes in and cries that the stash was for Dylan, it is his insulin supply and it’s all gone. Dylan is diabetic. They got a deal on a bulk supply of insulin, they don’t have much money, but it cost them half of what it would have cost otherwise. They thought they were being smart. He asks if she can check the bedroom, if there is a change of clothes, his wife is going to be in the hospital for a while, she is in a coma.

Mouch comes up with an idea for the slamigan brand, flash gear. The other guys come up with ideas too but Cruz says he can’t expand with this, he might have to look outside of 51.

Brett is speaking to Grainger, he says he likes 51 but their captain is wound a little tight. The alarm goes off, man down with unknown causes, Brett leaves with Foster. They arrive at an apartment, it seems that man named Pete may have had a heart attack. Brett is inside the room, she has a pulse. They get the man out of the building.

Casey tells Chief Boden that they can bring someone else in instead of Grainger for the next shift to mix things up a bit. Boden tells him that it is too much paperwork if they change, they will just stick with him, in case he has a reason. Boden gets a call, Casey says never mind and leaves.

Casey arrives at the bar, Brett is sitting with Grainger over a beer and Casey finds out that Grainger bought him a beer. Grainger asks Brett if she had a thing with Casey, she says not really and then asks him if he wants to get out of there. Then we see Brett and Grainger making out.

Severide goes to the hospital and checks on the burn victim, she is still in a coma. He sees the doctor explain to Dylan and his dad about his mother’s recovery, Dylan runs out of the room. Severide joins Dylan in the elevator and he tells him that it is his fault that his mother is in the hospital.

Back at the station, Brett is filling out a uniform request form when Kidd walks in. They start talking about uniforms and Kidd says their uniforms were made with men in mind, not women. Cruz overhears the conversation.

Grainger goes in to see Casey and says he is a good officer and he hopes his being at 51 isn’t a problem with him because of what he had going on with Sylvie. Casey gets up and tells him he is out of line. Grainger replies that Casey is unprofessional. The alarm goes off, saved by the bell. Brett heard the exchange between the two of them.

51 responds to a car accident, the car is turned over and slammed into a wall, a woman is trapped. Casey tries to keep the victim calm while the team gets to work. They manage to get her out, thanks to Grainger who comes out with a way to release the vehicle without hurting her.

Back at the station, Brett confronts Casey and asks him what is wrong with him, he keeps riding Grainger. She says he is still in love with Dawson and he should figure that out so he can go back to being the Casey that everyone is used to, and not this.

Cruz is announcing the newest product in the slamigan brand, he says he came up with the ID, gear that is designed for women, it is time for a change. He shows a prototype and the women aren’t crazy about them.

Severide goes to see Dylan’s father, they are about to bring Angeline out of the coma and he can’t find Dylan. Severide goes back to the house to look for Dylan, he finds him upstairs, he is packing a bag. Dylan says he heard his parents talking before the fire, all their money went to medicine for him, they have had nothing for themselves and are better off without him. Severide tells him that he was going through some tough times at his age, he has to lean on the people who love him. Severide tells him that his friend, is going to maybe be able to help him with getting his medicine and he will tell him more on the way to the hospital to see his mom.