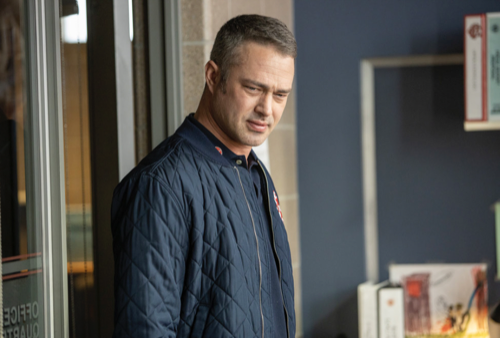 In tonight’s Chicago Fire episode, Chief Wallace something came down from headquarters that his him scrambling, three have to report for TRA training, and they have thirty minutes to get there.

Mouch walks into his office and Wallace asks him why he didn’t take the TRA training course three years ago when he was supposed to, Mouch says he doesn’t know, so Wallace to report there now. Diggins is in 51 since they are four people, Brett is annoyed, she doesn’t like working with him. The siren goes off.

They head to a scene of an accident, the passenger says she told the driver to pull out and he started yelling in her face and crashed the vehicle. Casey asks the driver to turn off the engine, the driver refuses and when Casey leans in to turn it off, the driver starts driving with Casey stuck in the window, slams on the brakes, and sends Casey flying through the air and smashing to the ground.

The crew grabs the driver when he comes out of the car, Casey tells him that he almost killed him. Casey looks ok, he hit his head but otherwise, he seems ok.

Brett is in the hospital, Diggins offers to write up the paperwork. She asks him why he is acting like Mr. Rogers when he is usually an erupting volcano. He says he has applied to be a big biddy and he needs a referral. She says she barely knows him and she is not sure if she is the right person to give him a referral.

Casey is waiting for some aspirin to kick in when Severide comes to see him and tells him that Kidd bought something for the apartment and it bothers him that he doesn’t know what it is, he doesn’t do well with change. Casey then walks through the halls and heads to the bathroom, he keeps blinking and puts water on his face, his vision is blurred. He goes to see Chief Wallace, he tells him that he needs an evaluation of the floaters by end of the shift.

Christie drops by to see Casey; she got a call from the bank of Chicago for uncle Jake’s account. Uncle Jake had a safety deposit box and he left it for the two of them to open, she asks him to join him. He is against going but he eventually gives in to her, they will go tomorrow.

Diggins and Brett walk into the kitchen and grab some food. Herrmann says that he just got off the phone with Cartwright over at 32 and he says to Diggins that he didn’t fill out the incident reports from his last shift. Diggins says that Cartwright is a bit overworked right now and he will be happy to swing by there and sort this out with him.

In the TRA training, Mouch is asked to go first because he knows a lot, so the chief suggests it. Mouch pulls a move that the academy doesn’t teach, and the chief is not impressed.

Diggins is back, he tells Kidd that her taking the Lieutenant exam, nothing but trouble. If she makes one wrong move, it is lawsuit city. Then he says he is proud to see a young female firefighter go for her dreams. When the siren goes off Severide turns to Kidd and says it goes without saying to just ignore Diggins.

They respond to the call; a man’s hand is stuck within his exercising equipment. The jaws of life have to be used to set him free. A bar went right through his hand. Diggins is annoying, he tells the wife that she has a lovely home.

In the TRA, everyone is doing their training, Mackey is there, and she is doing great. Chief has completion forms for everyone. Mackay gets a job offer at 33 to be a paramedic, one reason they want her is because she is fluent in Spanish and the other is for her talent. She says she doesn’t know what to say, she will think it over. Mouch doesn’t get his TRA completion, chief tells him he didn’t do any of the drills that he gave him, instead he showboated, so he can take the course again another time. Mouch is in shock and speechless.

Casey is in the washroom, the pain in his head is bad. Brett is walking out of the fire station, Diggins runs up to her to sign his form to be a big buddy. The form is to adopt a cat, she thought it was like signing up for something like a big brother. Brett says she is happy to help, she is sorry for the confusion. Diggins tells her that it means a lot to him.

Christie is sitting in the bank, Casey shows up. They open the safety deposit box and inside there is a box with a Rolex. She tells him to keep it, she doesn’t want it. He tells her that if it is worth anything, they are splitting it, end of the story. She says she thought she was going to find answers to why mom is the way she is, her family always kept secrets.

Chief Wallace confronts Mouch and asks him why he couldn’t follow orders. He says he never gets a chance to show off what he can do, be the hero, he got a little caught up because the kids were looking at him and impressed that a guy like him at something to show the young firefighters. He apologizes to chief Wallace and says he will take the test again and do it their way.

Casey is in the bathroom again, he is clearly having problems with his vision since he hit his head.

Mackay tells Brett about the offer, she tells her that she will be missed but she shouldn’t give up on an opportunity like this. Higgins comes off with his cat, he tells her that his life is a mess since he got the cat and since she signed the paperwork as his second, the cat is hers.

Casey finds out that the watch is worth a lot of money, $80,000.00. Casey tells Christie and says she didn’t take it. The watch was given to their uncle by his first wife that died fifty years before him. She tells him to keep it, she thinks that there is a reason why uncle Jake wanted him to open that box. She tells him to see a doctor about his headaches.

Severide is home when the delivery arrives, it is a basketball shootout machine.