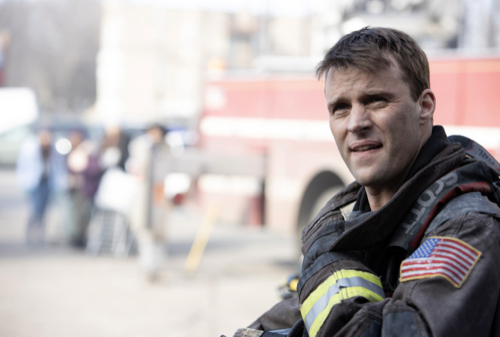 Tonight’s Chicago Fire season 9 episode 10 looks like it is going to be great and you won’t want to miss it.   While you’re waiting for our recap make sure to check out all our Chicago Fire recaps, news, spoilers & more, right here!

In tonight’s episode of Chicago Fire, the episode begins with Mouch who finds out that Billy Mahone Sr. died and goes running out of the kitchen. Kidd has her wall of inspiration to help her get through her exam. The siren goes off and the squad runs out.

A manager who has bad asthma is in a building that is on fire. It’s a laundry mat and the crew tries to make their way through to find the manager and anyone else who might be in the building. They found the manager and are bringing him out. Kidd gets knocked over when the dryers explode and got the wind knocked out of her.

Back at the station, Severide says it is strange that the dryers exploded like that. Mouch gets a call, he finally got it, pipes and drums. It is the band that plays the funeral marches. Entering the brotherhood only happens when someone dies, Billy Mahone Sr., and Mouch now has an audition.

Kidd tells Brett about when the dryers exploded.

Gallo goes in to see Casey and asks him if everything is ok with him. There was a moment at the fire when he looked like he lost his bearings. Casey says the blast knocked his mask off and he got debris in his eye. Gallo says he looked rattled outside. Casey gives him heck and tells him to concentrate on doing his job.

Brett meets Chief in the hallway, she says she has gone over a list of potential medics, it wasn’t the most inspiring read. There is a name she doesn’t know there, a Jovie Delantis, and she is going to call around and get more information on her. Casey walks up and Brett shares with him about the list, he says what about Violet, but Brett assures him that she is very happy at 20.

Brett asks around about Jovie Delantis and Violet says she knows her, but she is leaving because she is pregnant again. The siren goes off.
Casey is in the truck and Gallo can see that he is still having some sort of problems. The truck gets a flat, Kidd is driving and they almost hit two girls. Casey shouts to pack things, they are going on foot to the fire.

Another fire at a laundry mat and the same things happens, a door blows off of a dryer, Severide says he has never seen this before, and certainly not twice.
Herrmann is going through some files, trying to see if there have been any more laundry mat fires with the doors blowing off the dryers.
Kidd is checking the truck after the tire incident, they don’t have the tire in stock so they are out of action for a few weeks. Kidd says she should have seen the pothole. Kidd then asks Casey if he thinks the laundry mat fires are connected. They go through the files, the find three more similar fires, they all started in the dryers. Casey says maybe it is an insurance scam or someone is targeting them.

Kidd tells Brett that her temporary partner, Violet, is a jinx. She made out with Severide before they responded to the fire, everything was going well, and then she hits the pothole and some photos that she had on the wall fell off.

Casey and Severide go back to the first laundry mat where they responded. A girl who works there tells them that she didn’t see anything that happened because the cheap laundry detergent is so perfumed that it hurts her head. Severide thinks that maybe the laundry detergent has a combustible compound.

They go see Marcie who is responsible for the detergent and tells her it is contaminated and she can’t let any more go out. Casey is having problems again. Marcie tells them that they recently changed chemical suppliers and are halting production until this is figured out.

At the station, Violet talks to Brett about Gallo, mentions they had a drink together. Mouch gets a message and runs out of the station, he says he has a real emergency, they want him to audition in twenty minutes. Casey tells him to knock ‘em dead.

Mouch is at his audition and there is a problem, they want him to perform a different song than he has practiced.

Gallo tells Casey how can a firefighter lookout for their captain if he is holding out on his own situation.

Severide calls the station, they found most of the detergents that went out except for one truck, but they know where it is. Casey and Chief head out to find the truck and when they do it is on fire. Chief tells the driver, it is not a fire, is a bomb. They move everyone back, Severide and Casey open the door, the rest of the squad are ready to go. It’s all good, they get the fire out.

Brett gives Violet an update and then she says she knows she is happy at 20, but there are so many reasons why she should be at 51. Violet says she is in, she was going to suggest it herself and she is really glad that she asked, they make a great team.

Violet tells the squad that she is permanently part of 51, Brett buys Casey and beer and tells him that he is a good friend and a good captain.