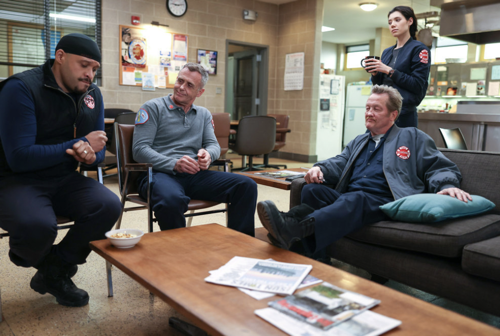 Tonight’s Chicago Fire season 9 episode 12 looks like it is going to be great and you won’t want to miss it.   While you’re waiting for our recap make sure to check out all our Chicago Fire recaps, news, spoilers & more, right here!

In tonight’s Chicago Fire episode, the episode begins with Kidd and Severide, he is quizzing her. Kidd gets a call at the station from a girl, the caller was blocked and when Kidd takes the call, she barely hears her, and it hangs up.

Cruz announces that he is taking a baby class. The siren goes off, they respond to a car accident, there is a man stuck up in a tree with a branch through his chest. Kidd climbs the tree and tells the man they are going to get him down. Two other people are in the car and look hurt as well, but not as bad as the guy in the tree.

Severide goes up a ladder with Casey. Together they secure the man while Severide cuts the tree branch that is lodged in his chest. The ease him on his side, there is barely a pulse, he is put in the hospital. Casey tells Kidd that it looks like she climbed a lot of trees in her day. Severide tells her the guy has a 10% chance of making it, would have been zero had Kitt not gone up there.

Back at the station, Severide tells Kidd that they have more flashcards to go over. She tells him that she loves everything about him. Kidd tells Mouch that she got this weird caller earlier, if they call back can he pass the call to Severide’s office. Casey is in the kitchen cooking corn beef. He tells Brett that he feels like he won the lottery since his diagnosis, he thanks her for her support.

Donna is in the station, her internet is out and she has to teach her Zoom class from there. Cruz and Mikami are trying to learn how to swaddle a baby, Herrmann walks by and does it basically with his eyes closed. Kidd’s caller calls into the station again, she takes the call, the person tells her that she has to help her. She is in a basement, she doesn’t know where. They want to kill her, they think she snitched, her brother is upstairs and they are having some sort of trial.

If the cops show up, they will kill her brother. They get cut off. The girl calls Kidd back, she hears shouting upstairs, she tells her it is like a jail cell, there is nowhere to go. Kidd asks her if there is anything she can use as a weapon, the answer is no. She says she should have stayed in Kidd’s class, she didn’t think she was good enough. Kidd asks her name, she needs something so she can help her. She says she can’t help her, she hangs up.

Kidd tells Boden about the girl that called her, Severide says she sounded spooked. The girl was in Girls On Fire and they may have tracked her down, they have an address.

Casey goes to see Brett and asks her what is bothering her. She says when he was going for the testing she told Greg she was helping a friend and had to go, he saw his name on the screen and took it as her keeping his name from him on purpose – he pretty much called things off. The alarm goes off, a person in distress.

The door is locked when they get to the house, but Casey hears a guy screaming. She turns around and kicks the door open with the back of her foot. Inside the house, a man is stuck in a sauna and the lock is busted on the door. Brett goes to look for a power box so she can cut the power in the sauna, she then calls for assistance. They get in, the man has passed out and is dehydrated. A little oxygen and he is coming back.

Boden and Severide head over to the address that they found, the mother is looking for her two children, she says they never came home. At the station, Cruz finally mastered swaddling a baby and challenges Herrmann to a challenge, who can do it faster. Meanwhile, Brett says she is sorry to Casey that she unloaded on him about Greg. Casey says it’s all good and he sure Greg will come around. The contest begins, Herrmann wins and tells Cruz to have five kids and come back to see him afterward.

The girl calls Kidd again, turns out her name is Alia, Kidd hears someone come after her and demand that she get upstairs, Alia is crying and begging them to leave her alone. Kidd is listening and can’t believe what she is hearing. She calls Severide and tells him to turn the sirens on, she wants to hear if they are close. Kidd says they are close, she can hear the sirens. Boden knocks on the door and says there is a gas leak, it is going to go up like a fireball and everyone has to get out.

The guy goes back into the house, but before he does, Boden says he has been warned. Severide says now what, Boden says he doesn’t have a plan B. Everyone starts running out of the house, thinking it is going to blow up. Alia and her brother are the last two to come out, Boden grabs them and puts them in the truck. Severide calls Kitt and tells her they got them, they are ok.

Casey is leaving the station, he sees Brett leaving too. Casey then goes to see Greg, he tells him that he and Brett are not an item and he is not trying to get in the way of that. Greg says he is not thinking about what he is going to do, he is thinking about Sylvie, she is in love with him.

Cruz is in class, the is a father in class who says he is king Swaddler, Cruz says there is a new prince in town, he is going to crush him. Elia stops by to see Kidd, she wanted to thank her. She says the police arrested the gang leader, they shouldn’t be bothered anymore. She tells Kidd that she saved her life. Alia asks to return to Girls On Fire, Kidd tells her she is welcome anytime. Kidd has to go, she has her lieutenant test.