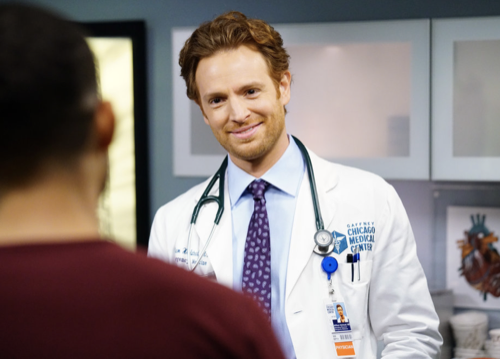 Tonight on NBC their medical drama Chicago Med airs with an all-new Wednesday, February 11, 2021, premiere episode and we have your Chicago Med recap below. In tonight’s Chicago Med season 6 episode 7 called, “Better Is The Enemy Of Good,” as per the NBC synopsis, “Will runs into trouble when one of his trial patients falls ill. His own stress and symptoms have Ethan struggling to get through the day.”

Crockett is still in mourning. He never really gave himself a chance to grieve the loss of his daughter. She died from leukemia and Crockett blames himself for her death because as a doctor he thinks he should have saved her. However, there was nothing he could have done. Crockett wasn’t God and he couldn’t prevent his daughter’s death. The only thing he could do was grieve. Crockett doesn’t really give himself that chance because he prefers to grieve in silence. He didn’t even turn to his ex-wife for help when they both lost a child. Losing his daughter had been so tough for him that he didn’t or wouldn’t fight for his own marriage. He let his wife go. They both moved on and she seems to be faring much better than he is because she can see their daughter’s things and not break down in tears.

Crockett started to cry when he saw his daughter’s things, but then he shut the box up and he pretended like it didn’t even happen. Crockett doesn’t share his grief. He keeps what he’s feeling bottled inside and he pretends like there’s nothing wrong whenever someone gets too close to questioning his easy lifestyle. Manning is just one in a long line of women who have fallen for Crockett. Only she was smart enough to realize she couldn’t change him. Crockett loves them and leaves them type. Manning knows that their relationship isn’t permanent nor is there a chance of it becoming so. She also knows that she has to protect herself from falling into the same trap that many other women have done. The other women all thought that if they love Crockett enough that they’ll change him. And Manning knows better.

Manning has had quite a few challenging relationships. She wasn’t looking for anything serious right now because she just left a complicated situation and so what she has no with Crockett works out great for her. They were friends with benefits. They were also co-workers. They worked on patients together and their last common patient had come in with signs of pneumonia. Manning ordered tests to be done. The tests later came back clean of pneumonia and so something else must be wrong. It was a mystery. The doctors all love a good mystery and Choi was even being mysterious. Choi has been at the office every day all day since he became Chief of the ED and so it was odd when today he said he was coming in late because of a personal matter. Everyone what he meant by that because they all knew he didn’t have a personal life.

How can he with the crazy hours’ works? Choi has dedicated his life to the job and so it was curious when he suddenly took the morning off because of a personal matter. Choi wasn’t someone that they could talk to like they used to. He was standoffish. He also came into work and he acted like everything was normal. He treated patients like he always does. He was currently treating a Dr. Cohen. Cohen isn’t a medical doctor. He’s a doctorate sort of doctor and he’s delusional. He believed that a work colleague was out to get him. He was so sure of this that he claimed that this colleague was following him and wearing different costumes in order to get close to him. And only Cohen saw this, no one else did and so Choi asked for someone to call Charles down there because he felt they needed a psych evaluation.

Charles came down to the ED. He spoke with Cohen and he tried to ask Cohen about the medication he was taking. The nurses found a bag of pills in Cohen’s things. Choi had to get ask for blood work to be done because no one was sure what Cohen was taking and so either he had to come down from whatever he was on or they had to speak to a family member. Maybe the family member would know what’s Cohen’s illness is. Choi and Charles were talking about what to do next when they overheard Cohen yelling at the nurse. Cohen had thought the nurse was this Mason in disguise. He demanded to be left alone and he kept telling the doctors that no matter what he does – Mason refuses to leave him alone. Charles believed the patient was suffering from something called Fregoli. It’s a condition when someone believes they’re being relentlessly persecuted.

Charles was just explaining to Choi what it is when Choi passed out. Choi was taken to the nearest hospital bed and they lifted his shirt to find scars. He just had surgery. He had gallbladder surgery that morning and he checked himself out against the doctor’s advice. He should have been laid up somewhere recovering. Charles ordered for medication to be delivered to Choi and he was turned into a patient. Choi couldn’t go back to work. Charles had officially taken over Cohen’s case and he was the one who later spoke to the man’s daughter. Cohen’s daughter claimed her father was taking all those pills to increase his work capacity. She hadn’t known that those pills could cause a psychotic break or that her father had turned a former colleague into the boogeyman. Mason wasn’t out to get him. Mason was dead.

Mason has been dead for a year. He couldn’t possibly be out to get to Cohen and so Cohen’s condition stumped Charles. Charles didn’t know why Cohen was choosing to fear a dead man. He was working on this case while Goodwin was dealing with her son. Her son a representative for medical supplies and he stepped on a few toes. He tried to upsell a new device to a doctor in the middle of surgery. Goodwin was informed about this and she was told that Michael wasn’t welcomed back into that doctor’s OR. She later talked to her son. She told him that he has to tread carefully with doctors and he came back at her that she should be more supportive of him. Michael thought Goodwin should be on his side just because he was her son. Only she couldn’t do that. She couldn’t give him preferential treatment.

Goodwin talked about her dilemma to Maggie. Maggie was a mother herself now because she was adopting her foster son Auggie and Auggie even calls her “mom” and her husband “dad”. Auggie has become the center of his parents’ world. They love him and so Maggie could understand where Goodwin was coming from when she spoke about her fears. Goodwin knows that Michael does his best to please her. She also knows that she can hurt him the most and so she’s going to try to find a way to repair their relationship after this latest fight. Meanwhile, Choi was recovering. He was doing much better now that he had finally accepted treatment and Charles spoke to him about his mindset. Choi had to explain to him why he felt the need to return to work so soon after surgery.

And Maggie later received some good news. Her foster son has a brother and the brother was found. This could be wonderful. Auggie now gets to reunite with his brother and who knows. His brother could potentially be a match for him as well.

And Halstead later asked Dr. Virani out on a date, but he still hasn’t told her that he broke the rules for the clinical trial or that what he did basically means the trial couldn’t continue.

And Manning and Crockett’s patient had cancer. Their patient chose not to be depressed about it and he was going to live the rest of his life married to the man he loves. Seeing them so happy, convinced Crockett to look at his daughter’s things again. He went through them and he found a DVD that he later played for both him and Manning. They watched his daughter’s birthday party together and Manning became someone that Crockett could depend on.