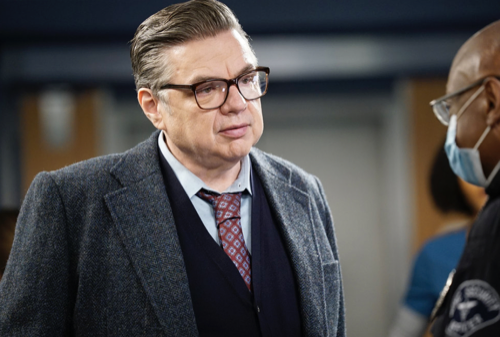 Tonight on NBC their medical drama Chicago Med airs with an all-new Wednesday, March 17, 2021, episode, and we have your Chicago Med recap below. In tonight’s Chicago Med season 6 episode 9 called, “For The Want Of A Nail,” as per the NBC synopsis, “As Maggie deals with her own trauma, she steps in to help a mother in need.

Dean continues to stir the pot with more than one doctor. A patient comes to Med needing immediate treatment but doesn’t want it from them.

In tonight’s episode of Chicago Med, Auggie is gone. Maggie ultimately decided to let him go because she knew he would be happier with his brother and that’s something she couldn’t deny him. It also didn’t hurt that his new adoptive parents were good people. They were willing to take on a sick child. They were raising Auggie’s brother Keshawn to be a smart and caring young man and so they were bound to do the same with Auggie.

He was better off without Maggie. It was hard for her at first to accept that, but now she does and now she’s letting him go. She was packing up the stuff that he left at the hospital when Goodwin came in. Goodwin understood more than anyone how hard it was for Maggie to give up the little boy and so she told her friend she was here if she needs her.

Elsewhere in the hospital, a patient was brought in a nasty head wound. Dr. Halstead was assigned her doctor and he asked her several questions only she had a question of her own. She asked which hospital she was in. Ramona as it turns out had asked to be brought to East Mercy hospital and not Chicago Med.

She was very clear about that. She didn’t want to go to that hospital and they took her there anyway. Ramona was upset when she learned where she was. She demanded to be taken to a different hospital and she had needed to be sedated because she was pushing people away. Ramona hadn’t wanted any doctors from Chicago Med to touch her. She was irrational in refusing treatment and Halstead had to call in Dr. Charles.

Charles spoke to Ramona. He asked her why she wanted to go to East Mercy and she said that there they don’t tie her to her bed. She had to be restrained after she started fighting, but she was willing to play nice if she could be transferred and they could only transfer her if she was in a stable condition. Ramona had to agree to a CT. She said fine as long as they didn’t touch the nail in her foot.

She accidentally shot herself with a nail gun and she passed out from the pain. It’s why she has a nasty cut on her head. It’s also why she was later shown to be bleeding in the brain and so she needed surgery. She needed surgery right now. Halstead tried to convince her to do the surgery at Chicago Med and she instead told them that East Mercy would handle it.

Halstead tried to tell her that she needed to fix it now. She told him that the sooner he lets her go to the other hospital the sooner she’ll be treated and so Charles told Halstead to let her go. Charles saw how worked up Ramona was. She wasn’t going to feel comfortable until she went to the hospital where she felt safe and so Halstead had to let this one go. He wanted to detain her.

He wanted to do the surgery there and he couldn’t because the psych consults as well as the patient was telling him to transfer her. Only Halstead had a gut feeling. He reached out to East Mercy to ask them about Ramona and he was introduced to Dr. Bridges. Bridges have been treating Ramona for a while now. It seems she’s obsessed with him.

Maggie planned on donating the stuff Auggie didn’t want anymore. She went to a charity shop near the hospital and she met a pregnant woman there who was shopping for stuff for her baby. Maggie gave Tionne’s Auggie blanket as a gift. She knew that money must be tight if Tionne was shopping at a charity shop for baby clothes and so she did this kindness. She gave her the blanket.

Tionne thanked her and the two got to talking. They were talking for a minute when Maggie noticed that Tionne was bleeding. Maggie identified herself as a nurse. She said Chicago Med was around the corner and that money wouldn’t be an issue. She took Tionne to the hospital. Tionne was bleeding so much that they needed to deliver her baby via C-section and unfortunately she didn’t have anyone.

Tionne’s mother was downstate visiting her grandma. She was alone and so she asked Maggie to come with her. The two were in the OR while Halstead was filling in Charles. Charles, Halstead, and April all learned that Ramona has become obsessed with her doctor. She was a frequent flier at his hospital because she took every opportunity to see him. She even started to make up symptoms so that he treats her and he called her out on it last time. He accused her of making it up. Ramona got so upset that she threatened to sue for malpractice and now she “accidentally” shot herself in the foot. Ramona purposely injured herself so that Dr. Bridges. Her delusion is so strong that Bridges wants nothing to do with her and he refused to treat her.

Charles broke the news to Ramona. He told her that Bridges refuses to see her and she got upset. She said her father was a doctor. Her father used to see everyone who needed him and Dr. Bridges should do the same. But Charles told her that it was unethical for Bridges to treat someone who was family or like family. He somehow made it sound like she meant something to the other doctor and so that convinced her to get her surgery at Chicago Med. It was good news for her. Halstead was glad that she was getting treatment and he heard back from Dr. Virani. Virani told him that they have filled their quota for the clinical trial. They no longer needed to look for new patients and Halstead told April as much.

April has been helping him enlist patients. She also had a gut feeling of her own when she was told to start turning new patients away. Meanwhile, Maggie’s new friend Tionne delivered her baby. It was a beautiful baby boy and sadly he suffers from a condition known as spina bifida occulta. Anything could have caused. Tionne’s diet could have even led to the condition and so she was beating herself up because she never heard of this condition much less was warned against it. It was her doctor that should have informed her. Tionne didn’t have money for the many checks she deserved and she sure didn’t have money for the long road to treatment. Tionne later contacted Children Services.

Maggie saw the lady from Children Services outside of Tionne’s room. She tried to get answers about why she was there and the lady wouldn’t give her information because it was unethical. Maggie didn’t know what was going on, but that was happening a lot around the hospital. Dr. Archer is a new doctor at the hospital and he ran into some problems with Manning. Manning knew his patient and she diagnosed his patient behind Archer’s back.

She also got Crockett involved. Crockett and Manning were seeing each other. Archer found out about it and he reported it to Choi. Choi later told Manning to report her relationship to HR. Manning hadn’t liked that because she wasn’t sure if she was at that point in her relationship to do that and so she didn’t want to report it.
‘
Manning told Crockett she didn’t want to report it. He took that the wrong way and now Manning doesn’t know what to do. She just wants to blame Archer. Archer was a difficult doctor to work with and he tends to step on other’s people’s toes, but he does care about helping the patients and that’s what he’s been trying to do. Even as he himself went behind Choi’s back to treat Choi’s patient.

Charles was regretting talking to Ramona because he tried to help her deal with the grief from her father’s passing and she instead became obsessed with him this time. She broke out of her restraints to see him. She cornered him alone in an elevator and she frightened him. Charles was truly scared about what she was capable of.

And later Maggie talked to Tionne about her own regrets about putting her baby up for adoption. She told Tionne that things were going to be hard for her and yet Tionne wants to be a mother and so she didn’t deny herself this. Maggie’s convinced Tionne to keep her baby.

Maggie also realized that she wanted to track down her own child.

Manning lastly realized she doesn’t want to lose Crockett and so she agreed to go to HR with him.