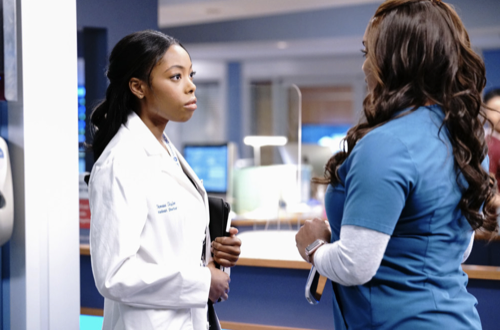 Tonight on NBC their medical drama Chicago Med airs with an all-new Wednesday, May 12, 2021, episode, and we have your Chicago Med recap below.

In tonight’s Chicago Med season 6 episode 14 called, “A Red Pill, a Blue Pill,” as per the NBC synopsis, “Third-year med students begin their rotation in the ED, and Maggie keeps a careful eye on one of them.

Manning, whose mom’s health takes another decline, tries to cover up how she broke the rules to treat her.”

In tonight’s Chicago Med episode, the student doctors are back. Dr. Choi was auditioning them for the opportunity of joining the ED and there was only one position open. However, there were a group of student doctors all vying for said position. They, therefore, had to be on their best until Choi makes a decision and one person stood out. Vanessa Taylor stood out. She met Maggie and Maggie recommended her for the program.

She even went to Goodwin to get Vanessa in the running for a job next to her. Maggie just wasn’t being honest about why she went to a bat for a stranger and so here’s something funny. Vanessa wasn’t really a stranger. She’s the daughter that Maggie put up for adoption when she was sixteen and at first Maggie sought her out because she wanted to make sure that her baby was okay. Then it sorta shifted.

Maggie now wants to be a part of Vanessa’s life. She was too afraid, to be honest about why she wanted to be around her because she was secretly afraid Vanessa might reject her and so she used subterfuge. She pretended to run into Vanessa at the resident fair. She created a bond with the younger woman and now she wants to be her friend.

Maggie knows what she’s doing is wrong. It’s why she hasn’t told anyone other than the resident therapist about what she’s doing and it’s why she’s trying to rig the competition in her daughter’s favor. Maggie kept a close eye on the student doctors. She told Vanessa she needed to assert herself more and she was always there with advice or assistance. What Maggie was doing unethically.

It was a competition for a reason. Just because Vanessa is her daughter, doesn’t mean she’s the best candidate for the job and the usual sane Maggie would know this. The tiger mom Maggie doesn’t. Maggie stayed following the student doctors while Dr. Archer was treating an unusual patient. The patient’s name was Neill. He passed out from stomach pains and was rushed to the hospital, but Neil doesn’t wish to be treated because he doesn’t think the doctors are real.

He thinks they’re living in a simulation. He even took a little red pill that he was told by his online buddies would help him to wake in the real world and now that pill might be making him sick. And Neil didn’t care if he died because he said he had to die to live.

Neil was so sure the world was a simulation because he said it was impossible for less than one percent to control ninety-nine percent of the world. Archer knew Neil needed a psych eval and so he sent for Dr. Charles. Charles later spoke with Neil. He tried to convince him that the world was real. Nothing he said he worked and so Archer tried to talk to Neil. He told Neil about the soldiers he would see die from preventable issues.

He then got upset when Neil tried to tell him that people didn’t really die. Archer hit Neil and then pretended he was just testing Neil for ruptured appendicitis. It turns out Neil did need to have that organ remove. Archer ended up finding out what was wrong with him and he tried to pretend he didn’t strike out at a patient.

Only that wasn’t working because the other people in the room saw him. They saw that Archer lost it with a patient and Charles for one wanted Archer to sit down with him for a session. Charles was supposed to have talked to Archer before now but Archer kept finding a reason to ditch. Things were different now because Charles saw Archer at one of his worst moments.

Charles was now demanding Charles see someone and he also didn’t want to force Neil to accept treatment. Which was a problem for Archer. He tried going behind Charles’s back to get another doctor to force Charles’s hand and he became angry when Choi wouldn’t help him. Choi has butt heads with Charles before. He knows that Charles is doing what’s right and he wasn’t going to go against him.

This did not make Archer happy. He went into the patient’s room when no one else was around and he did something to him. Something to knock him out. Archer then called for help and he said they could treat the patient because he wasn’t awake to deny treatment. Archer even forced April to go along with his decision.

He forced treatment on a patient and he himself crossed a line. He was doing in part because he didn’t like what the guy said about his military friends but ultimately his decision was more about him than it was about the patient and Maggie was doing the same thing with her daughter. Her daughter had been put in charge of a patient while Choi stepped away. Maggie then swooped in to help her daughter and they operated outside of Choi’s parameters.

Choi told the student doctor that she could put in a port. She accidentally punctured the patient’s lung and so Maggie told her that she needed to fix it before Choi came back because at least then he would see she fixed her mistake. Maggie should have brought a more experienced doctor to fix it. The only reason she didn’t is that it’s her daughter and so she made things worse for Vanessa. Not better.

Vanessa later got in trouble and Maggie did her best to fix it. Maggie begged Choi to give Vanessa a second chance and he said he’d take that into consideration but Goodwin was in the area and she saw what happened. She came to have questions of her own why Maggie was going above and beyond for a student doctor.

Another person who was making mistakes was Dr. Manning. Manning couldn’t get her mother Carol into Halstead’s clinical trial and so she stole drugs from the clinical trial. She started giving them to her mother on the side. Her mother eventually had to be brought to the hospital and it turns out her mother’s health was improving but Halstead found out about the stolen drugs. He confiscated them from Manning.

He also did some research to see what would happen if Carol continued taking the drugs and what he found wasn’t good. Carol should not be taking the medication. The medications were supposed to act as LVAD and Carol already had one of those. She shouldn’t be risking her precarious health. And yet Manning didn’t want her mother to stop taking the drugs.

Manning feared losing her mother more than she feared getting in trouble. She also didn’t care that she was risking Halstead’s career and so she tried to talk to her boyfriend Crockett about it. Only he was busy creating a baby that had gotten shot through the walls. He didn’t see how much Manning had needed to talk and so the opportunity passed them by. Manning and Halstead later talked. He said he turned down Carol’s LVAD.

Her heart was beating just fine without it and so the LVAD was in the way. Carol’s heart was improving. She might not even need a heart transplant and Halstead wanted to help her. He agreed to secure more clinical pills for Carol. He and Manning were going to keep giving her the medication and it was their secret.

Manning wasn’t going to tell Crockett. Even if he did suspect something and so the secrets were continuing. Maggie tried to talk to Vanessa afterward, but Vanessa didn’t want to speak with her. She blames Maggie for her being humiliated and she needed space from Maggie’s friendship.

Charles also tried to talk to Neil about what really happened with Archer and all Neil could say is that he was cut open and his wires were restructured. He now believes he’s stuck in the simulation. And he made a terrible witness against Archer, but Choi tried one more time to get Archer to accept professional help. And Archer refused to take it.