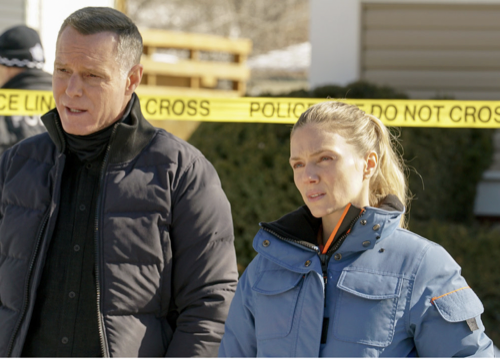 Tonight on NBC their drama Chicago PD returns with an all-new Wednesday, April 7, 2021, season 8 episode 11 called, “Signs Of Violence” and we have your Chicago PD recap below. In tonight’s Chicago PD season 8 episode 11 as per the NBC synopsis, “A wellness check on a family reveals signs of foul play and Detective Hailey Upton is determined to find the parents and young daughter.

As Upton delves further into the troubled family dynamics, she finds herself reflecting on her own childhood trauma.”

In tonight’s Chicago PD episode, Halstead and Upton are in bed, he tells her that he loves her and she doesn’t respond. She gets dressed and rushes out, tells him to hang out there, she will be back in a little bit. Upton is in the car, she hears a missing person and responds to it. She arrives there and speaks to Banks, a CPD officer who tells her that a neighbor, Jessica, called it in, she hasn’t seen her neighbors in a few days. Cardon family; dad Ray, wife Helen, and their daughter Becca. There are no signs of foul play. Upton speaks to Jessica, she says she is probably wasting her time, but something just seemed off.

Upton goes in the house, it looks bare, and it has been breached recently. Upton pulls down the sheets on the bed, there is a huge stain, she does the same to another bed. Then she asks Banks to help her move the bed, the carpet has been replaced and it looks like blood underneath Upton calls it in and requests a crime lab.

Halstead shows up, so do Ruzek and Voight. They find out that the family’s phones are shut off, their cars are in the garage and there are empty suitcases upstairs. Burgess comes in and says she has something weird, she ran the social insurance number for Ray Cardon, the problem is he died four years ago. The husband was using a dead man’s name and Helen is not on paper anywhere. Becca is not registered with CPS, missing persons or private schools. Voight tells them to run forensics to find out who this family is.

Halstead and Upton go to speak to Jessica to get as much info as possible. Upton asks her daughter, Annie, if she was friends with Becca, she says no, she didn’t go to her school. Jessica says that Becca is shy, she keeps to herself. Jessica says sometimes she wondered about how old-fashioned they were, Ray runs the house.

Upton tells Halstead there is something wrong with this family. The blood in the master is two days old and belongs to a female. DNA doesn’t match anyone they have in the file. Ruzek ID’s Ray from the fingerprints on the men’s shoes in the house, his name is Ray Ames, and has lived in fourteen states in the past twenty years, has a hell of a sheet, multiple fraud investigations, two domestics when he was younger, mostly deals with Ponzi and pyramid schemes. DNA from a toothbrush shows that Becca is Ray’s daughter.

Atwater comes in and says they have a lead, Ray’s debit card was used downtown yesterday right after they went missing. They watch video surveillance from that transaction and Ray is seen with Becca, he withdrawals fifteen hundred dollars. Becca looks scared, but she is seen taking his hand when they leave. There is another camera, it is not domestic, it appears another man is there and he took them. Voight is thinking maybe the guy is someone from Ray’s past coming back to haunt him.

Halstead and Upton go back to the house to look it over again. She tells him that she is sorry for the morning, she was overwhelmed and panicked. He tells her it is ok, there is a little girl missing, they can do this later.

Annie admits she knows the truth. They bring Annie to the station, with her parents. Annie says she is best friends with Becca, they hide it because the Cardon family is scary, her father doesn’t let her go to school, she is scared of her parents. Her father hurts them. Two nights ago, Annie saw a man walking through the Cardon house, he put them in a car, a station wagon, one of the old ones and he drove away with them.

Upton finds out that the station wagon is a Mercury and they see it on video, the plates are stolen. The video leads them to a warehouse, it pulled inside and then they lose them. The team splits up and takes a look around.

Upton sees sheets stuck in the snow, the same sheets from the house, when she pulls it, she finds a dead body underneath. She has no teeth and her fingerprints were removed, looks like an organized crime scene. Halstead walks up, he says he got lucky, a security camera caught a man in a vehicle, not a station wagon, but they might have facial recognition and it could be the offender.

At the station, the ID the guy, his name is Alejandro, he works in clean up and extortion for organized crime, most recently for the Albanians. Voight says Ray upgraded, he tried to con the big guys. They think Ray was dumb enough to steal from the Albanians, skim off the top. Halstead thinks there is more cash out there, Alejandro killing Helen for fifteen hundred dollars makes no sense.

Halstead and Upton head to a brothel where Alejandro frequents, and they speak to Zara, he is one of her regulars. Halstead tells her to tell her where he lives, he will shut the place down and tell the owners it is her fault. Zara gives them the info.

Halstead and Upton head to the property, there is a shed, and Alejandro is coming out, he has a gun on him. Voight tells them to wait for backup, Upton makes a run for it and jumps Alejandro. Halstead takes over, Upton goes into the shed and she can’t find Becca.

Alejandro is at the station. Voight is upset with Halstead, he tells her that she didn’t have a search warrant and didn’t wait for backup. Halstead says Alejandro had a gun.

Halstead shows Annie some photos of men, asks her to pick out which one she saw in Becca’s house the night she disappeared. Annie says she doesn’t know who it is. Halstead asks her to look again, but this time, slowly. Halstead has her finger near Alejandro’s photo, Annie says it is him. They offer him a deal, he says he doesn’t know the Cardon’s and he doesn’t know why they entered his home; he knows they don’t have enough. The team finds out that Alejandro is making a deposit every month to a long-term care facility, but they can’t look into it because of privacy reasons, Halstead wants to do it anyway and Voight tells her now.

Halstead is frantic, she is worried that they won’t find Becca. Voight tells the team that there has to be a clear link to Ray and Becca, and they need to find it now. Outside, Halstead asks Upton what is going on with her, she is spinning out. He tells her that he wants to know what is going on, so he can help her. She won’t tell him.

Halstead is at the station with Burgess and tells her that there is something about this girl. Halstead says Alejandro was walking to his shed and he had his gun, she thinks he buried them. She gets a blueprint and shoes it to Voight, tells him her theory. The team heads there and they find a tunnel, Ray is dead, but Becca is alive. Halstead wraps her up and gets her out of there.

Halstead is at the station, she is waiting to hear back from med about Becca. Voight is there and he gets coffee for them. She tells him that if she didn’t figure it out, she would have broken privacy and found out who Alejandro was giving money to. Voight talks to her about her family, he tells her that she has a gun and a badge, she is not her family. She asks if she is unfit to be a cop, he says if she is unfit, then he is too. He tells her that she is good at this job and controls herself incredibly well until something touches that bruised part about her and she loses all control. She says she doesn’t want to be that way, he tells her that she can find a way not to be.

Upton arrives home and Halstead is there, she tells him that she never learned how to do it properly, relationships, intimacy, they didn’t get to do that in her house. Her parents would just say I love you and I am sorry after they hurt her. She doesn’t know how to do this, but she wants this so bad, she wants to be with him, be better and learn how to do this. He tells her that they will figure it out because he wants to be with her too and he is going nowhere. She tells him that she loves him, he hugs her