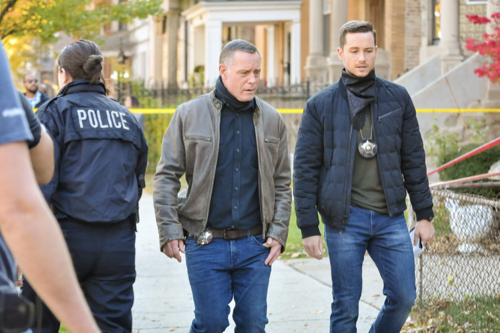 Tonight on NBC their drama Chicago PD returns with an all-new Wednesday, January 13, 2021, season 8 episode 3 called, “Tender Age,” and we have your Chicago PD recap below. In tonight’s Chicago PD season 8 episode 2 as per the NBC synopsis, “Ruzek and Burgess discover a child walking alone in the middle of the street and when they take her home, they discover her entire family has been murdered. Upton is approached with a job offer from the FBI.”

Ruzek and Burgess are in the car, a little girl is walking across the street and they almost hit her. Ruzek gets out of the car and tries to speak to the little girl, she is not talking. Burgess tells her that she is a police office and she is going to help her. Burgess checks the back of her shirt, a label is there with her name on it, Makayla Ward. Ruzek calls it in, the little girl is just staring and not talking.

They found an address, Burgess gets out of the car to go speak to them. Nobody answers the door, Burgess looks in the window and there is a gunshot to the glass and blood. She raises her gun, calls it in and Ruzek gets out of the car. The door is unlocked, they put masks on and enter the house, inside, they find a woman’s body on the floor with lots of blood. And in another room a man with more blood. A third victim and more blood. Burgess sees little footprints in blood, Makayla was there.

Everyone who was in the house is family, Ruzek tells Voight that Makayla is the only one that survived. Voight tells him to keep the cap on the media as long as they can. Back inside the house, Ruzek says it was overkill, it had to be personal. The mother, Claudia, had a clean shot to the head, probably when she answered the door, the son, Benny, looked like he tried to fight and the sister, Gabriel, who is Makayla’s mother, is on the floor in the kitchen. No sign of robbery, no forced entry, both doors were unlocked.

Atwater has some information on Benny, he has quite the social media presence, he is the enforcer for a gang for the past two years and has a lot of enemies with over a hundred death threats online. Voight says that if this was a gang hit, the streets will know.

DCFS is there, Makayla has no other family and there was no father’s name on the birth certificate. Voight would like to question her, but Burgess was her first contact and DCFS tells her that she should do it. Platt is in the room and Burgess asks her how she is going to make Makayla feel safe, she says she doesn’t know. Platt leaves and Burgess asks some questions, but the little girl is coloring and not answering. Burgess opens a sandwich and starts taking off the crust, Makayla does the same, then they both eat.

Upton and Halstead speak to one of their contacts, the streets are saying that a south side hustler killed the Ward family, his name is True. Benny got into it with him and few weeks ago. True has an open warrant for aggravated battery and he made death threats to Benny online. They find True who makes a run for it, Halstead takes him down and cuffs him.

Upton and Halstead are interrogating True, he won’t talk and says he has a lawyer. Voight doesn’t care if True is not talking, he looks guilty and they need to find out more info. Ruzek tells Voight that family services is going to try and relocate Makayla. The package that Upton got is a job offer in New York.

Burgess is at Makayla’s house, she gathers some of her belongings. At the station, Burgess shows Makayla what she took from her home, one of the things is her mom’s sweater and she tells her that maybe she would like to wear it. Burgess introduces her to the woman at DCFS and tells them they have a nice home for to stay at. Makayla hides behind Burgess. At the home, Burgess walks Makayla to her room, places all her stuffed animals at the end of the bed and tells her it is ok to be scared, she has been scared before too.

She says there was a time a few months ago, she was doing her job and somebody scared her. Makayla says she ran and a woman ran after her, she was looking for her. Makayla asks if she can go to sleep, Burgess says yes and she will return to tuck her in. All of a sudden, the power goes off in the house, Makayla’s window is smashed in her room but she is fine. Someone shoots from the front door, Burgess has her gun pointed at it and tells Makayla to go in the bathroom, in the bathtub with her foster parent.

An black SUV was seen leaving the seen, but it was lost. Burgess saw two offenders, they were there for Makayla who finally started talking. Burgess says that Makalya is staying with her, DCFS says that it is not protocol, Burgess doesn’t care. At Burgess’ house, Ruzek is there too. Burgess says it is bed time, but Makayla doesn’t want her to leave. They both sit down at the foot of the bed.

The next day at the station, Halstead tells True that he had motive. True says he would never step foot in that house. Upton shows True the photos of the whole Ward family being killed and Makayla, she wants to know why he would not step foot in that house. He tells them that Makayla is protected, if he goes near her he is dead. And, a gangster named Turique is her father. Turique and Gabriel dated briefly. They found the female accomplance, Nia Benson, girl from the neighborhood, she started visiting Turique in prison a year ago, and she has a black SUV. Vought tells Ruzek to go get her.

Makayla tells Burgess that the women told her to come out, her daddy was there to take her home.

Nia is in the station, Voight is interrogating her. He asks where Turique is and she says she doesn’t know. She says it is not what he thinks, Turique was going crazy, he put a gun to her head and told her that he would kill her if she didn’t drive him, she didn’t get out of the car. Voight says he got her phone, read her texts and he knows her plan. She wanted a perfect family, with a child. So they went into Turique’s ex-girlfriend’s house and killed everyone to have Makayla. She says she never left the car and she doesn’t know where he is.

Makayla is at the station, she hears Nia’s voice and starts to freak out. Burgess takes her out of there and later tells Voight that the child cannot be involved because it is too traumatic for her.

Burgess goes in to interrogate Nia, Voight tells her to make it air tight. Burgess tells Nia that the witness id’d her from the lineup. They say her enter the Ward home, exit the Ward home and call out the girl’s name, they also found her DNA on the scene and some in her SUV. A lot of evidence, more than they hoped for and they will charge her. She tells her that the only way to help herself is to tell them where Turique is. Nia says she doesn’t believe her. Burgess tells her that she doesn’t need her cooperation, she came in there because she was obligated to. Burgess gets up to leave, she tells Nia that she will be booked and transferred out of state to India in the morning. Nia breaks, she says she will tell them everything but they have to say she helped the case.

The team is out and they are ready to get Turique, they see him come out of a building. They move in, he says she was his baby and they took her from him. Burgess tells him to toss the gun and he still has a little girl, or he is going to be dead and bleeding out on the ground. Once they cuff him, Tarique says to Burgess that he is never going to see his daughter, she says she certainly hopes not.

A cousin of Makayla’s picks her up at the station.

Halstead asks Upton what she was offered, she tells him and it is more pay. He says it is a good job for a good cop. She tells him that he can tell her that he doesn’t want her to take it. He tells her that he wants her to do whatever she wants to do. She says she doesn’t want to take it because of him. She is better with him as her partner, 21, Voight; she knows she is better there so she is not going to take it. Halstead kisses her.