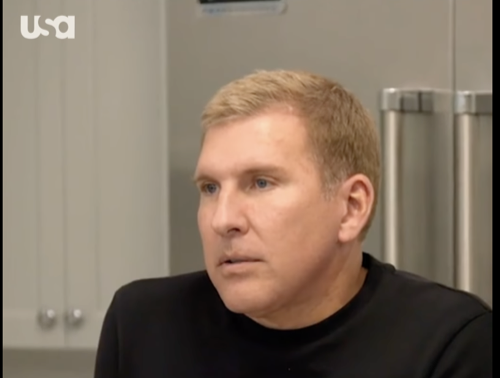 The Chrisleys are back for an all-new season. Grayson is so tall now. He’s taller than his older brother Chase and so now they use that to all mock Chase. Chase hates it. He especially hates that his baby brother is now taller than him and so that just made the mocking more fun for everyone else. Grayson’s voice has also gotten deeper. He’s now working out with his older siblings and so Chase tried to get one-up on him during the workout. He wanted Grayson to tire himself out. Only Grayson is younger and has more energy. He easily kept up with Chase and poor Chase was too silly not to realize he had a Napoleon complex. He actually didn’t even know who Napoleon was. He forgot that party of history.

Chase and Grayson were competing while Todd was inspiring his granddaughter. Todd, as many remember, loves his botox. He loves it so much that the doctor comes to the house to treat him and so his granddaughter saw one of his treatments. She was doing her homework. She was told to write a fairytale for class and she took inspiration from her grandfather. She wrote a story called “the Botox Monster”. It was all about Todd. His addiction to botox made him a monster and that’s why he loved needles so much. Chloe was just a little girl. She was still afraid of needles which is a health fair and so she thought there must be something wrong with her grandfather for willingly injecting himself.

Chloe wrote the story. She was inspired by what she witnessed first-hand and now Todd was distraught. He didn’t want to be the monster in her story. He wanted to be the prince. He was so upset that his mother said that was the most emotion she saw in his face in a long time. She also suggested he get more botox now because his old ones wore off. Todd was upset, though. He went about trying to move to Chloe that he wasn’t the monster and so he treated Chloe with everything possible. He treated her to a generous breakfast. He also told her that he was taking her shopping and Grayson asked if he could get it on that. And Todd told him “no” because it was just for Chloe. Chloe was more than a granddaughter.

Chloe was another daughter. She called Todd “dad” and Todd refers to her as his daughter. Todd has been the male figure in her life. His son Kyle who is Chloe’s biological wasn’t really around and so Todd stepped up. He teaches Chloe. He inspires Chloe. He loves Chloe. He also really didn’t want to be the monster and he did everything possible to get Chloe to change her mind. He even treated her to a spa day. Todd put on an expensive facial mask and it had looked scary to Chloe and so she called him “the Botox Monster” again as she ran out of the room. Todd would have gone after her but he didn’t want to waste the expensive mask so he finished treating himself to the spa day. Todd loves his pampering.

It is who he is. He wasn’t going to change anytime soon and so maybe he should get used to being “the Botox Monster”. Meanwhile, Chase finally found something he’s better at than his brother. Chase can talk to girls and Grayson was still shy around them. Grayson was fourteen despite being super tall. He was still a baby in many ways and he didn’t like his brother embarrassing him in front of a pretty woman. He told his parents. His parents talked to Chase and they told him if he hates the teasing now then why then repeat it with his brother. Grayson will have plenty of time to speak to the opposite sex. Right now, he’s just a kid. Chase realized that and he promised to ease up on him. he also talked his family into easing the teasing on himself.

Chase is insecure about his height. Chloe called her grandfather by that name because she thought she would have to get botox and she was afraid of needles. Once she was reassured that she didn’t have to get the medical procedure, she stopped viewing her grandfather as “the Botox Monster”.

Chase gave Grayson’s woman advice and the next time Grayson spoke to the barista.