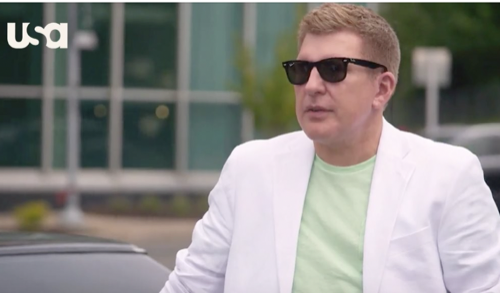 In tonight’s episode of Chrisley Knows Best, Savannah was perhaps not the best driver in the family. She has gotten into a few accidents. But someone parked a strange car in her driveway and she was blocked in. She couldn’t get out. She also didn’t know who owned the strange car. Savannah was getting work done on her car and so Chase suggested it might belong to one of the workmen. They asked around.

They couldn’t find anyone to claim the car and they therefore did what they was best. They had it towed. They got rid of the car only to find out later that the car belonged to their father Todd. Todd bought the car as part of a surprise gift for their mother Julie. Julie and Todd were celebrating their twenty-fifth anniversary. And that car was a replica of the same car Julie drove back when they were dating.

Todd even said that Chase was conceived in the back of the original. Todd wanted to do something special because the anniversary he planned for their twentieth had been a bust. They had a vow renewal after driving for hours on an ATV and so they didn’t have on any makeup or nice clothes.

Julie hated the pictures of that day. She thought she looked horrible. Julie also asked Todd not to do anything too big for this anniversary and Todd said he wouldn’t. Then he found the car that was the exact replica Julie used to drive. He said it was just start of the surprise and so he really did go to pick up the car from where it was towed. And he made sure his kids went with them because it was their fault.

The kids trek through a junkyard. They got mosquitoes bites and were warned about snakes. They also had to pay to get the car back. After all of that, the kids were still a part of the anniversary surprise. They drove their mother to meet up with their dad. Their dad was wearing his vintage clothes from when they were dating and he picked her up in the replica car. They drove off as the kids remained behind.

The kids had a bigger problem on their hands. They had to deal with Nanny Faye. Their grandmother hosted a protest outside of a coffee bar because she thought the shop was being discriminatory towards old people. She thought the store was allowing to cut in front of her. She spoke about it with her son. And he told her that she should speak to the manager.

Faye chose to skip the part to go straight to protesting. She and her friends were protesting when someone from the coffee shop came out to address the situation. Faye told the employee what happened. But the employee told her that they have an app. The people coming to the counter to pick up their orders had already ordered their drinks from the app and paid for it. Its why they were able to go straight to the counter to pick up their orders.

Faye went “ohh”. She then said she needed to get an app and so she was finally coming around to the idea of technology. Faye has resisted technology so far. She didn’t want to find out about apps and she was just now using email. She tried to respond to emails that said No Reply. And the app world was just something else she has to figure out.

Faye was learning the app when Todd brought Julie to the lakeside to have dinner. They used to eat by the lake all the time and so Todd really did scale things back for their twenty-fifth. There was a mariachi band but that was scale down for Todd.