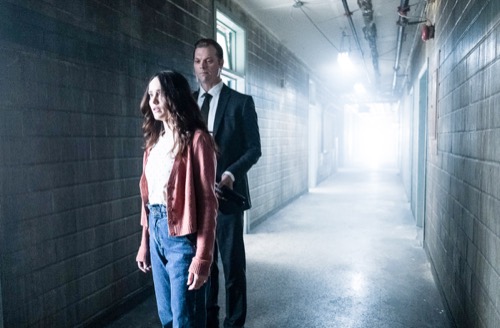 Tonight on CBS Clarice returns with an all-new Thursday, June 24, 2021 episode and we have your Clarice recap below.  In tonight’s Clarice season 1 episode 13 “Family Is Freedom” as per the NBC synopsis, “On the heels of ViCAP uncovering Alastor’s secrets, Clarice is imprisoned in an animal testing facility where she finds trafficked women being held captive.

ViCAP and Ardelia team up to locate Clarice as she attempts to break from her captors in a race to rescue the other women.”

Tonight’s Clarice season 1 episode 12 looks like it is going to be great and you won’t want to miss it. So make sure to bookmark this spot and come back from 10 PM – 11 PM ET for our Clarice recap.  While you wait for the recap make sure to check out all our Clarice recaps, spoilers, news & more!

In tonight’s Clarice finale episode, the episode begins with Tyson Conway, who drops by Clarice’s apartment. Once inside, he asks her if she is still an agent, she says she doesn’t know who she is.

Vicap is discussing Conway, he is clean, he has domestics, no assaults and he is not in his father’s will.

Clarice asks Tyson why she is there, he says because they saw each other. Just then, Clarice sees a message to call in to point asap and she ignores it. He then says maybe because he could see that she is still holding on to things about her father. She remembers the truth about her father, she says she thought he was the best man she ever knew, but then he wasn’t. He was a criminal and a coward, and he betrayed them. She built her life on him and now she has to choose who she is going to be for herself. He puts a necklace in her hands and tells her the chain is broken.

He then says he has to choose too, his father has a code and he has internalized it to some extent. She gets another message, “Tyson + Suspect.” He tells her that whatever happens next, he saw her. Clarice gets up quickly and bolts to the door, she opens it and two men are there. Clarice tries to fight them, but they are too much for her – she drops the necklace and the two men gag her with duct tape, then we see them wheeling her down a hallway on a stretcher.

Shaan and Ardella show up at Clarice’s apartment, she is not there but Ardella finds the necklace on the floor and she says Clarice wouldn’t leave it, this is a signal. Clarice is being held in an animal testing facility, she is in a cell with a woman, Raisa, in the one beside her. They start talking, she says they are all med students being held captive – they are there to get pregnant. Tyson goes to get Clarice, he tells her to follow him out of her cell.

Vicap is going over a file about Nils Hagen, Tomas has a lead on where Clarice could be.

Clarice is brought into a room, Nils is there, she tells him that he ordered the murder of three women to hide fraudulent clinical trials. He says that was just business, those women, they were bad for Reprisol. He tells Tyson that he loves him but never had cause to worry until this – this girl (Clarice) is here for him, to kill, to prove that he is there for him – he slides a gun on the edge of his desk.

At Alastor Research Facility, Vicap is there and ready to go in. Ruth gives Krendler the ok to go in without a warrant.

His father tells him a story about testing children’s gas masks when he was younger, they knew it could be fatal, his little brother was born with a genetic malformation – his father loved him, he could not choose. He became himself then, he was conceived in that moment. Clarice calls him a frightened child; he wants to rewrite what has already been written. Tyson says he can keep Clarice, she is smart, she is strong. Clarice hears a commotion outside. Clarice asks Tyson where the children are. One of the security comes in and tells Tyson and his father there is a way out, but they don’t want to leave without the children. When the security guard says to forget the children, Tyson’s father shoots him.

This gives Clarice time to jump him and get out of there. Clarice goes into another room where she finds fetuses’ in jars, Tyson and his father walk in, his father says “meet my children.” Clarice says it must have killed him to see every time he tries to have a child it goes wrong, just like his brother. He calls her a lying whore like Tyson’s mother. Clarice says Tyson’s mother was one of these women, he killed his mother. Tyson has the gun and he is pointing it at Clarice. Krendler is in the building, one of the women locked up there attacks him., Ardella is there and she pulls the girl off him. In the other room, Tyson shoots his father, he falls back onto the glass shelves that were holding the jars and everything smashes to the floor.

Ardella calls Vicap and tells them Krendler is down, he was shot. Some of the women come running out of the building as Shaan and Murray are on their way in.

Tyson tells Clarice that he still has two bullets, he asks her if there is a chance for him. She tells him that he can put his burden down. He asks her if she saw him, she says no, he was in her blind spot, but she sees him now. He shoots himself.

Krendler is brought out on a stretcher. Clarice is outside, Tomas sees her and she looks like she is relieved.

Krendler is in the hospital, he is in critical condition, the next few hours are important. On the news, they are talking about the murders and Nils Hagen. Tomas is at the end of Krendler’s bed, he says a prayer. Ruth is holding a press conference.

Clarice goes to see Catherine, Clarice says she hasn’t seen her mother since she was ten, she sent her away from home. She has been mad at her for so long, but she was just trying to protect her. Catherine goes over and hugs Clarice.

Ardella is put on administrative leave, she says she is more interested in protecting the people or is it just because she is black.

Tomas tells Murray that he coerced the witness to find Clarice’s location, and he filed a full report. He made a choice, and he is going to live with it.

Clarice buys herself a used car, packs up some stuff, and is about to leave when Ardella gives her the necklace, she had it fixed, added a bead for them, it led her to her. Clarice hugs her. Clarice leaves, she is on the road. She goes back home, she has the necklace on, knocks on the door. Her mother answers the door.