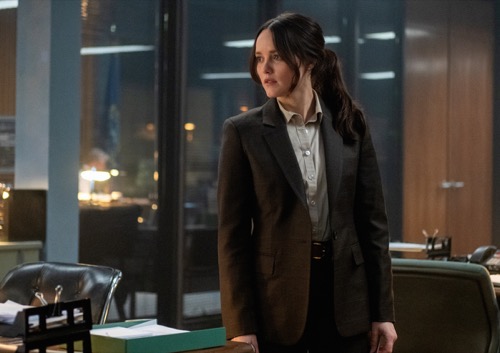 Tonight on CBS Clarice returns with an all-new Thursday, April 8, 2021 episode and we have your Clarice recap below.  In tonight’s Clarice season 1 episode 7 “Ugly Truth,” as per the NBC synopsis, “Clarice and Ardelia team up to investigate a deeply twisted cold case after the body of a missing teenager is found entombed in concrete; Clarice wrestles with the knowledge that Krendler may know the man who attacked her while she was held captive.”

Tonight’s Clarice season 1 episode 7 looks like it is going to be great and you won’t want to miss it. So make sure to bookmark this spot and come back from 10 PM – 11 PM ET for our Clarice recap.  While you wait for the recap make sure to check out all our Clarice recaps, spoilers, news & more!

In tonight’s episode of Clarice, nearly ten months after going missing, the body of fourteen-year-old Cody Phelps was found. His body was stashed in a wall at an empty house and the house was purchased. The new homeowners were doing renovations when some air got into Cody’s tomb. The air was followed by flies and an exterminator was called because everyone assumed a dead animal had gotten into the walls. But it wasn’t an animal.

It was Cody and his name was known to the FBI. Cody didn’t just go missing. He was reported as abduction and there was a nationwide hunt for him as well as the person who took him. It seems he had been killed not long after he had been kidnapped. His remains indicated he’s been in the wall for the full ten months and it was up to the FBI to inform the family.

Cody was the man of the family. He grew up in a single-parent home with both his mother and younger sister. It was his mother who identified the body. She had to be told that he didn’t appear to suffer before she could see him and even then she broke into tears. Cody’s family had held out hope that he was still alive. With him now confirmed dead, the FBI and VICAP were able to run tests on the body. They found a stranger’s DNA.

The DNA was a match to a similar crime scene in which another young teenage boy had been murdered and so that told the specialists they were looking for a pro. Someone whose done this before. Someone who will do this again if he wasn’t stopped. Ardella found the connection.

Ardella informed Krendler. She told him the previous victim was identified as Bobby Larkin and he too was found entombed in the walls of an abandoned house, but there were discrepancies. The two victims were of different races. They lived miles apart. There was also the fact that the DNA match was a mitochondrial match as in the DNA could be two different people albeit related. Ardella wanted in on the case.

She found Bobby’s old file and she wanted to be included in the perpetrator’s capture. Krendler wasn’t too sure about including her. He didn’t want to deal with a turf war and he had his hands full with Clarice. Clarice finally identified the man with Marilyn. His name is Joe Hudlin and Clarice identified him from a photo she saw of him in Krendler’s office.

Krendler told her Hudlin couldn’t be their guy. Hudlin was Krendler’s new divorce attorney and he comes from a big firm. Krendler told Clarice she must be confused. Only she was sure. She knew she saw Hudlin and that she asked him for help and he hit her. She hadn’t been able to remember his face before now.

She had been drugged and so she was a little confused at the beginning except things were different now. She recalls more and more. She knows Hudlin was there and, if Krendler wasn’t going to do anything about it, she was. She told Ardella what happened. She also added that Krendler didn’t believe her and he asking her if she found a new therapist yet. She hasn’t. She’s still looking but she knows she’s not crazy.

Clarice benched her suspicions about Hudlin. She focused on the case and so she and Ardella visited Bobby’s family. They told his mother that DNA has come up. They asked for her and her family to give a DNA sample so that they could rule them out. The mother hadn’t minded. Her brother on the other hand was more difficult.

Bobby’s uncle said the police never looked for his nephew and they didn’t investigate his death. The police claimed Bobby must have been selling drugs out of the house. The police in the area were also known to rough up the little black boys to “teach” them a lesson and so the uncle had thought it was one of them that killed Bobby. It wasn’t until Ardella and Clarice came around asking questions that anyone ever bothered to investigate what happened to Bobby.

Ardella was near the area. She knows what it was like for the black community when a few miles away there was a vigil for a white boy and so Ardella knew how unfair as well as unjust that justice can be. She and Clarice had a fun night with Ardella’s grandma who came for a visit. Her grandma reminded Ardella to visit her father.

Her father had some kind of accident and now he’s unable to respond, but Ardella was told to go see him anyway because he could still hear people and he wants to hear his own daughter. Ardella and Clarice were later talking about their fathers when the DNA results came in. There was a match. A friend of the Larkin family, Marybeth Kern, had agreed to give her DNA and the match indicated someone in her family killed the boys.

Marybeth Kern got married young. It was a shotgun wedding because she had been pregnant at the time and she gave birth to Gerry Junior a few months later. It was mitochondrial DNA. This means it was her son’s DNA found at the scene and the two agents needed to speak with him. Gerry Junior disappeared a few years ago.

He went with his father when his parents broke up and that was the last his mother had ever seen him or so she claimed. Clarice asked to use Marybeth’s bathroom. She did so in the guise of looking for Junior’s things and she found them. She found his bathroom that had recently been slept in. She also found pictures of him with his mother and Clarice recognized him. He was the one posing as Marybeth’s husband.

Marybeth is apparently a serial abuser. She’s been molesting her son since his father left when he was fourteen and it never stopped. She told him he needed to fill her needs now that he drove away from her husband. Jerry was worried the same could be happening to both Bobby and Cody who were themselves called the man of the house.

Junior, therefore, killed them in a bid to protect them and his secret. He had to talk to someone about the abuse. He told them because they would understand and they hadn’t. Both boys weren’t abused. Their mothers loved them as mothers should and so they didn’t understand Gerry Junior’s position. They probably just thought it was sick.

Both Junior and his mother were arrested. The case was closed and that worked out great for VICAP because they were all so glad for Murray to return to normal. Murray took a child abduction to heart. Murray was sixteen and his sister was thirteen when she was grabbed from their front yard. He had been inside when it happened.

Shaan followed Hudlin. He saw him go into Lockyer Labs and so he knows he’s connected to the River Murders. But when they informed Krendler, Krendler told them to stand down. He claimed they didn’t have enough evidence and that they should let it go. He didn’t tell that Hudlin is blackmailing him. Hudlin knows someone falsified the autopsy of their suspect. He told Krendler that either the case against the labs was dropped or he personally makes sure Krendler went to prison. And that would in effect cost him his kids.

Krendler couldn’t risk that because his ex-wife is an alcoholic and she couldn’t be trusted with their children.