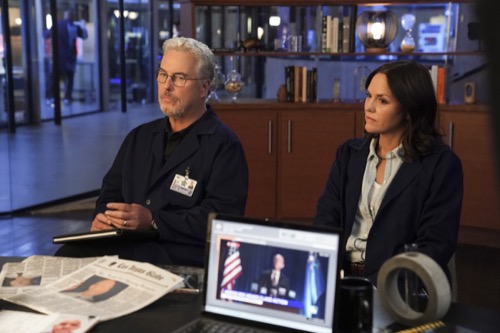 Tonight on CBS CSI: Vegas premieres with an all-new Wednesday, November 10, season 1 episode 6 called, “Funhouse” and we have your weekly recap below. In tonight’s CSI: Vegas episode as per the CBS synopsis, “Max puts CSI on lockdown when evidence in a new murder tips Grissom and Sara to a new suspect in the crime lab. Also, Folsom and Allie investigate a series of chilling killings at a dilapidated clown-themed hotel.”

Tonight’s season 1 episode 6 looks like it is going to be great and you won’t want to miss it, so be sure to tune in for our live coverage of CBS’s CSI: Vegas recap at 10:00 PM EST! While you wait for our recap hit the comments and let us know how excited you are so far with this season.

In tonight’s CSI Vegas, a clown was murdered at a funhouse. However, the clown wasn’t really a clown. It was a woman forced to put on clown makeup and she messed it up with her tears. Her throat was also slashed afterward and the killer stitched it up with blue shoelaces. The junior members of the Crime Lab were investigating this murder when the breach occurred. The breach at the Crime Lab. The person who murdered Martin Kline and who is trying to frame David Hodges for manufacturing evidence had left behind DNA at a crime scene. He or she cleaned it up with help from a luminol bottle. The luminol could only have come from the Crime Lab itself because of its unique genetic makeup and so that meant someone from the Crime Lab killed Martin Kline. And that someone was dangerous.

Roby ordered that the Crime Lab go on lockdown. She did so before being made aware that several armed weapons were missing from their arsenal. One of them was a grenade and that this meant the killer could be locked in with them with a weapon. Roby tried to hide that fact in case it pushed the killer into doing some drastic. But Detective Nora Cross has been made aware of the secret investigation as well as the lab breach. She even knew about the missing weapons. Cross was naturally upset with Roby. She believes she should have been made aware of their doubts on the David Hodges case from the very beginning and she also felt she should have been included before Kline’s death.

Roby and Cross checked security cameras. They saw for themselves that the killer was still inside of the building with a grenade and unfortunately they couldn’t see his or her face in security footage. They just knew this person was trapped inside with them. Roby, Cross, Sara, and Grissom were all trying to figure out who the killer was before they could make their move and so they weren’t really answering calls from anyone outside of the lab. Folsom and Allie were still investigating the clown’s death when a second body dropped. The second body belonged to their suspect and so now they knew for a fact he hadn’t killed their previous victim but they didn’t know was abducting people and forcing them to put on clown makeup before killing them.

It turns out the tear stains weren’t tear stains. They were condensation marks as if water was dripping on them and so there’s no telling which came first. The makeup or the killing. The killer also was storing them somewhere cool and that ruined body temperatures. Folsom and Allie sent the bodies in the coroner’s van while they await news of the autopsy. Meanwhile, they went into the funhouse. The second murder at the funhouse at least warranted a look inside and so the team went in. They found the crime scene. They found where the victims were killed. They also found more origami. The killer left origami flowers on the victims and he or she had put together four more of these supposed flowers. And so the killer planned on killing quite a few more people.

Folsom and Allie were without the Crime Lab for this one. They had to make do with random household objects or in their case it was a minifridge. They couldn’t return to the Crime Lab but Roby was getting further in the hunt for the mole. The guy who took the grenade along with other items was someone claiming to run a field check. He said he didn’t sign out the weapons because Roby called an emergency meeting and he dropped everything to hear her out. This guy also had a missing luminol bottle. Park said his bottle disappeared after he was clearing out a crime scene and that he had even taken the police to task for not closing the area off to pedestrians. Sara and Grissom investigated that story. And they found out to be somewhat true.

Park’s luminol was taken at a crime scene. They ran several tests indicating that he left the bottle in the backseat of a crime scene and that the killer must have gone in there looking for it. They found dandruff on the floor that belonged to the killer. Sara ran a DNA analysis on dandruff. She later went running to Grissom to tell him she knew who was behind everything and she said it was Anson Winx.

Winx was the lawyer handling the class-action lawsuit against the Las Vegas police force for wrongful imprison and so he was representing all the people that would be released from prison if David Hodges is found guilty of fabricating evidence. At last count, it was eight thousand people at risk of being released and so Winx put this all in motion in order to get rich quickly. He was going to make a lot of money off of those lawsuits.

It was to the team to stop him. They were collecting evidence against him and they needed to do so fast. The killer in the clown murders was a man forced to do so by another in prison. The prison guy was getting out soon because of David Hodges’s case and so he began sending threatening letters. He told people he knew where their families were. He also told them to do his bidding or their family will die first and so that’s what happened. Two people died. Two people were arrested. But they at least found evidence to keep this one particular guy behind bars.