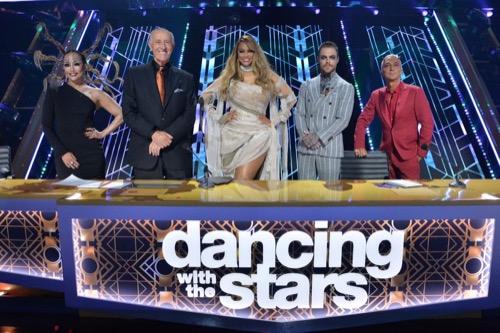 Tonight on ABC the glitz and the glimmer finally return to the ballroom as Dancing With The Stars when season 30 episode 9 of DWTS airs! We have your all-new Tuesday, November 8, 2021, season 30 episode 9 Dancing With The Stars recap below! On tonight’s DWTS Season 30 episode 9 “Janet Jackson Night,” as per the ABC synopsis, “Lights, camera, Janet! This season’s eight remaining couples return to the ballroom for a star-studded Janet Jackson Night. There will also be a double elimination as the couples battle it out to make it into next week’s semifinals.

This week, the show will feature an opening number to “Nasty” by Janet Jackson, complete with a Tyra walkout. There will also be a special DWTS tour performance to “What Have You Done for Me Lately.”

Judges Comments: Len: “There were one or two heel leads and you shouldn’t do that, but this was a nice dance and a nice routine, but is nice good enough to get you into next week, I’m not sure.” Derek: “You kill me with the sparkles, you have had some amazing performances, this was a good performance but it wasn’t your best. When you partnered up it got a little stiff, every week can’t be great.” Bruno: “Fun, playful, I have to say your fluidity has improved but no heel leads in the cha cha cha.” Carrie Ann: “You bring the fun, you make us smile. But in the quarter finals we are looking for the details. You were too casual and keep your rib cage in.”

Judges Comments: Derek: “New hair, new confidence, yes. You were so vibrant, you had this beautiful energy, so magnetic, so smooth. A Samba is a tough one and you did it beautifully, so gracefully.” Bruno: “I see you for the first time in HD, you were brilliant. 100% authentic Samba.” Carrie Ann: “I am so proud of you, we have all been waiting for this, fantastic.” Len: “If I were a doctor giving your samba a health check, it would get a one.”

Judges Comments: Bruno: “The queen of mean, ferocious, furious, you were spinning like a whirlwind. I have to say the key to the paso doble is artistry, it was there with the beauty. Absolutely wonderful.” Carrie Ann: “Often times women in their fifties can’t compete, you are kicking the ball out of this ballroom dance competition. Amazing, it was powerful, passionate, so proud of you, well done.” Len: “Suddenly you are aggressive, you’ve got attack, love the skirt, well done, great performance.” Derek: “You came out and slayed that paso, I could go on and on, you are amazing.”

Judges Comments: Carrie Ann: “It was a beautiful performance, so elegant and so refined but I would have liked to see a little more heat. In your next dance, through that in.” Len: “I loved the chemistry, the interaction, it had moments of speed. I am never keen on a table.” Derek: “I love that could be dancing anything and you are smiling, so authentic, a beautiful dance.” Bruno: “Seductive, romantic, great leg work, we just need a little more passion but you are an Argentine beauty.”

Judges Comments: Len: “It was big, bold and no nonsense dancing, full of fire. I got to be honest, I didn’t even see you Cheryl, it is a man’s dance and Cody danced is fantastic.” Derek: “I feel like a switch went off, you have been stepping it up, your lines, your power, your presence, well done.” Bruno: “You unleashed the beast within. You were going at it like an executioner.” Carrie Ann: “It was fantastic, you are probably bringing it all together.”

Judges Comments: Derek: Oh my goodness, you were just a leading lady from start to finish. Those lifts were difficult, you were insane. That was incredible.” Bruno: You were in charge of this dance from beginning to end, absolutely leading it and what you did, you had all the Janet Jackson references but you made it your own. It’s your dance.” Carrie Ann: (she gets up and hugs Amanda) I am so proud of you.” Len: “Amanda, amazing.”

Judges Comments: Bruno: “Respect, taking on one of the most iconic ground breaking numbers ever, it was a great tribute to a great artist. The cha cha cha was minimal but the performance outstanding.” Carrie Ann: Intricate choreography, fantastic.” Len: “I was impressed in the group section of that dance, it was right on point. It had its moments as a cha cha cha, but for me, not enough of them.” Derek: “You are both special, I feel what is important is to be memorable and that was a very memorable performance.”

Judges Comments: Carrie Ann: “That was amazing, what an incredible Janet night. This is the most intense competition we have ever seen on the show and a lot of it has to do with you. That was sharp, hot and sexy.” Len: “JoJo you are an excellent dancer, the two of you make a fantastic dream team. For me, there were one or two gimmicks that I didn’t think were salsa.” Derek: “You are such a great partner, that was just, I’m speechless.” Bruno: “Drop dead sexy. You dare to go there, you put things that push it as far as you can, you have courage and I admire that.”

Time for some results, in no particular order, below are the bottom three:

Olivia Jade and Val Chmerkovskiy, Jimmie Allen and Emma Slater, Melora Hardin and Artem Chigvintsev are in the bottom three.

The couple with the lowest combined total of judges scores and viewers votes will be leaving the competition.

Again, it is going to be up to the judges to save the next couple.