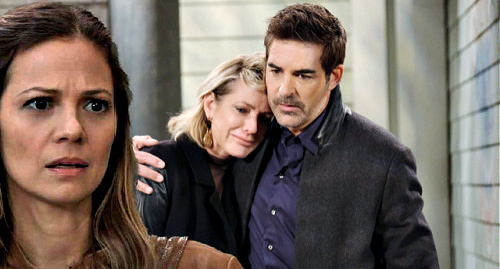 DOOL fans know Ava has already been worried about Nicole and Rafe possibly having more than friendly feelings for each other. However, the fact that Nicole was married always served as a barrier on both sides.

Nicole slipped up big time when she slept with Xander Cook Kiriakis (Paul Telfer), but she truly wanted to stay faithful.

Likewise, Rafe didn’t want to cross any lines and create additional problems in Nicole’s marriage. He knew the whole long-distance thing was already taking a toll, so Rafe wasn’t interested in adding to the strain.

Nevertheless, Nicole decided Eric was better off without her after the anniversary party blowup. She pushed for a split and will need some comfort during the week of August 9-13.

Days spoilers say Nicole will open up about what went down and admit her marriage is over. That’ll leave Rafe feeling sympathetic and eager to pull Nicole into a hug.

Once Rafe finds out a divorce is happening, it could bring dangerous temptation. That goes for Nicole as well since she won’t feel obligated to stay loyal to Eric anymore. Now it’ll just be a matter of staying loyal to Ava as her friend!

Nicole won’t want to hurt Ava, but there’s no denying the spark between Nicole and Rafe. Ava will get a glimpse of it for herself when she stumbles upon this close moment.

Days spoilers hint that Ava will reel over the sight of HER man holding another woman – particularly a woman she considers a close pal.

This could set up quite a rivalry for Nicole and Ava moving forward, so Nicole had better be careful. Rafe should also be wary since Ava’s been known to do some wild things when she gets obsessed.

If Ava has become more infatuated with Rafe than he realizes, major drama could be headed his way.

For now, Ava will merely be jealous and concerned, but she could take drastic action if she fears she’s going to lose Rafe to Nicole.