Days of Our Lives Spoilers: Brady Wakes Up Covered in Philip’s Blood – Knife Found at the Riverbank 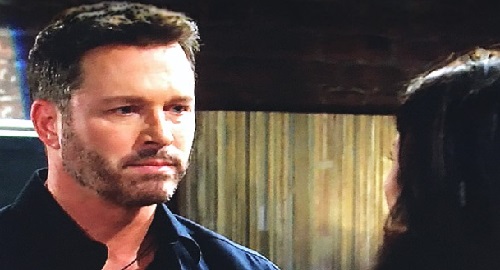 Days of Our Lives (DOOL) spoilers tease that Brady Black (Eric Martsolf) will wake up covered in Philip Kiriakis’ (Jay Kenneth Johnson) blood – and a knife will be found next to him on the riverbank. Brady will have no memory of how he ended up there and certainly won’t know why his clothes are a bloody mess.

Chloe Lane (Nadia Bjorlin) will be the one who first stumbles across this shocking sight, so she’ll wonder what the heck is going on. Brady will stir awake and try to piece together recent events, but he’ll have a couple things working against him.

For starters, Brady just took quite a blow to the head thanks to Philip’s attack. Once Brady is hospitalized, Kayla Johnson (Mary Beth Evans) will run some tests and uncover another shocker. Brady’s lab work will show he’s intoxicated despite no memory of drinking at all.

Days spoilers say Brady will protest since this just won’t make any sense. He won’t think he would’ve thrown away his sobriety like that, but his lab work will prove otherwise. To make matters worse, the blood on Brady’s clothes will ultimately be deemed a match for Philip’s blood type.

DOOL fans can expect Chloe to try giving Philip a call, but that’ll bring another horrifying realization. Chloe will hear Philip’s phone ringing and determine that it somehow ended up in Brady’s pocket. Of course, Brady will once again be clueless and will assure Chloe that he doesn’t understand any of this at all.

On top of all that, Philip’s artificial leg will be found in the river following a thorough investigation. DA Melinda Trask (Tina Huang) will no doubt call for Brady’s arrest since all the clues will add up. Trask is always happy to throw another Salemite behind bars, so she’ll be eager to plop Brady in a cell.

However, there’s a reason why none of this will seem right to Brady. It’s because Brady didn’t really kill Philip. In fact, Days spoilers say Philip won’t be dead at all. All signs point to Philip framing Brady as part of his payback plot, so this vengeful Kiriakis has really gone off the rails!