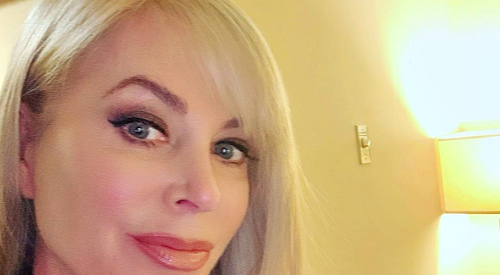 Days of Our Lives spoilers confirm that Eileen Davidson is joining the Peacock spin-off, Beyond Salem. As longtime fans remember, she played Kristen DiMera and Susan Banks prior to Stacy Haiduk taking over the roles. Other cast members’ roles have been announced but Davidson’s has not been released. Could this secrecy suggest she is taking on a brand new character?

DOOL spoilers reveal that Beyond Salem was just announced a few days ago but there is already a lot of hype about it. A lot of money, time and resources are being pointed at the spin-off. There were a handful of names confirmed to be joining the production.

In the days since then, more names are being attached to the project, including some huge stars. Davidson is one of those big names and it’s interesting she’s joining this project.

Davidson left DOOL and she never indicated wanting to return. We also know that freedom and flexibility are important to her, but so is passion and excitement for the gigs she does accept. Something convinced her to say yes to Beyond Salem even though she said no more DOOL.

Even though Haiduk is only appearing occasionally, she has been open on social media about loving the gig. The past few exits she made sure that fans knew that she will return if asked as long as she’s available. So, that’s another clue that Davidson is probably playing someone other than Kristen and Susan.

Days of Our Lives spoilers reveal that Davidson was confirmed to be part of Beyond Salem. However, her character name was not released. It seems to be a mystery role, which suggests a new character that could be central to the plot.

Some might assume that Davidson is taking back the roles she played before walking away from the NBC soap. That is a possibility but it seems more likely that she’s playing a new character.

Going back to being Kristen and Susan doesn’t sound like it would be enough for her. However, a fascinating new character would be something fresh and exciting.

Actors are just like everyone else — they like variety and don’t like to get bored or stuck in a rut. We will keep you posted on new developments but in the meantime, tell us who you think Davidson is going to play in Beyond Salem.