Days of Our Lives Spoilers: EJ & Chad Battle For Abigail’s Heart – May the Best DiMera Win? 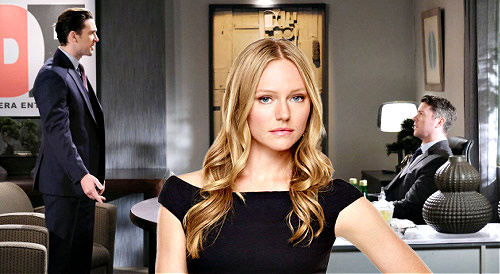 Days of Our Lives (DOOL) spoilers tease that EJ DiMera (Dan Feurriegel) and Chad DiMera’s (Billy Flynn) brother battle may soon be back on. Abigail DiMera’s (Marci Miller) heart will be on the line, so it could be a case of Days letting the best DiMera win!

Despite previously pushing Chad to become DiMera’s CEO again, EJ went after the spot for himself. Chad and EJ compromised by becoming co-CEOs, but it’s clear that they don’t really trust each other.

Days has been careful to keep a bit of a feud in play – like when Chad refused to help EJ woo Johnny DiMera (Carson Boatman) to the family business.

Chad shrugged about how they hadn’t discussed what was in it for him and reminded EJ not to betray him again following the CEO drama.

Of course, that makes it seem like another betrayal is indeed coming – though perhaps not the one Chad expects.

During the week of September 6-10, EJ will push Chad to fight for his wife. He’ll see the potential for Chad to make amends with Abigail and fix what’s broken.

EJ may argue that Abigail’s a good woman unlike Sami Brady DiMera (Alison Sweeney) and urge Chad to hang onto her if at all possible.

Naturally, this is the kind of thing that could set up a love triangle. EJ once had a steamy affair with Abigail, so it wouldn’t be unreasonable for sparks to fly again.

That’d work well with the competition that’s been happening between EJ and Chad lately.

Abigail loves Chad, but she’ll struggle to trust him again after everything that’s happened. She’ll also have a reason to connect with EJ since they both got cheated on in their relationships.

However, EJ had better watch out if he betrays his brother in this way.

If EJ sleeps with Abigail again or is at least tempted to, Chad could resolve to push EJ right off the DiMera throne!

Chad would no doubt like to be the sole CEO anyway, so this could serve as the angry motivation he needs to make it happen.

Whatever the case, Abigail seems poised to land at the center of Chad and EJ’s brewing war.

Days of Our Lives spoilers say some surprises are looming once Abigail returns this September, so be sure to tune in!

CDL will have other terrific Days of Our Lives spoilers, updates and news for you, so make us your one-stop DOOL source.