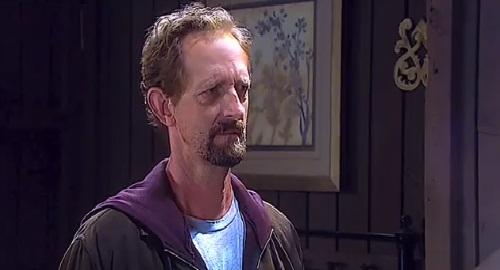 At the cabin on Friday’s Days episode, Ben Weston (Robert Scott Wilson) assured Marlena there was no way John Black (Drake Hogestyn) was at the door. Ben could tell this visitor wasn’t going away and finally opened the door to a hiker in search of water.

Gabriel exchanged introductions with Ben and Ciara Brady Weston (Victoria Konefal), who pointed out that Grandma Caroline used to say a special prayer to Saint Gabriel. That prompted Gabriel to insist his own mother named him for the archangel.

When Gabriel approached Marlena, she asked if John sent him. Marlena scowled as she pointed out you can’t be too careful and clearly wasn’t happy about Gabriel’s presence. Gabriel accepted Ben and Ciara’s offer to stay for lunch, which led to Ciara mentioning something about being pregnant.

After Gabriel congratulated Ciara and asked when the blessed event was, Ciara replied that it wouldn’t be for a few months. Gabriel also complimented Ciara’s necklace, which was meant to summon a guardian angel to watch over the baby. Ciara pointed out Marlena gave it to them, so Gabriel gushed over the thoughtful gift.

While Ben and Ciara were busy making sandwiches, Gabriel stared Marlena down as they had a confrontation using only their thoughts. DOOL fans could hear Gabriel admit that God sent him and that he’d help defeat the devil – just like he did 25 years ago.

Possessed Marlena argued that Gabriel wasn’t allowed to intervene, but he countered that he could let the devil know he was being watched. Gabriel couldn’t warn Ben and Ciara of the threat Marlena posed, but he knew the devil wanted that baby and why. He insisted it wasn’t happening and promised that love would prevail.

Once Marlena and Gabriel wrapped up the silent faceoff, they gathered around the table with Ciara and Ben. Gabriel suggested Marlena should say grace, so she reluctantly said a brief blessing over the meal and looked disgusted.

At the hospital, Steve Johnson (Stephen Nichols) stopped John from bolting from his bed to find Marlena. He pushed John to keep recuperating and revealed how he tracked Marlena down through Johnny DiMera’s (Carson Boatman) clues. John wanted to locate Marlena and thought the key might be finding out what the devil wants.

At home on Friday’s Days episode, Lani Price-Grant (Sal Stowers) cried to Tamara Price (Marilyn McCoo) over the phone. Although Lani understood why Tamara did what she did and appreciated how her fill-in mom had protected her, her heart was still torn apart over all the lies.

Eli Grant (Lamon Archey) came home and comforted Lani before she mentioned her recent visit with Kristen DiMera (Stacy Haiduk). When Eli realized Lani didn’t know about the escape, he offered updates on Kristen never making it back to Statesville.

Lani promised she had nothing to do with Kristen’s getaway, so Eli believed her. They decided to check the townhouse in case Kristen might’ve gone after Rachel Black (Finley Rose Slater), but they only managed to scare the babysitter while Rachel was napping. There was no sign of Kristen or Brady anywhere.

Outside the pub, Philip dragged unconscious Brady Black (Eric Martsolf) away after delivering that blow to the head. Later, Chloe questioned Philip when he finally showed up at the Kiriakis mansion. She wondered where Philip had been and what that weird smell was.

Philip said he was looking for the perfect gift and suggested it was in the trunk. He claimed to have gotten some manure for the tree and wanted to take Chloe for a night on the town since her takeout was getting cold.

Near the river, Philip pretended to be surprised over their tree being ripped out of the ground. He “found” Brady’s inscribed watch and assumed Brady must’ve done this in a jealous rage. Chloe wasn’t buying it, especially since she just saw Brady wearing that watch during their encounter outside the pub.

However, Philip suggested Brady must’ve seen Chloe picking up a romantic dinner for two and flipped out. Chloe argued that Brady was going to take food to John in the hospital and vowed to clear this up, but Philip said he doubted Chloe would find Brady there.

As Chloe dashed off, Philip called out that he was going to report this vandalism to the park service. Once Philip was alone, he ultimately dragged out-cold Brady by the riverbank. “If I can’t have Chloe, you can’t either…you son of a bitch!” Philip snarled as he pulled out a knife.

Chloe popped in John’s room briefly and realized Brady wasn’t there, so she headed back to the riverbank and made a shocking discovery. She saw Brady unconscious with blood on his chest, so she stooped down in a panic and begged Brady to wake up.

Back with John, he grew concerned since Brady wasn’t answering his phone. Steve felt John was worried for no reason and suggested Brady probably just got sidetracked.

Meanwhile, Paulina Price (Jackée Harry) convinced Abe Carver (James Reynolds) to hear her out. After Paulina told Abe she loved him with all her heart and begged for forgiveness, Abe couldn’t give that to her. He promised nothing would change his love for Lani and admitted he still loved Paulina, too.

Even so, Abe couldn’t trust Paulina and wasn’t sure he could put his heart at risk again. He needed time, so Paulina said she’d wait forever and thanked Abe for at least listening to her.