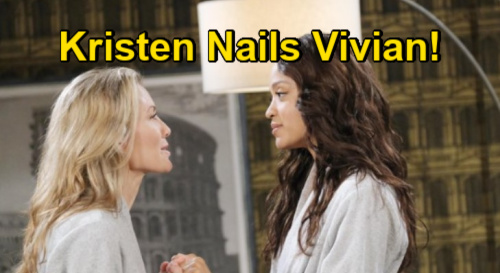 Days of Our Lives (DOOL) spoilers tease that Lani Price-Grant (Sal Stowers) will need some help from her close pal, Kristen DiMera (Stacy Haiduk). DOOL fans know Kristen and Lani’s friendship has led to some tough predicaments for them both.

Kristen confessed to stabbing Victor Kiriakis (John Aniston) after Eli pressured her, but she truly wanted to make sure Lani stayed out of prison and could be there for her family.

Although Eli and Lani finally worked through their Kristen issues, they’ve got a different and much worse problem now that their twins are missing.

During the week of January 25-29, Lani will seek Kristen’s assistance. Kristen will feel horrible about what Lani and Eli are going through since the kidnapping, but she may wonder what she can do from behind bars.

However, Lani might be grateful for any info Kristen can offer about Vivian Alamain (Linda Dano).

By then, Lani may start to suspect Dr. Amanda Raynor (Victoria Platt) had a boss with a reason for revenge. Lani and Eli dismissed the possibility of Vivian being behind this snatching since they believe she’s dead.

However, people come back from the dead frequently in Salem. It may not be long until Lani puts the clues together and realizes Vivian might be running the show here.

Since Vivian was held at the Nashville warehouse, Lani might hope Kristen remembers something that could help. Perhaps Kristen knows a favorite place of Vivian’s where she might be hiding out.

Anything Kristen can offer at all would be beneficial. Lani could use all the help she can get, and Kristen will certainly do whatever she can to reunite “Elani” with their kidnapped babies.

If Kristen really comes through for Lani with a major clue – one that breaks this case wide open – perhaps it could lead to Kristen getting some help in return. Kristen will need it more than ever after she escapes from prison and takes Tony DiMera (Thaao Penghlis) hostage!

Days of Our Lives spoilers say Kristen will be a desperate woman after Brady Black (Eric Martsolf) gets shot. Kristen will make some wild moves, including this escape, hostage situation and threatening to murder Chloe Lane (Nadia Bjorlin).

All of this could certainly rack up serious charges for Kristen and put her behind bars for much longer – maybe even the rest of her life. Lani won’t want to stand by and let that happen to her friend, especially not if Kristen really helps on the plan to find the twins.

Even Eli might put his own issues with Kristen aside if she’s a huge part of why the twins are returned safely.

Will Kristen be spared after Eli and Lani work to free her? If Lani and Eli can work the right angles and pull the right strings, maybe they can find a way for Kristen to cut a deal and reduce her prison sentence drastically.

Days of Our Lives spoilers say Eli and Lani will owe Kristen big time if she comes through on the help they need! It’ll be interesting to see if Lani and Eli can help Kristen out of her own jam and perhaps score her freedom.

Now that Stacy Haiduk is on contract again, it makes sense that there’ll be some light at the end of the tunnel that frees Kristen.

As other Days news and updates emerge, we’ll keep you posted. Days spoilers say some surprising twists and turns are in store, so don’t miss what’s ahead on DOOL. CDL’s where you want to be for the hottest Days of Our Lives spoilers, updates and news, so drop by often.