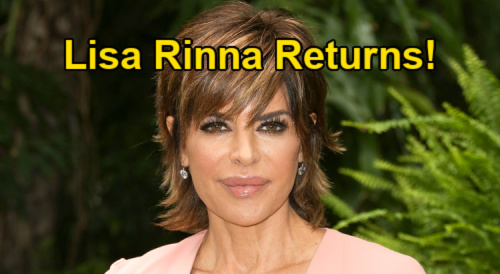 Days of Our Lives (DOOL) spoilers tease that Billie Reed will carry out a stolen jewels search, so look for Lisa Rinna to reprise her role as an ISA agent on a globetrotting treasure hunt. Billie’s comeback will be part of an exciting DOOL miniseries called Days of Our Lives: Beyond Salem, which is set to hit Peacock.

This should serve as a great way to draw interest to the streaming service and let fans see some familiar faces as well. Some other blast-from-the-past characters will pop up as part of this five-episode event, so this should generate some buzz and give viewers some extra content to enjoy.

Although Lisa Rinna isn’t scheduled to air on the main show as of right now, it’ll still be fun to see Billie Reed again on this limited series.

Billie will take center stage since her search for the stolen jewels will be a crucial element in all the other stories.

We’ll see many Salemites travel out of Salem on vacations, romantic getaways, family visits and more. Each story will connect to the treasure theft as well as Billie’s attempt to find it.

The stakes will be high according to Days spoilers, which promise dire consequences for Salem if Billie fails.

Of course, something tells us Billie will indeed discover the jewels she’s seeking. That doesn’t mean there won’t be some backlash that spills over into Salem later, but Billie’s a pro who knows how to get things done.

The stolen gems should be found, but this could still set up some ramifications for Salem depending on who’s after the jewels and why.

It sounds like there could be some dark forces at work to gain control of these precious stones, so there could be a deeper meaning behind them – like the power to curse or control the fates of others.

John Black (Drake Hogestyn) and Marlena Evans (Deidre Hall) will also tie in through a trip to Zurich along with Chad DiMera (Billy Flynn) and his visit to Phoenix.

Paulina Price (Jackee Harry) and her loved ones will even be part of the action through a Miami vacation, so there’ll be a lot going on in this limited series.

Billie will have helpers to pitch in along the way, so this quest to chase the gems should be a real team effort!

As other Days news emerges, we’ll pass along updates. Are you eager to see Lisa Rinna return as Billie Reed on Peacock’s special miniseries?

CDL will have other thrilling Days of Our Lives spoilers, updates and news to check out, so pop back in soon.