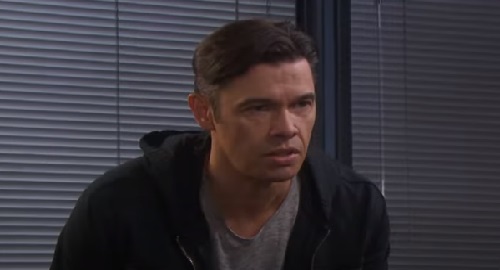 Days of Our Lives (DOOL) spoilers for Monday, December 6, tease that Xander Cook Kiriakis (Paul Telfer) will be accused of helping Kristen DiMera (Stacy Haiduk) escape while Brady Black (Eric Martsolf) gets rushed to the hospital. Here’s what DOOL fans can expect in Monday’s shocking episode.

For starters, Xander will land in trouble with the law again. Days spoilers say Rafe Hernandez (Galen Gering) will haul Xander down to the police station and put him through a grilling session. Xander will face accusations over Kristen’s escape since he showed up just before she made her getaway, but he obviously had nothing to do with it.

While Xander denies being Kristen’s accomplice, Gwen Rizczech (Emily O’Brien) will battle guilt over dragging him into another mess. Since Gwen helped Kristen escape along with Ava Vitali (Tamara Braun), she’ll hate that Xander’s once again dealing with legal drama because of her.

There’s no real evidence against Xander, so Gwen will just have to wait it out and hope all her secrets stay under wraps. In the meantime, Roman Brady (Josh Taylor) will turn on the charm with a lovely evening for Kate Roberts (Lauren Koslow). Kate will enjoy a romantic meal with Roman as they continue to celebrate their reunion.

Roman will close up the pub for this little private party for two, but Rex Brady (Josh Taylor) is set to derail their night anyway. Days spoilers say Rex will surprise Kate and Roman on Tuesday, but the end of Monday’s episode might bring a first glimpse of him.

By the riverbank, Chloe Lane (Nadia Bjorlin) will try to make sense of the disturbing scene in front of her. She just found unconscious Brady with blood on his chest, so she’ll assume Brady has been wounded – at least at first. That’s why Brady will be rushed to the hospital ASAP, but Kayla Johnson (Mary Beth Evans) will determine that he doesn’t have any significant injuries.

Days spoilers say Brady will undergo some tests, so it won’t be long until his lab work comes in. Kayla will find that Brady’s intoxicated – and after Chloe calls Philip Kiriakis’ (Jay Kenneth Johnson) phone, she’ll be stunned to learn it’s in Brady’s pocket.

The blood found on Brady will be a blood type other than his own and will match a bloody knife found at the riverbank as well. Philip has really thought of everything in his extreme scheme to frame his greatest enemy, so Brady’s situation will keep getting worse and worse!

Next, Gabi Hernandez DiMera (Camila Banus) and Jake DiMera (Brandon Barash) will make a pitch for some new jobs. They’ll want to be the co-CEOs of Titan Industries, but they’ll have to convince Victor Kiriakis (John Aniston) to hire them first.