Days of Our Lives Spoilers: Philip Catches Chloe & Brady in Bed Together 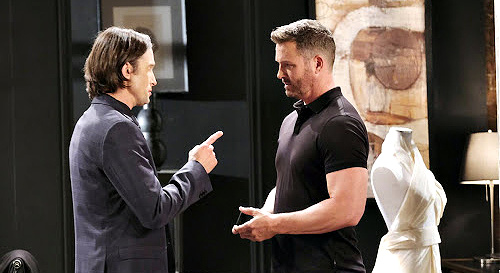 Days of Our Lives (DOOL) spoilers tease that Philip Kiriakis (Jay Kenneth Johnson) will bust Chloe Lane (Nadia Bjorlin) and Brady Black (Eric Martsolf) in bed together, so he’ll blow his top over this scandalous discovery. To set the stage for this shocking sight, let’s discuss the DOOL events leading up to it.

There’ll be some trouble when Brady urges Chloe to come to New York with him. It seems it’ll be a simple business trip as far as Chloe’s concerned, but Philip will be outraged that she’s even considering traveling along with her ex.

Of course, Days spoilers say Chloe will think Philip should lighten up and trust her. She’ll go against his wishes and take the trip anyway, so Philip will seethe and find someone to confide in. It’ll be Belle Brady (Martha Madison) who listens to Philip rant about Brady moving in on Chloe – and Chloe’s willingness to let him.

Belle will sense that Philip’s getting all worked up and may argue that it’s for no reason. Nevertheless, Days spoilers say Philip will grow increasingly worried about what’s going on behind his back. He finally won’t be able to handle his fears and anger any longer, so he’ll be prepared to confront Chloe and Brady.

It looks like Philip will land at Brady and Chloe’s hotel, which will be a problem since there’ll apparently only be one room available. For some added humor, it might even be the honeymoon suite! Whatever the case, Brady and Chloe may have to share a bed as a result of this dilemma.

That could mean things won’t be quite as they seem when Philip busts the pair in a compromising position during the week of August 30-September 3. On the other hand, being in close quarters – particularly in the same bed – might fuel the passion Chloe and Brady are already feeling.

It could mean some lovemaking will actually go down, but it’s also possible this will be a big misunderstanding. Chloe may explain the one bed situation and contend that nothing really happened.

Regardless, it’s all kinds of inappropriate for Chloe to be sharing a bed with her former flame, so Philip will have every right to chew them both out – no matter how far things go or don’t go.

Days of Our Lives spoilers say Philip and Chloe’s relationship will soon be dangling by a thread.

Will this incident be enough to end the latest round of “Phloe” and send Chloe back into Brady’s arms? CDL will have other terrific Days of Our Lives spoilers, updates and news, so make us your one-stop DOOL source.