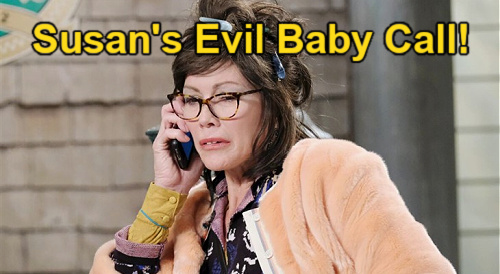 DOOL fans know Susan is a rather kooky character who often has psychic visions and “sees” things that most people can’t.

However, Susan’s instincts tend to be right once the full puzzle comes together. Her visions about Ciara in captivity were confusing to Ben at first, but they made sense in the end.

During the week of November 1-5, Days spoilers say Ciara and Ben will get a visitor they definitely weren’t expecting.

It should be Susan who shows up and warns there’s big trouble brewing since she’s back for November sweeps.

Ciara will know she’s indeed carrying a baby by then through a pregnancy test confirmation. She’ll be on cloud nine with Ben in the aftermath, but Susan will come along to burst their bubble.

Days spoilers say Susan will be unsettled over the evil she senses around this unborn child.

Naturally, Ciara may argue that Susan is nutty and not someone who should be taken seriously. She may remind Ben that they’re going to give this baby a loving home – a far better one than Ben grew up in with abusive Clyde Weston (James Read).

Ciara and Ben have also agreed to watch out for any warning signs and get help for their son or daughter if any disturbing tendencies present themselves.

Even if Ciara’s worried deep down, she’ll no doubt feel like she has to be the voice of reason since Ben was already worried about having an evil kid.

Ciara may even lash out at Susan for blowing into town and planting more doubts in Ben’s mind. She’ll probably push Susan to get lost and let them prepare for their family in peace!

However, Susan will have a terrible sense of dread when it comes to Ben and Ciara’s baby.

Susan will take her concerns to her “bestie” Marlena Evans (Deidre Hall), which will lead to even more problems since Marlena is possessed – and the devil indeed has horrible baby plans that Susan could put in jeopardy.

Days of Our Lives spoilers say Ben and Ciara have plenty of baby drama in their future, so stick with DOOL.

CDL will have tons of other great Days of Our Lives spoilers, updates and news to read up on, so check back often.