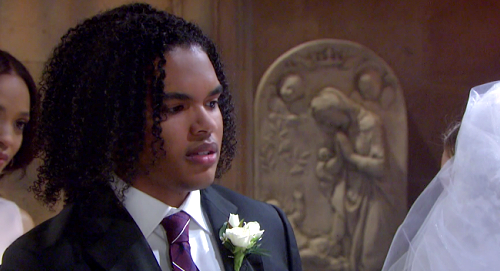 Days of Our Lives spoilers reveal that Ben Weston (Robert Scott Wilson) hijacked Ciara Brady’s (Victoria Konefal) limo. Theo Carver (Cameron Johnson) runs outside after learning Ciara’s missing and sees the limo zooming by. The groom chases it down, but it is speculated Ben loses control and crashes. That crash could be what triggers Ciara’s breakthrough.

DOOL spoilers reveal that before the Olympics cliffhanger, Ben put an extreme plan into action. The reformed serial killer replaced the driver of the limo that was taking Ciara to the church.

Ciara noticed the church but the limo driver didn’t slow down or stop. The bride alerted him that was her stop, which was when Ben revealed himself. Ciara isn’t going to the church but Ben is taking her to the place where they first connected – the old cabin.

Theo was standing at the altar waiting for his bride. When he lifted the veil, he discovered that Ciara wasn’t standing in front of him. Instead, it was Claire Brady (Isabel Durant).

Theo must rush out of the church to find Ciara when he notices the limo zooming by. It is hinted that Theo chases after the getaway limo.

We can’t imagine Theo running after the limo on foot, so we are thinking he must grab a car or motorcycle at the very least.

Meanwhile, Claire and Allie Horton (Lindsay Arnold) are questioned about Ben and Ciara. It is teased that they get in a lot of trouble. The two Salemites might even be taken down to the police station while the police search for Ben and the hostage bride.

Days of Our Lives spoilers reveal that Ben gets injured, which means the limo must crash. If Theo is chasing the vehicle, then he must try to get Ben to pull over.

Instead of the limo slowly stopping on the shoulder of the road, Ben might lose control and crash. That would explain how he gets injured, but that’s not all. There’s more to this storyline and it’s headed toward a positive outcome.

Ben isn’t the only one that gets injured when the limo crashes. It is speculated that Ciara might get another head injury. When the vehicle crashes, Ciara actually helps Ben since he’s too hurt to walk on his own.

The Ciara that was going to marry Theo would have left him there. The only way to explain Ciara suddenly helping Ben is another bump to the head.

Now, Ciara doesn’t remember everything and might not even recover one single memory, but her old personality is back.

So, Ben pleads with her to remember their love story. Ciara begins tending to Ben’s injuries, just as he did for her three years prior.

Suddenly, Ciara has a breakthrough. It sounds like fans won’t have to wait much longer for “CIN” to be reunited.