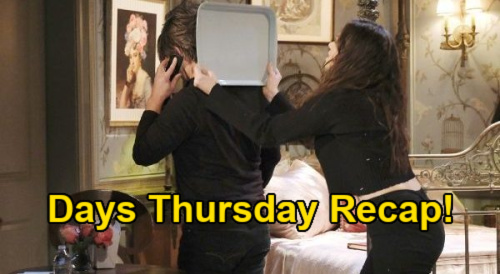 Days of Our Lives (DOOL) spoilers recap for Thursday, February 4, reveal that Lani Price-Grant (Sal Stowers) and Eli Grant (Lamon Archey) pondered the possibility that Vivian Alamain (Linda Dano) could be alive as they talked in their Chicago hotel room.

Eli and Lani deduced that Ivan Marais (Ivan G’Vera) may have helped Vivian fake her death, and Eli remembered that Vivian hid out in a house in Chicago after being in the Nashville warehouse.

Eli called Nicole Brady (Arianne Zucker) to find out where that house was, and Lani and Eli headed over there. At the house, Vivian and Ivan talked about the babies that Ivan had brought to Vivian. Vivian balked that she was too old to raise babies, but eventually Ivan got Vivian to imagine raising the babies.

Vivian daydreamed about reading the twins stories and feeding them caviar instead of baby food, and she imagined teaching the twins to dance. Vivian was soon on board with the idea, and she finally looked at the twins, realizing that one was a girl. Vivian thought that was ok; she’d just name that one “Stefania.”

Meanwhile, Eli and Lani approached the door of the house, but they realized that they couldn’t just go in with guns blazing and they decided to formulate a plan. Soon, Eli and Lani rang the doorbell, and inside Vivian and Ivan wondered who it could be.

At the Brady house, Claire Brady (Isabel Durant) and Ben Weston (Robert Scott Wilson) talked. Ben recounted how his wedding picture to Ciara Weston (Victoria Konefal) had fallen over by itself and broke open the fortune cookie.

Ben said that he felt that Ciara was alive and needed his help. Claire thought that Ben should talk with Marlena Evans (Deidre Hall), and the two of them headed to the penthouse together.

At the hospital, Brady Black (Eric Martsolf) woke up to find Chloe Lane (Nadia Bjorlin) at his bedside. Brady slowly remembered what had happened to him, and Chloe explained that it was likely a mob hit meant for Philip Kiriakis (Jay Kenneth Johnson). Chloe blamed herself, but Brady blamed Philip.

Off-screen, Chloe told Brady the story about how Kristen DiMera (Stacy Haiduk) broke out of prison to come see him after the shooting. Brady was horrified to hear that Kristen held Tony DiMera (Thaao Penghlis) at gunpoint and made her way to the hospital.

Chloe stopped short of telling Brady the rest of the story and she let Brady’s family know that he was awake.

At the penthouse, Susan Banks (Stacy Haiduk) arrived to see Marlena, saying that she had a premonition that Brady was going to be shot. Marlena relayed that Brady had been shot, and Susan reacted as only Susan can. Susan learned about how Kristen broke out of prison, and Marlena offered to let Susan stay the night.

While Susan was in the ladies’ room, Claire and Ben came by the penthouse. Susan freaked out when she returned to the room, threatening Ben with a fireplace poker and calling him the necktie killer.

Marlena eventually talked Susan down, and Claire said that Ben needed to talk with Marlena about Ciara.

Ben relayed the story about the fortune cookie breaking, and he showed Marlena the fortune saying to follow your heart. Marlena then got a text saying that Brady was awake, so she rushed off to the hospital. Susan asked to see the fortune, and she had a big reaction and declared that Ciara was alive.

Back at the hospital, Brady asked Chloe what she wasn’t telling him, and Chloe reluctantly told Brady that Kristen held her at gunpoint and threatened her. Brady reeled as Chloe said that John Black (Drake Hogestyn) had talked Kristen down, and that Kristen later told Chloe that this wasn’t over.

At the location where Ciara is being held, Ciara read a portion of Romeo & Juliet. Rhodes (Jason Downs) entered with Chinese takeout for Ciara, which made Ciara nostalgic for Ben. Rhodes noted that Ciara and Ben wouldn’t ever be sharing a meal together again.

Later, after eating some of the food, Ciara faked food poisoning and cried out for help from Rhodes. Rhodes didn’t really take Ciara seriously until she collapsed on the floor, apparently going unconscious.

Rhodes was calling someone for help when Ciara hit him over the head with a tray. “Hang on, Ben, I’m coming home,” Ciara said.

There’s definitely a lot going on right now on Days of Our Lives, so stay tuned! Stick with DOOL and don’t forget to check CDL regularly for the latest Days of Our Lives spoilers, daily episode recaps, and news.