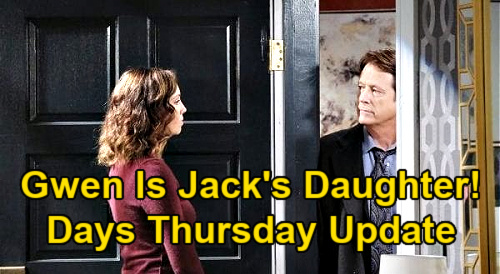 Tony jabbed at Jake, calling him a “grease monkey” and musing at how Kate was dating Vivian Alamain’s (Louise Sorel) son. Kate reminisced about some of the things that Vivian had done to her over the years, and she defended Jake to Tony.

Tony wondered what would happen when someone younger came into Jake’s view. Kate got peeved and left in a huff.

At Statesville Prison, Chad sat down with Wilhelm Rolf (William Utay) for information about Gwen. Rolf tried to deny knowing Gwen, but Chad said that he knew Gwen had come to visit him in prison.

Chad said that he was sure that Gwen was the one who cut Rolf loose from his ropes last October during the blackout, and finally Rolf decided to spill the beans.

Rolf told Chad that Gwen showed up in Salem last spring for the drug that she used to scramble Abigail DiMera’s (Marci Miller) brain. Chad reeled, saying that they didn’t even know Gwen then.

Rolf said that Gwen was plotting to destroy Abigail’s family for a long time, and he agreed to tell Chad everything.

In town square, Anna DiMera (Leann Hunely) saw Gwen walking along with her suitcase, and she put a foot out to trip Gwen. Anna then confronted Gwen about the article in The Intruder, and she noted that Gwen would pay for going after the DiMera family.

After some bickering, Gwen said that she wasn’t finished with Abigail or her family.

At the Horton house, Jack Deveraux (Matthew Ashford) and Jennifer Deveraux (Cady McClain) learned from Abigail that Chad slept with Gwen. After rehashing the things that Gwen had done, Abigail got upset and went upstairs to check on the kids.

Jack and Jennifer wondered exactly what Gwen could have against Abigail.

Jack then got a call from Anna, warning him about how Gwen said that she wasn’t finished with Abigail or her family. Jack and Jennifer decided to head over to the Salem Inn to confront Gwen.

Later, Chad arrived to see Abigail, and he relayed that Rolf knew Gwen and had been helping her.

Chad said that Rolf knew why Gwen hated Abigail, and Abigail wanted to know why. “Your parents should be here,” Chad said. Abigail insisted that Chad tell her, and Chad said that Abigail should sit down.

Gabi said that she had a business offer for Jake regarding the resurrection of GabiChic. Jake said to submit a proposal, and he’d go over it.

Gabi noted that she was willing to mix business and pleasure. “We were really good once and could be again,” Gabi cooed.

Jake said that he was seeing Kate, and Gabi needled him about dating a great-grandmother and about how Kate was a rebound. Soon, Gabi moved in for a kiss, just as Kate walked in the room.

Back at the DiMera mansion, Anna arrived and learned from Tony that Chad stepped down from DiMera Enterprises and that Jake was the new CEO. “That’s not going to end well,” Anna said.

Anna told Tony that Gwen was staying in Salem and that she was going after Abigail and her family. “Why is Gwen doing all this?” Anna wondered.

At the Salem Inn, Gwen was settling into her room when Jack and Jennifer arrived demanding answers about why she hated their family so much. “Maybe it’s time you knew,” Gwen said, inviting Jack and Jennifer in.

Gwen then proceeded to stall, and Jack and Jennifer demanded to know what was going on.

Jack blustered about why Gwen was taking out all her anger on Abigail. Gwen said angrily that all Jack cares about is his precious Abigail. “Well guess what, she may be your daughter, but so am I,” Gwen said. Jack looked aghast.

That was a terrific episode of Days of Our Lives, and there’s much more to come tomorrow on the NBC soap. Stick with CDL and we’ll keep you posted on all the latest Days of Our Lives spoilers and news.