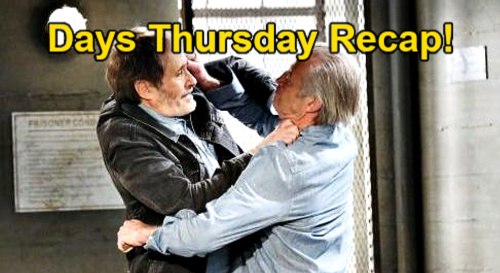 Days of Our Lives (DOOL) spoilers recap for Thursday, March 4, reveal that Ben Weston (Robert Scott Wilson) dreamed of finding Ciara Weston (Victoria Konefal) and woke up in his apartment with a start.

Meanwhile, at the place where Ciara’s being held, Evan Frears aka Christian Maddox (Brock Kelly) brought Ciara a fake newspaper saying that Ben had been killed in a motorbike accident. Ciara was horrified.

Over at the hospital, Marlena Evans (Deidre Hall) woke up in John Black’s (Drake Hogestyn) room, then learned from Sarah Horton (Linsey Godfrey) that there was no medical explanation for John’s blackout last night.

Marlena got a call from Ben and stepped out of the room, and Roman Brady (Josh Taylor) entered and learned about John’s run-in with Charlie Dale (Mike C. Manning) last night.

Roman checked his phone and learned that Charlie was dead and there was a suspect in custody. Later, John was alone and remembered hearing a gunshot. Over in Marlena’s office, Ben got her up to speed on his most recent dream about Ciara.

Ben wanted Marlena to hypnotize him so he could remember more about where Ciara was being held.

Marlena balked, saying that hypnosis wouldn’t work in this case, but Ben insisted, so Marlena gave it a try. Under hypnosis, Ben saw Ciara’s books, and he saw her crying. Ben then had a vision of finding Ciara, and Ciara had the same vision, thinking that it was a sign from Ben that he wasn’t really dead.

In their shared vision, Ciara told Ben that Allan Rhodes (Jason Downs) was dead and that someone else had her. Before Ciara could tell Ben who had her, Ben’s phone rang and this woke him up from hypnosis.

At Statesville, Orpheus (George delHoyo) angrily left a message for Evan in the recreation room. Clyde Weston (James Read) came in and needled Orpheus about talking to his son again.

The men argued, with Orpheus basically telling Clyde to stay out of it. Clyde whipped out a switchblade and stabbed Orpheus, who fell to the ground unconscious.

Clyde took Orpheus’ phone and called Evan, pretending to be an associate who worked with Orpheus. Clyde learned that Evan planned on making Ciara pay and suffer, and when Evan hung up on Clyde, Clyde called Ben, which is the call that woke Ben up out of hypnosis.

Clyde told Ben that he had news about Ciara.

At the Salem PD, Rafe Hernandez (Galen Gering) and Sami Brady DiMera (Alison Sweeney) bickered in the interrogation room. Sami refused to answer Rafe’s questions without a lawyer, and she called Belle Black (Martha Madison) to come help her.

Belle barely agreed to come, but she showed up at the police station to see Sami.

Belle was not at all interested in representing Sami, given how Sami had brought Jan Spears (Heather Lindell) back to town. Belle soon learned that Sami was under suspicion for shooting Charlie, and Sami swore to Belle that she didn’t do it and that she didn’t touch the gun.

Belle said that if Sami was lying to her, that she’d quit. Sami insisted that she was telling the truth.

Out in the squad room, Allie Horton (Lindsay Arnold) arrived and wanted to see Sami, but Rafe refused to allow Allie into the interrogation room. Allie wanted Rafe to just drop the investigation into Charlie’s murder, but Rafe said that he couldn’t do that.

Allie left, and Rafe got the results from ballistics and went to see Sami and Belle.

Belle demanded that Rafe release Sami, but Rafe refused, saying that he had evidence against her. Belle asked what Rafe had, and he said that the ballistics came back, and that Sami’s prints were all over the gun. Belle turned to Sami, looking furious.

Finally, at Nicole Brady’s (Arianne Zucker) apartment, Allie was alone when Roman showed up to check in on her. Roman shared that there was a suspect in custody, but that he didn’t know who it was. “I know who it is,” Allie said. “It’s my mom.”

There’s definitely a lot going on right now on Days of Our Lives, so stay tuned! Stick with the NBC soap and don’t forget to check CDL regularly for the latest Days of Our Lives spoilers, daily episode recaps, and news.