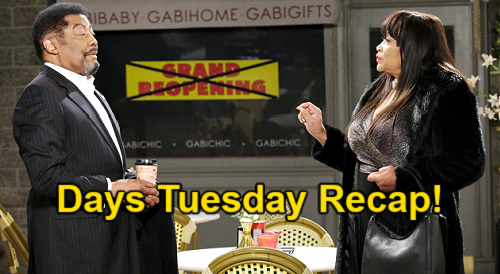 Days of Our Lives (DOOL) spoilers recap for Tuesday, March 9, reveal that Kate DiMera (Lauren Koslow) got irritated with Jake DiMera (Brandon Barash) as they were working at DiMera Enterprises.

Jake couldn’t stop talking about Gabi DiMera (Camila Banus), and Kate had had enough. Kate said that the thought that Jake was using her to convince himself that he doesn’t have feelings for Gabi, and she left upset.

Lani revealed that Paulina spoiled her as a kid, and that before she met her husband George, she had a hard life.

Lani said that Paulina had made a fortune at commercial real estate, and later a gift showed up for the twins – two silver spoons.

In town square, Paulina ran into Abe Carver (James Reynolds) and inquired about the old GabiChic storefront. Paulina said that she wanted to get into the mix and possibly acquire the space, and just then Kate came along and said that she had already rented the storefront.

Paulina scoffed, saying that the contract wasn’t executed yet.

Kate seemed put off, and Paulina asked Abe about whether there was equal representation in town square, and whether there were any Black-owned businesses there.

Abe agreed to introduce Paulina to the landlord, but he said that the rest was up to her. This agitated Kate, who walked off in a huff.

At the DiMera mansion, Chad DiMera (Billy Flynn) quizzed Anna DiMera (Leann Hunley) about why she didn’t want him to go to the cellar. Anna made up lame excuses, and Chad completely saw through them.

Down in the cellar, Gabi stopped Abigail DiMera (Marci Miller) from stabbing Gwen Rizczech (Emily O’Brien) with the syringe.

Abigail was peeved, and she and Gabi argued while Gwen sat still tied up. Gabi refused to help Abigail drug someone, and she kicked Abigail out of the cellar.

Gwen then tried to strike a deal with Gabi, saying that she wouldn’t implicate Gabi if Gabi freed her. Gabi agreed, and she cut Gwen loose from the ropes.

Abigail went up to the living room and encountered Chad with Anna. Anna skedaddled, and Chad demanded to know what Abigail was doing down in the tunnels. Just then, Gwen emerged from the tunnels, accusing Abigail of kidnapping and trying to drug her.

Chad was stunned, and Abigail admitted that it was all true. Gwen took off for the police station, saying that she was going to make Abigail pay.

Chad was quite upset, and a huge argument ensued between him and Abigail, who was defiant about her actions. Chad couldn’t believe that Abigail would risk going to prison, but Abigail said that it would be worth it. Chad walked out, upset.

Back at DiMera Enterprises, Gabi went to see Jake to discuss how she had just stopped a murder. Off-screen, Gabi told Jake the whole story about Gwen and Abigail, and Jake wondered why Gabi was telling him all this.

Gabi said that Jake was her only friend, and Jake noted that they weren’t friends.

Gabi then let it slip that Abigail had agreed to help her get Jake back, and Jake reeled, telling Gabi in no uncertain terms that he was in love with Kate and that they weren’t getting back together. Gabi was hurt, and she left, saying that she would never be back.

Finally, Gwen entered the Salem PD squad room with bravado, saying that she wanted to report an attempted murder. Eli responded with exasperation, saying that he was tired of Gwen’s unfounded allegations against Abigail.

“It’s hard to believe my cousin would do that,” Eli said in response to Gwen’s story. “We aren’t family counselors. You’ll have to work this out yourself,” Eli said. Gwen left frustrated.