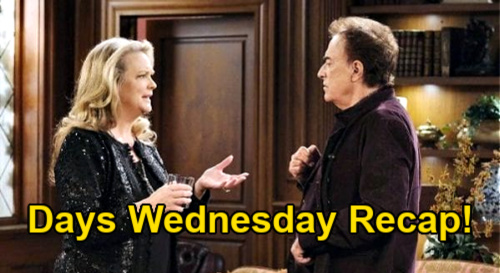 Tony DiMera (Thaao Penghlis) called from the hospital, saying that there was a family crisis in progress.

Meanwhile, from the hospital, Philip Kiriakis (Jay Kenneth Johnson) called John Black (Drake Hogestyn) to say that Brady Black (Eric Martsolf) had been shot. John and Marlena Evans (Deidre Hall), who were at the pub, rushed off.

In Brady’s room at the hospital, Brady was unconscious as Kristen DiMera (Stacy Haiduk) held Chloe Lane (Nadia Bjorlin) to task for what happened to Brady.

Chloe figured out that Kristen busted out of prison, while Kristen learned all the details about why Brady got shot. Kristen whipped out her gun and held Chloe at gunpoint.

Out at the nurses’ station, Chad arrived to join Tony and quickly learned about Kristen escaping from prison while holding Tony hostage. John and Marlena arrived next, and John rushed in the direction of Brady’s room.

John walked into the room just as Chloe was finishing the story of Brady getting shot.

John did his best to try to talk Kristen down, and eventually he succeeded in getting Kristen to leave the room. Kristen went out to the nurses’ station where Marlena, Tony, and Chad were, and Marlena talked softly to Kristen to get her to relinquish her gun.

Kristen finally gave John the gun and broke down in Marlena’s arms.

Back in Brady’s room, Chloe rehashed all the details for John about how the Vitali crime family was after Philip but shot Brady instead. John didn’t blame Chloe, and Chloe was grateful for that.

Chloe left the room, and John urged Brady to wake up and told him that he’d be ok.

Tony, Chad, and Kristen went into some room and the brothers tried to convince Kristen that she had to turn herself in. Kristen didn’t want to do that, but eventually she did, and she apologized to Tony for taking him hostage. Chad called hospital security to give them Kristen’s location.

Back in Brady’s room, John was still talking to Brady when Marlena came in and comforted him. Marlena wanted to cancel Allie Horton’s (Lindsay Arnold) therapy session for this afternoon, but John insisted that she help Allie while he stayed with Brady.

Back out near the nurses’ station, Kristen was being led out by the cops when she spotted Chloe. Kristen told Chloe that this isn’t over – not even close. Chloe looked unnerved as Kristen got on the elevator with a cop and left.

At the Kiriakis mansion, Victor Kiriakis (John Aniston) heard from Xander Kiriakis (Paul Telfer) all about the trouble that Philip was in with the Vitali crime family. Philip walked in and broke the news that Brady had been shot. Victor was horrified and wanted to go to the hospital, but Xander and Philip urged him to stay put.

Philip then explained that the Vitalis were aiming for him but shot Brady instead, and he attempted to blame Xander for destroying the shell company and causing this whole mess. Xander and Philip started bickering and blaming each other, and Victor put a stop to it by saying that he wanted to talk with Philip alone.

Xander took off, and Philip explained that he should have told Victor about the Vitali situation sooner, but he was ashamed and that he would work hard to win back Victor’s trust. Philip asked for forgiveness, and Victor said it would depend on whether Brady survived.

Xander returned with hopeful news about Brady’s condition, and he warned that the Vitalis would realize their mistake soon. Xander and Philip started bickering again, and Victor told them both to back off. Victor said that he would handle the situation with the Vitalis.

Abigail revealed to Anna that Gwen had drugged her, and she lamented about how Gwen drove a wedge between her and Chad.

Anna encouraged Abigail to find forgiveness for Chad, and she pointed out how Chad was manipulated by Gwen and that he’s only human. Anna said that if Abigail gives up on Chad, then Gwen wins. Later, Abby called Chad to come by, and Chad arrived feeling hopeful.

Back at the DiMera mansion, Tony and Anna regrouped. Anna told Tony all about what she learned about Gwen, and she asked about how Tony’s visit with Kristen went. Tony sighed and gulped a drink.