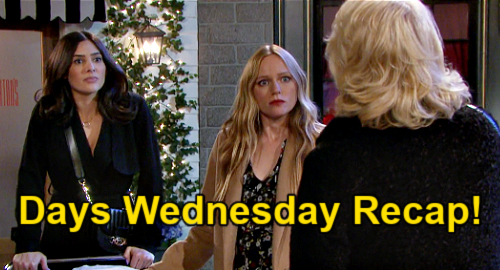 Days of Our Lives (DOOL) spoilers recap for Wednesday, March 3, reveal that Xander Kiriakis (Paul Telfer) was having a seamstress adjust his kilt for the wedding at the Kiriakis mansion.

Sarah Horton (Linsey Godfrey) walked into what appeared to be a compromising position between the seamstress and Xander. Some comical moments ensued.

Afterwards, Xander asked how Sarah’s wedding dress shopping went, and Sarah said that she didn’t find anything, but that she was going to probably go with a Basic Black dress.

Sarah mentioned that she ran into Chloe Lane (Nadia Bjorlin) and that Chloe wasn’t “team Xander,” which didn’t surprise Xander one bit. Xander and Sarah happily kissed and canoodled.

Steve was bristly to Bonnie, who tried to invite Steve and Kayla to join her and Justin. Bonnie ended up leaving the pub in tears.

Justin and Steve subsequently argued over Justin’s decision to spend time with Bonnie, with Steve bellowing about what Bonnie did to Adrienne Kiriakis (Judi Evans).

Steve then attempted to apologize, and Justin tried to explain how Bonnie was good for him. Kayla took Steve outside and reminded him that they should be supportive of Justin’s relationship.

A short time later, Steve and Kayla went back inside, and Steve apologized to Justin for his behavior earlier. Steve acknowledged that he had made mistakes in his lifetime, too, and that it was time for him to forgive Bonnie and give her another chance.

At the Horton house, Jack Deveraux (Matthew Ashford) finished up a call with Jennifer Deveraux (Cady McClain) from Boston, and then Chad DiMera (Billy Flynn) stopped by looking for Abigail DiMera (Marci Miller).

Jack said that he and Abigail got in a big fight earlier, which prompted a huge argument between Jack and Chad.

Chad and Jack sparred about Jack’s decision to support Gwen Rizczech (Emily O’Brien) and to believe that Gwen didn’t kill Laura Horton (Jaime Lyn Bauer). Chad railed on Gwen, rehashing everything that Gwen had done, and Jack fired back that he was trying to protect Abigail from going over the edge again.

Chad fumed, saying that Abigail might go over the edge if Jack continues to support Gwen, and he nearly broke down saying that his relationship with Abigail may never be what it was. “I don’t want that to happen to you, too, Jack,” Chad said before leaving in a huff.

At the Salem Inn, Gabi DiMera (Camila Banus) and Abigail argued as Gwen lay unconscious on the bed. Gabi wanted praise from Abigail for coming through by drugging Gwen, and Abigail griped about how they didn’t know what they were going to do with Gwen now.

Gabi and Abigail ended up dumping Gwen into a laundry cart from the hotel and covering her with sheets and blankets.

As Abigail and Gabi were rolling the cart through town square, Bonnie came along and wondered what they were doing.

Bonnie guessed that they had a body in the cart, which caused some tense moments, and Gabi and Abigail ended up explaining that they had the new GabiChic designs in the cart. That seemed to placate Bonnie.

Bonnie then sat in town square eating a dessert when Justin came along. Off-screen, Justin told Bonnie about Steve’s apology. Bonnie apologized for putting Justin in the middle, and Justin said he wasn’t in the middle – that he was on Bonnie’s side.

Meanwhile, Abigail and Gabi rolled the laundry cart into the DiMera tunnels. Gabi took over from there and tied Gwen to a chair, leaving her there for the night. Abigail went up to the living room via the tunnels and immediately ran into Chad.

Chad apparently hadn’t seen Abigail come out of the tunnels, and he asked what Abigail was doing there. “Moving back in, like we talked about,” Abigail said.

Back at the Brady Pub, Steve and Kayla sat down for dinner and were happy to finally have some time alone. Just then, Jack rushed in and made himself right at home at the table.

Jack lamented that he just made the whole situation with Gwen and Abigail worse. “Tell us all about it,” Steve said.